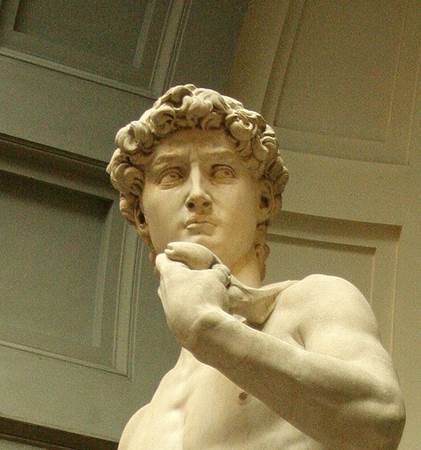 My uncle obtained reservations for us to see him in Florence, Italy. Reservations! How great can he possibly be that so many people flock to him, that we have to have reservations at a specific time? And even then, we stood in line waiting to press through the doors, to be the first ones of the day. Everyone said, if you’re going to be in Florence, you have to see David! Since my uncle was making arrangements and my mom was paying for them, I said, “OK, I’ll go, just to say I did it. But it’s just a man.”

I know what he did, and it’s a heroic deed, slaying a giant. I’m sure it’s difficult and tiresome to be an icon not only of Biblical parable but of every successful underdog throughout history, to be a perpetual metaphor for struggle and the calculation of odds. Perhaps only stone can withstand this pressure. Still, why is this depiction so much more fascinating than any other representation of him? 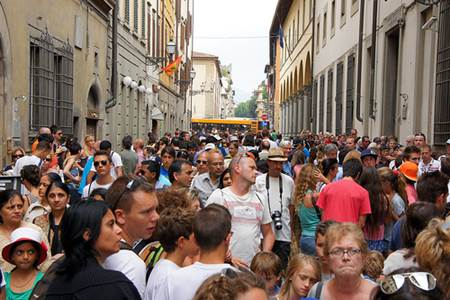 I know about the master artist who created him. There’s no denying Michelangelo was a man of rarely paralleled genius and talent. A man who could be admired merely for being so prolific, if not for the quality of his work, though the latter certainly cannot be doubted. He was a man with passion, a quality which can’t be underestimated in its influence on the artist who possesses it. Still, this is just a statue. Why so much more remarkable than any other marble statue?

I came to the long corridor in which he stands at the far end beneath a dome of frosted windows on a tall, round pedestal. The corridor was lined with other works of the master artist, works which some think are not finished, but which an inspection of the master’s own words indicates that, in fact, they are. Works in which people are emerging from the stone half-formed, so that they are still in union with the marble, they are still one entity — half human feature, half lump of quarried stone.

These creations are interesting, I thought. Not just another muscular dude standing in a pose, not just another reclining lady with plump breasts and a faint smile. They have life and breath in them, they have a projected direction in time. Because of their transitory nature — a documentation of emergence — they have energy. They’re creations of potential energy, as in a coiled spring — energy that is the result of relative position instead of motion. 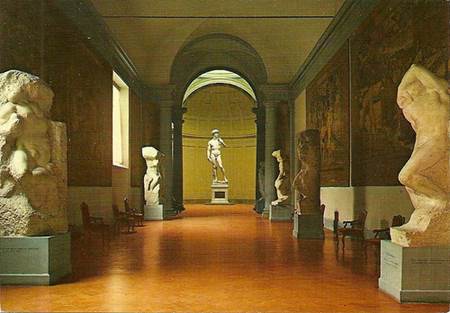 Among these, above these, David stood alone, edified. I thought he must be part of the phenomenon of mindless popular opinion. People tell you something’s great; you go and see it and tell everyone it was great; now you’re part of the club who’s seen this great thing. Frankly, I did not want to like him. I wanted to say, “Eh, nothin’ special. What ever is all the fuss about?”

OK, so the craftsmanship was rather admirable … the veins in the arms, the muscles in the legs, all so defined — the details of a body that make it a biological entity, one of organic complexity yet with a machine-like structure, in which all the levers and gears and wires and weights must work together. It took my eyes awhile even to make their way up to where I could see the rock and then the sling in his hands. At first I thought that was what “made” him — the sling and rock, the mechanism which identified him as the man who slayed the giant; without them in his hands he would be only another man.

I circled around again and looked up into his face. In perhaps one of the most bonafide experiences of magic, the stone face came alive as if waking from a long dream. More and more alive, until finally I was drawn to look into his eyes. Not at the eyes, but into them. 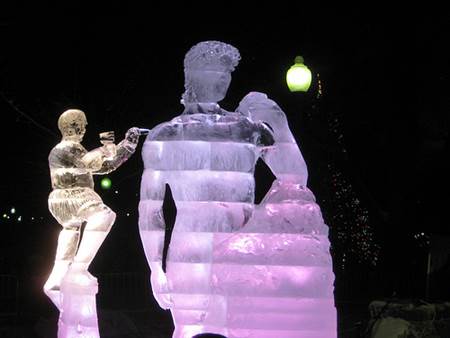 I thought about who this David is and what, at that moment, he’s facing, what he must be feeling. I could see the giant, Goliath, before him, pacing menacingly, letting his anger build until he’s ready to explode with violence. David stands still and calculating. He stands fearful, perhaps terrified, but calmly determined. He is in a transcendental moment, sizing up the universe from which he cannot escape.

With a sudden force, like a wave that has built and then crashes on the shore, it was overwhelming. Tears welled up in my eyes. What the hell is wrong with you? I admonished myself. I overheard another guy say to his companion, “I can’t believe the reaction I’m having to it.”

I couldn’t believe mine either. It wasn’t the rock and sling that defined David, but the thoughts behind his opaque eyes. The stoic gaze that veiled and yet revealed a mind burdened with intense thoughts and emotions, a mind recognizing the vulnerability of its humanity while urgently plotting a super-human task. His arms and body posture are not tensed up, they seem almost casual and relaxed. The motion is taking place inside. In fact, he is full of the same potential energy as the half-formed men that line the hallway, except the coiled spring isn’t in the human form but concentrated behind his eyes in the form of a planned, projected and imminent action. 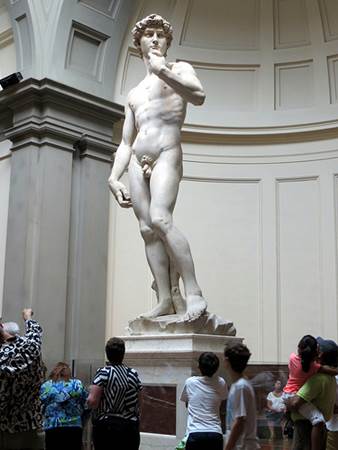 Had I been alone, I would have spent more time with this man, but I became acutely self-conscious of the tears I couldn’t stem when I was looking into that face. So after several minutes of scrutiny, I turned and walked away. The man faded to stone, the immortalized feat turned back to inanimate words offering a legend.

I had approached David with apathy; I returned to the streets of Florence in a daze. Few things in my life have been more unexpected than the emotion bestowed by a marble man.

I read the theory put forth that the statue depicts David not before the battle but after it, looking at the dead giant with satisfaction. I don’t think it’s right. But why does any artist leave his art so cryptic? Why not provide a full explanation … this is what it is, what I think about it, why I made it, what I had for breakfast that morning and what I dreamed the night before? In my heart I think I know the answer … because that would rob us of the joy of epiphany. Epiphany is a sudden understanding, but not an implication of the grasp of an objective universal truth — only a torch lit by a new perception, a light to reveal a different tunnel in the darkness. A new way to approach an old idea, an old artifact, a mute manifestation of a timeless tale.

Shara Johnson plots her travels abroad from her home in the Rocky Mountains of Colorado. She writes literary nonfiction, dabbles in photography and maintains a travel blog about her adventures. You can follow along at SKJtravel.net.Â