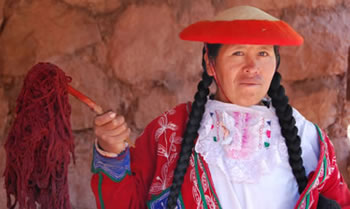 As our red and white bus bumped and clattered over the rough dirt track, I couldn’t help feeling like an unwanted intruder in the vast silence of this top-of-the-world plateau. The altiplano: a stretching sea of purple-green lichen and mustard-grey moss. On the horizon, now looming up menacingly, now distant and serene, the jagged crystalline snow-peaks of the Peruvian Andes.

It was shortly after noon, but we were so high that the sun, even at its zenith, was scarcely out of reach. Its golden light, worshipped since Incan time, brought warmth and beauty even to this barren plain. But I had been in the Andes long enough to know the terrible cold that would descend as soon as the sun disappeared.

Suddenly, from behind an immense lichen-splotched rock, a gaunt and ragged young girl sprang out towards us. Her hands and face were red and chapped and her large, black eyes, deep-set in the hollows of hunger, peered up at us dolefully from under a battered black hat. As our bus lumbered past, she swept off her hat and reached out with it upturned towards us. The round blackness of its hollow crown, like some awful, gaping, hungry mouth, beseeched a motion-blurred gallery of window-framed faces: our bus rolled relentlessly on. 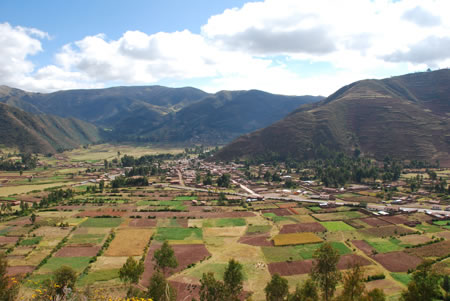 As we slowly serpentined our way down the slope, the gaping black hat and hollow black eyes pursued us. They bounded down the giant stone terraces and followed us hopefully through each lingering bend. Still no one moved. Hastily rummaging through my bag, I found two apples, some bread and a bit of cheese. I called to the driver to stop, and handed them down through the window. The young girl smiled, stuffed the booty into her cavernous black hat and plunked it back on her head.

We continued our descent, dropping into a narrow river valley — a patchwork quilt of green and gold — potatoes, corn, alfalfa and wheat. Near the bottom, nestled like a sleep-curled cat, the village of Chavin.

Our bus clamored noisily down the rough cobble-stone street. Past wonderfully weather-stained buildings, heavy wooden doors and window frames, their soft, time-worn greyness here and there streaked with memories of blue and green paint. We stopped at a flower-filled plaza, and were immediately surrounded by a group of eager-eyed children. Chirping out snippets of English — “Hey Meester! How-are-you-I-am-fine-thank-you!” — they escorted us across the plaza to a large set of doors.

Inside, a courtyard busy with laundry, children, chickens, two horses and a pig: our ‘hotel.’ Our room, at the top of an old ladder, was small and dark. But it had a little balcony over-looking the plaza, and there I stood and watched as darkness and silence enveloped the village below.

The next day I wandered aimlessly through town. An open door: the mingled odors of baked bread, disinfectant and coffee spilled into the street. In the shadowy dimness within, a confusion of plastic, glass, paper and tin. Broad wicker baskets brimming with circles of golden-brown bread. Cans of condensed milk and thick, sweet papaya juice. Cellophane bags stuffed with strange pastas and grains. Cartons of many-colored zippers and threads, razor blades, pencils and candles, cigarettes. 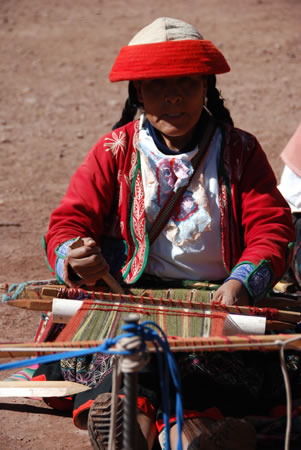 Across from the shop, a black-haired, black-eyed woman sat spinning wool on the smooth sidewalk stones. Her long thick braids and multi-layered clothing — skirt over skirt, sweater over sweater — crimson, lime green, hot pink and deep yellow, made her look like some gaudy over-stuffed church bazaar doll.

In the town centre, a little market where women and girls sat selling — and socializing. Before them carefully arranged pyramids of oranges, onions, potatoes and carrots, heaps of dried herbs, and colorful chickens, bound at the feet and clucking apprehensively. There was a chattering crowd in one corner. In its midst, an ample market-mama crouched behind a small kerosene stove, stirring a cauldron of potato-thick soup.

Multi-colored women and drab bedraggled men stood in loose-knit groups, eating and talking and laughing at stories I couldn’t understand. A couple of round-faced girls darted in and out with trays of hot corn tamales, sweet cheese-filled buns and honey-dripping donuts. The mixture of aromas, sweet, spicy and strong, quickened my appetite despite a recent hearty lunch. Time to move on.

Out to the edge of town and beyond. To where low mud walls capped with sharp-needled cacti enclosed fields of wheat and close-cropped grass. I breathed deeply, savoring the lemony dry freshness of the roadside eucalyptus. And then I heard: “Ola, gringita! Gringeeeeeta! Venga, venga hablar con nosotros!”

A small circle of women and children sat shucking corn in the compound of a stone and thatch hut. They waved and called out again: “Gringita, venga!” As I wandered over to join them, they laughed with embarrassed excitement and shifted around to make a central spot for me.

Questions spilled forth in a sing-song mix of Quechua and Castellano. Where did I come from 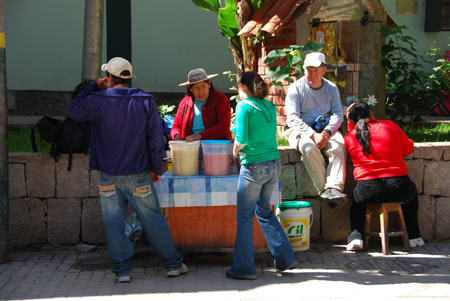 and what was I doing here? But of course ‘Canada’ could just as easily be the moon, and I, with my short, light brown hair and blue-grey eyes was clearly not like them. Children’s hands reached out tentatively to touch my fine, machine-woven skirt, my cream-colored skin, the soft frizzled ends of my wind-dried hair. After each touch, a scampering retreat: two tiny black eyes giggle-peeking out from behind mama’s many skirts.

In a very short time the shucking was finished and a slight, ragged woman rose to go. She said she was going to her uncle’s, on the other side of the village, and asked if I would walk with her. As we started down the path, she told me her name — a long string of Quechua sounds which I tried, unsuccessfully, to repeat. Laughing good-humoredly, she suggested I call her by her Spanish name, Quinta, which means ‘born fifth’ — she was the fifth of seven children, only four of whom were still alive.

Like many of the Andean women I had met, Quinta wanted to know how it was that I, a twenty-eight year old woman, was still unmarried and childless. And why was I traveling alone and so far from my home? For them, these were concepts both fascinating and frightening.

As I scrambled to find simple expressions for complex ideas, Quinta smiled, and frowned, and shook her head, and laughed. “Our worlds are very different, gringita, very different.” Then she became quiet for a time, and I could sense that there was something she wanted to say. Suddenly she stopped in her tracks and blurted it out: “Gringa, do you know of something that will make me have children?”

I turned to look at her again, and saw a slight and ragged woman. Her eyes reminded me of the little waif on the altiplano, filled with a sad kind of hope, a hope that knows its own futility. She told me a little more: “I am thirty years old. I have been married for ten years. Still I have no children. Soon I will be too old.”

I told her that I had only a few vitamins with me: I didn’t think they would help, but I offered them to her. She frowned, and said: “No, I do not think they will help. The year after I was married, I went to the clinic. The nurses were giving women free shots of vitamins, so I got one. But it didn’t do any good.”

I wondered what these vitamins were. I was aware that the drug companies had been testing depo-provera, a long-lasting form of birth control, in third world countries. Had Quinta been given a shot of depo-provera?

By the time we reached the village, its streets were suppertime still. As we passed through its center, a thin, pixie-faced man hailed us. Chattering and gesticulating with inebriated animation, he bounced along with us for a while, then abruptly trip-trotted off, calling back over his shoulder that he would meet us in just a few minutes. As we 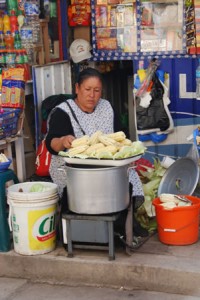 continued through town, Quinta told me that the tipsy elf was her brother, also due at her uncle’s for dinner.

Again I heard that weary resignation in her voice, saw it in the dogged way she plodded up the hill. I thought of the number of times I had watched as these good-natured hard-working women quietly escorted their drunken husbands, brothers and fathers out of the bar and back up the long road to home. For me, it was a sight both touching and tragic, and I wondered at the love, loyalty and kinship bound them, and how deep and strong it ran.

At the edge of the village Quinta stopped to wait for her brother. We sat together on the grassy road-bank, enjoying the last rays of the sun. I heard the faint sound of an airplane — it was high overhead, just a glinting speck in the vast blueness. I pointed up at it: “There, Quinta. There in the sky. That ‘s an airplane, and that’s how I got here.”

She looked up at the little speck, then back at me, then up again, and back, and said: “But gringa, how did you get up there?” I smiled. “The airplane comes down to the ground.” I gestured towards the road. “It lands at a place like this, on a road.” Again she looked up and back at me. Her next question wasn’t so easily answered: “But gringa, how did you make yourself that small?”

I realized that no amount of explaining would help Quinta grasp the concept of air travel. And what did it matter? Somehow I had arrived here, where she was, and by chance we had met. That was all.

“Sometimes with friends,” I answered, “but mostly alone.”

An anxious brightness filled her eyes. “Aren’t you afraid?”

It seemed such a simple question, but my answer got caught in that gap between cultures. Could I have said 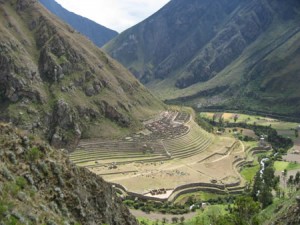 that the cold that I fear is one that no number of skirts or sweaters can keep out? Could I have explained that thought I did feel cold here, I did not feel The Cold?

In the uncertainty of my silence, Quinta’s concern intensified. “Gringita, where are you going to sleep tonight?”

“At the hotel, in the village.” I answered.

“But gringita, how will you keep warm? Don’t you feel the cold?”

Caught again in that gap. How could Quinta, who relied on her family for warmth, understand my pile of blankets and quilts? Puzzled, perhaps dismayed, Quinta turned from me briefly and scanned the road for her brother. Turning back to me, she softly admonished, “Gringita, you must go back now. If you get cold, you will never get warm.”

I reached down to embrace her, trying to form some kind of bridge across that persistent gap, and said, “You will. You are in my heart, and I am in yours.”

I felt her arms close around me for a moment, and for that moment we were just two women, two women from worlds apart, who had met by chance, and who had taken the chance to share who they were with one another.

Jules Atkins is a traveler, writer and midwife who lives in British Columbia, Canada. She has traveled extensively in Asia and South America. She particularly enjoys making connections with local people and getting to know more about their cultures and their lives. If you would like to read more articles by Jules, you will find them at www.julesatkins.blogspot.com and www.atkinsinmotionmexico.blogspot.com.