Home / WanderTales / Latin America / When All You Have is Your Body 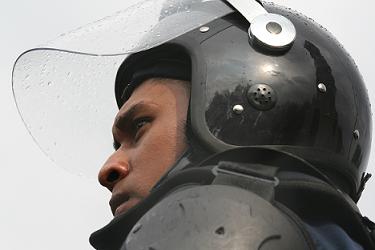 I am hurtling down Avenida Reforma, one of Mexico City’s main arteries, in one of the ubiquitous green and white Volkswagen taxis that everyone–tourists and locals alike–waits for. I favor nostalgia and its slight discomforts over the newer red and white Nissan Sentra taxis, which have no personality as far as I’m concerned. Nearly every block features an impressive monument rising up from the center of the avenue, each of which eventually becomes just another detail in the backdrop of life’s daily shuffle here in the capital city.

Mexico City, Distrito Federal (or D.F. to the locals), is a fascinating place where the old and new, the urban and the rural don’t so much collide as co-exist. Step into the heart of the city

and you’ll find business people in suits, as likely to make important transactions over a lunch of sushi as over a one-peso huarache, or an ear of roasted corn bought at the corner food stand. Alongside the business people you’ll also find men and women in indigenous clothing sitting on blankets on the sidewalk where they sell handcrafts, gum and phone cards.

Many people who come from the pueblos to make temporary homes in the city have no plans to stay. They come to make money and go home. But they also come for a reason that is equally as urgent to them, and that is to bring their political and social concerns from the countryside here to D.F., where they hope to attract attention for various causes: the alleged abuse of elderly people, illegitimate politicians who were not elected, land seizures and the

like. These campesinos, who form part of a movement known as 400 Pueblos, build tent cities on the side of Mexico City’s busiest thoroughfares, where they cook and live and protest, using the visibility of their location to bring abuses that are invisible to city-dwellers to the attention of the government, Mexico’s urban citizens and to tourists. 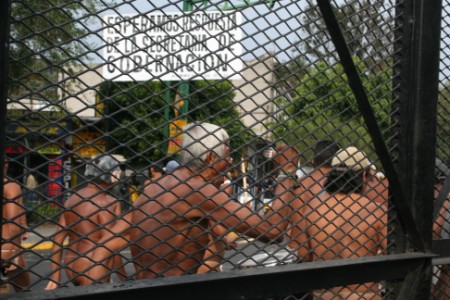 From the taxi I notice the nude and semi-nude men, who have grouped more than 100 strong, around one of the city’s most important statues, one that is strategically positioned in the middle of a round-about where the city’sprincipal avenues converge. I ask the driver to stop and let me out, and I watch the men, entranced. They march, single-file, around the statue, not shouting, not waving banners, not doing any of the things one typically expects of a protester. Some of the men are completely nude, their penises hidden only by a photo of a politician, which is secured to their hips with string. Most of the men, though, are in their underwear, with little else other than shoes–tough, worn-in work boots or sandals–or hats to shield them from the alternating chill and heat of a typical day in Mexico City.

They range in age from young boys to elderly men, some handsome, some not, some thin, others obese. Some are wearing briefs, others boxers. 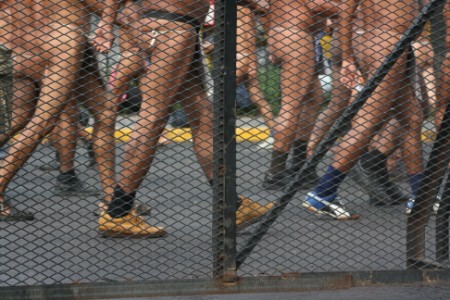 Some underwear looks newer, but most is threadbare. The men do not appear to be having fun–it is obvious that this is not gratuitous exhibitionism–nor do they appear humiliated. They simply look determined, as if they believe completely that their presence in this place, on this day, matters. What strikes me, as I stand on the sidewalk, is how powerful a statement they are making, and I wonder how anyone could
ignore them.

The protest goes on for weeks and stretches into months. The men are marching every day, all day. Their behavior provokes a range of reactions. Commuters complain that the men’s presence, coupled with other protesting groups at other key spots on Avenida Reforma, is adding to already significant traffic woes of the city. The novelty of the men’s nudity having worn off, they have become a nuisance, an inconvenience, and newspaper editorials urge the 400 Pueblos members to pack up and go home.

The police who are assigned to the nude protest beat have also tired of the march. “We are here to protect their right to march,” one officer tells me, when I ask him about the 400 Pueblos protest and inquire about the fact that he’s not carrying a service gun. “We must permit them to feel safe. And to ensure that they have the right to freely express their concerns, we don’t carry guns. But to tell you the truth, this is all becoming very tiresome.” Even some of the marchers, in their dogged determination, begin to wonder whether their unusual form of political activism will achieve its ultimate goal, which is the rectification and redress of wrongs committed in the pueblos.

“We are humble men,” one marcher tells me when I ask about the protest and its effectiveness. “We have nothing but our bodies and so we are here. The government does not listen to us, so we must present our concerns in another way. We don’t know if it will work, but we must continue to try.”

At the end of August, when the men and the women and children who accompanied them to the city decided to pack up and return home, it remained unclear whether the protest had achieved its desired goal. While the protest brought attention to the concerns of the campesinos, it did not unseat Veracruz Senator Dante Delgado, who has been singled out as the figure who symbolizes the worst of all the campesinos’ complaints. Nonetheless, the members of the 400 Pueblos movement, who plan to continue their activism and who will likely return to the city, recognize that change–particularly when it involves bureaucracy–is slow.

Although the nude march went on for months, and attracted international media attention, the men and women understand that their fight will continue, using the only means that are available to them.

This article was originally published by Matador.

Julie Schwietert Collazo is a writer and editor specializing in place-based writing in Latin America. Find more of her work on MatadorNetwork, Planet Eye, and on her website, Collazo Projects.