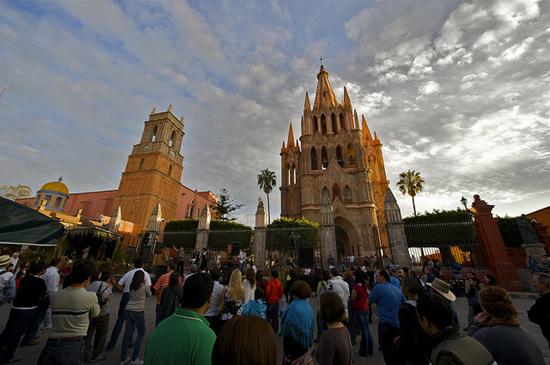 For two hours, I had been sitting on the hard edge of the uneven curb, wedged between two squirming toddlers and a plump grandmother. Knees behind me jabbed my shoulders and banged my head. I was tired from all the smiling and nodding in lieu of language, since I couldn’t speak the simplest sentences of Spanish.

I was in San Miguel de Allende, visiting friends who had moved to this colonial town in the mountainous region of central Mexico, about 170 miles northwest of Mexico City. It was Semana Santa or “Holy Week,” and this usually quiet, small town now bulged with foreign and Mexican tourists, and families from surrounding villages who had come for the Easter festivities.

A sudden hush swept through the crowd. Languid bodies quickly straightened up and heads turned to face the women approaching with heavy, ponderous steps.

I gasped at the sight of the ten women dressed in black with lace shawls draped over their heads. With white gloved hands, they gripped the carrying poles of a heavy platform balanced on their shoulders. White and red gladiolus, tuberose and carnations covered the platform, and above this floral arrangement, a majestic angel loomed against the blue sky.

Below the delicate spread of wings was not the usual angelic expression of peace and calm.Â  Instead, its head was pulled back at an odd tilt, a cry frozen on its lips, eyes wide with a sorrowful horror at the object of death clutched in its hand. Angel after angel appeared, unfathomable grief in their faces and postures as each grasped an object associated with Jesus’ suffering – the bloodied whip, sword, spikes, crown of thorns. Some say that these nameless winged creatures had come to be with Mary as she grieved the suffering and loss of her child. 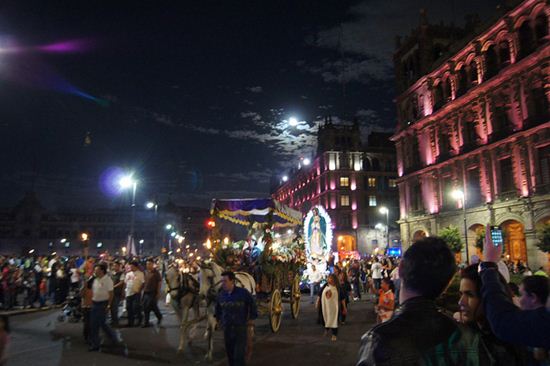 A deep emotion pervaded the atmosphere. Somber faces riveted their gaze on each passing statue — angels weighed with grief, saints with pale, drawn faces, Mary with tear-stained cheeks, and Jesus streaked with blood, hunched under the burden of the cross, or entombed in a glass casket. Under the reverent attention of the silent bystanders, the hundreds of participants and heavy statues wound their way through the narrow cobblestone streets.

The statues of Semana Santa captivated me. Equally moving were the people’s depth of emotion, whether they were participants in the pageantry or bystanders watching the processions. For them, Holy Week was not just the re-enactment or observance of a long held tradition, but it was also about the experience of absorbing and sharing grief and suffering.

As the festivities came to a close and people returned to their usual daily life, I wandered into stores looking at images and icons with renewed curiosity.

At one of the galleries, I met Charlotte, a photographer and part-time resident, and talk turned to the statues. The carver of the large angels, Don Genardo Almanza, was a friend of her Mexican neighbors. He had explained to her that the santero’s (carver of saints) job was to evoke emotion, to move people beyond merely observing into becoming part of the sadness and compassion. Charlotte laid out photographs she had taken of the statues and of a midnight procession she had done with her neighbors. 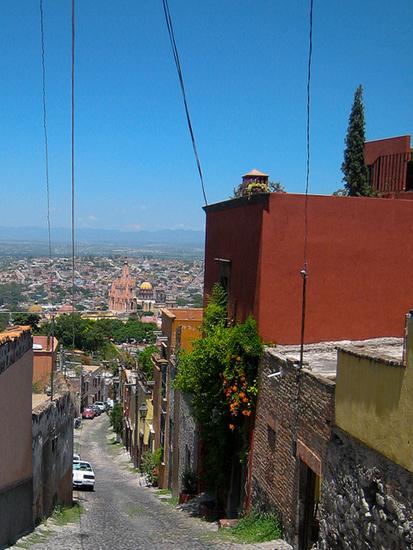 This procession was a tradition that started in 1812 when a devastating plague spread through San Miguel. The neighboring village of Atotonilco sent their statue of Jesus of Nazarene, upon which their church was founded, to help ease the suffering in the town 14 kilometers away.Â  Since then, the tradition has continued every Easter. The much beloved “El SeÃ±or de la Columna,” carved in 1823, was later carried in the procession.

“This is what begins the Easter celebration here,” she said. “At the end, the statue is walked back by the villagers.”

I pulled away from the photographs. “I want to do that walk. How do I find out about it?”

“Just ask around,” she replied.

“El SeÃ±or de la Columna?” my taxi driver repeated. “He goes around midnight from there.” He pointed to the small gray church next to the plaza, collected his fare, and zoomed off.

From there? I sighed, frustrated at my faltering tongue and not understanding Spanish. But I thought it was in the big church on the corner that I saw the scourged Jesus, his bare back and legs streaked with blood. A gold rope tied to the column formed a noose around his neck. At the church doors, the ladies had accepted the loose pesos from my pocket and handed me a postcard of “El SeÃ±or” and a length of purple yarn.

A friend drove me in at 10 p.m. that night. “Here’s something to carry with you,” she said, pressing a shiny object into my palm. With a wave goodbye, she drove away to the comfort of her warm bed. 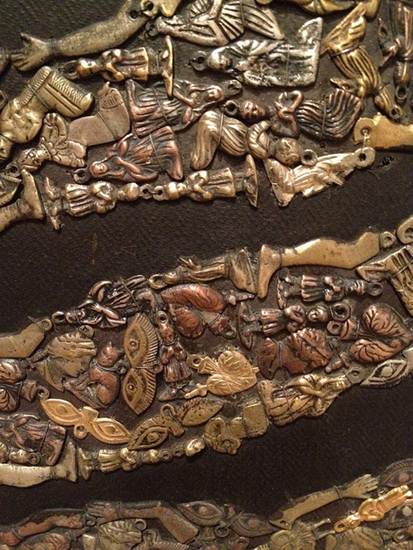 I looked closely at the tiny charm, a milagro in the shape of a pair of eyes, a “miracle” of sight. I strung it onto the purple yarn that I had tied around my wrist.

The small stone church was nearly empty. A few women sat in the pews of the dimly lit room while the men talked quietly near the back. At the front of the church were three figures covered in white cloth. I settled into a pew, and lulled by the flickering candlelight and murmuring whispers muted between the walls, I soon dozed off.

The sound of shuffling crept through my sleep and I jerked awake. I squinted in surprise at the bright lights and throngs of people spilling out in all directions. Bodies quickly pressed aside to make way for the men carrying the platforms with the three wrapped figures. The church bell began to clang noisily in the belfry, and roses, zinnias and marigolds cascaded down on our heads. Outside, fireworks streaked into the sky and burst into colorful bouquets. For a brief moment, the crowd hesitated as fat raindrops landed. Then, tugging at jacket collars and hoods, the crowd surged forward. I moved into step with them.

We snaked through the narrow streets and inched our way toward the outskirts of town. The pale light leaking out of houses and small stores with open doors was enough to illuminate the people lined up along the street, in doorways, and on balconies. Colorful crepe paper flowers arched over the streets, purple and white flags with delicate cutout designs fluttered above, and fresh flowers and palm fronds decorated the posts. My nose searched for the source of a scent drifting past, its fragrance tickling my memory. Then underfoot, I felt a soft velvety carpet. The aroma of mint, fennel and chamomile filled me, as I crossed over this threshold and stepped into the darkness. 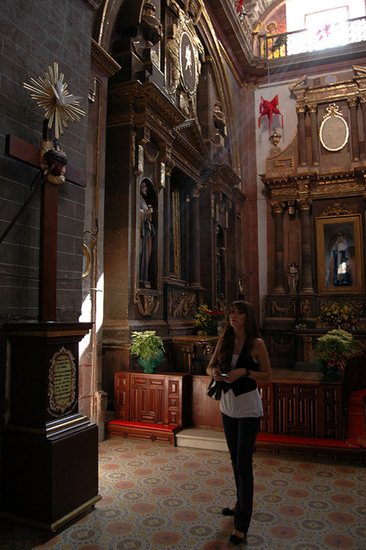 The road was uneven with potholes, crumbling rocks, and broken edges. My foot twisted and I slammed face down onto the rough road. The steady sound of footsteps crunching on gravel filled my ears. I scrambled to pick myself up. There was no time to brush my knees or test my ankle. The crowd pressed onward in the dark.

When the road flattened into smooth asphalt, I relaxed into an easy pace. As the sky thickened into an inky black blanket, stars sparkled, clustered into southern constellations, and a snake tongue of lightning flashed in the distance. I could only see vague shapes of those walking near me, but I sensed their presence as we all moved together, joined in rhythm and shadow.

We had spread out on the wide smooth road. Swinging lanterns appeared from up ahead to corral us onto one side. Then, like a tornado, a freight truck roared past with a sucking swoosh. Footsteps quickened to pull in tighter to each other. When the procession turned onto a smaller road, flashlights and lanterns retreated and faded away. Once again, footsteps relaxed into the velvety darkness that wrapped the vast sky, the mountains stretching past borders, me in my walking shoes and borrowed jacket, and next to me, a barefoot old woman cradling her bouquet of marigolds. 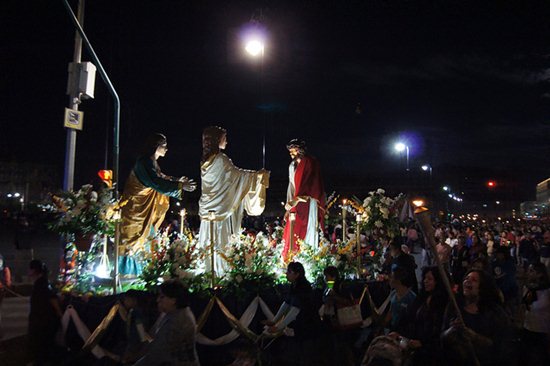 Low, rough voices in the distance caught my ear. I quickened my pace, following the sound until I was alongside the singers — four old men, dark faces under white broad-brimmed hats, grasping small worn prayer books. Over and over, they repeated their songs. A group of old women raised their tinny voices into the air to join them. The voices swirled and swept me up into their refrain. “Tu pasiÃ³n de la Rosa, tu pasiÃ³n de la Rosa.”

Footsteps tread heavier, slower in the last few hours. No one spoke. There was only the darkness and the singular beat of footsteps.

Almost imperceptibly at first, a mist-like grayness spread over the cobblestones and seeped into the stone walls. The walkers, as if signaled by the pre-dawn light, softly dissolved into small mounds alongside the road. Bodies and heads tucked under ponchos, shawls and blankets. I nestled into an open spot and stretched my jacket over me. In the comforting company of those settled around me, I soon fell asleep.

The sky was streaked with orange and pink by the time I awoke to the sleepy stirrings and smiles. People gathered to watch the unveiling of the statues, now resting on a temporary stage below the arches of white crepe paper flowers. The muslin cloth cover was gently pulled off, and forty or so scarves were carefully unpinned and folded so they could be returned to the original owners who save them to cover the faces of their dead relatives. People tiptoed to see each statue being slowly revealed. First the sorrowful St. John, next the weeping Mary, and then at last, the beloved “SeÃ±or de la Columna.”

Finally when the three statues stood before them, a sigh rippled through the crowd. As the platforms were hoisted onto shoulders for the last time, the crowd burst into song, and the procession poured down the street. Nuns smiled and waved from outside their cloister; children skipped alongside the stream of walkers; mothers with babies waved long-stemmed flowers from their doorways. The joyous procession flowed over the stone bridge, through the dusty streets and up the steps to the chapel. 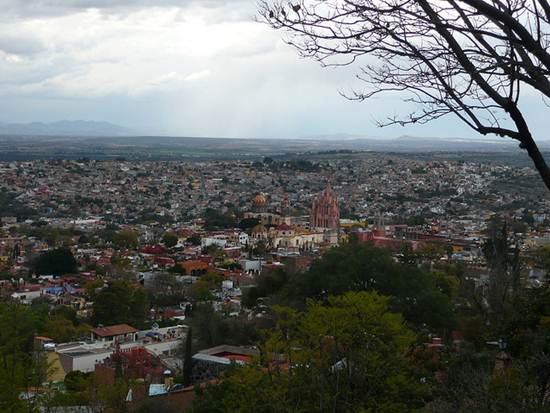 I stepped aside before the chapel doors and watched the people packing into the small sanctuary of Atotonilco. When the painted doors finally closed behind them, I turned to walk down the quiet street toward the main highway where I caught a bus full of villagers on their way to work.

Rumbling across the dry landscape, I stared hard out the window expecting to recognize the road, a tree, turnoff, or mountain shape, but nothing looked familiar. Of course, I reminded myself, it was dark — there was nothing to be seen.

Or was there? The morning spilled into the bus and washed everyone in its golden glow. I touched the milagro on my wrist. I could hear the singing voices rise above the rattle of the bus, and in my heart, I could feel the rhythm of the walk.