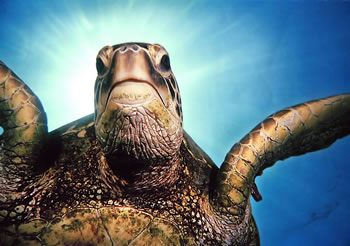 She looms close, lit by the moon. Her head reminds me of an old woman’s wrinkled face wrapped in a shawl. She’s one meter long, weighs about 150 kilograms and is moving fast.

It’s near midnight and I’m huddled with 15 strangers on a beach holding a tarp over our heads to stay out of the rain. Our guide points to a spot a few meters away and we throw off the tarp, hurrying closer. Suddenly no one cares that they’re getting drenched.

The giant green turtle doesn’t stop for us as she makes her way to the water, leaving behind a trail in the sand as wide as a tractor tire. The trail leads back to her nesting site at the edge of the jungle.

This is the Galibi Nature Reserve, one of only a handful of nesting sites for the endangered sea turtle worldwide. It’s located in the former Dutch colony of Suriname on South America’s northeast coast, a country wedged between Guyana and French Guiana.

Four species nest here from January to August: green turtles, olive ridleys, hawksbills and leatherbacks. The reserve is the site of one of the largest leatherback nesting colonies in the world.

For the eco-tourist, adventurer or traveler tired of paying big bucks for the same island beach vacation they got last year, Suriname, South America’s smallest country, is a fascinating alternative: Caribbean attitude with the Amazon thrown in for good measure.

I’ve spent five months working as a volunteer with HIV/AIDS youth groups in the capital city, Paramaribo, and before I leave, my Surinamese friends tell me that I must see Galibi. The place is a national treasure – even people who have never been there extol its white sandy beaches and mammoth turtles.

Paramaribo, whose historic inner city is a UNESCO World Heritage Site, is four hours away from Galibi. The only way into the reserve or nearby villages is via the Marowijne River, a wide swath of caramel-colored water dividing Suriname from French Guiana and opening into the Atlantic Ocean.

My tour group waits by a motorized wooden boat at the beach near a small town called Albina.

Then I smell the toilets. I pay about 35 cents and make my way to a stall. The attendant is out of toilet paper. I get an earful of Sranan Tongo, the local language, as I forget to flush. I dump a bucket of water down the loo and wonder what exactly I’m paying for.

Navigating back to the boat, I climb in beside a fellow Canadian and a Dutch expatriate for the 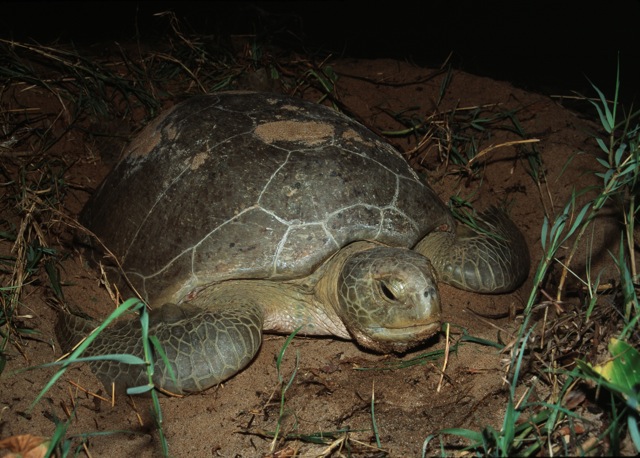 ride to an Amerindian village near the reserve.

George, our guide, was born in the village – also called Galibi – and still lives there.

We head to the reserve after dark; George explains that green turtles nest only at night, but this provides little protection to their unhatched eggs.

Scientists estimate that female green turtles begin returning to their natal beaches to lay eggs when they are between 20 to 50 years old. They return every few years and can lay 100 eggs or more per nest.

They bury their eggs at the sandy edge of the jungle, above the tide line. After watching our turtle waddle back into the water, George leads us to her nest. It’s empty. The sand is too full of roots, so the mother-to-be will release her eggs into the ocean for now, and try again in a few days.

Even if she succeeds, there are natural predators and human poachers, who appreciate the dark almost as much as their prey. Amerindian men gather and sell the giant eggs to Suriname’s Javanese population, who consider them a delicacy.

The government has tried to curb the practice by making it legal to gather eggs laid below the tide line, which would wash out to sea anyway. But conservationists say poaching still exists and they are unhappy with lax laws that do not punish poachers.

George says the country’s conservation agency, Stinasu, does not have the manpower to protect the beach, so rangers chase thieves into French Guiana. If caught in the French colony, more substantial consequences await the poachers.

As we leave the nesting site, awed by these aquatic wonders, I think of the hundreds of eggs released in the water below our boat – none of the turtles we have seen tonight were able to make suitable nests. 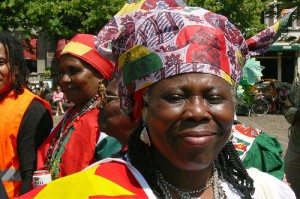 The next morning, Galibi villagers officially welcome us. Their tasseled costumes combine with running shoes and jogging pants.

The men begin pounding their drums, hung from the rafters of a pavilion. Their deep voices blend with the drumbeat. The women pick up the song and motion for the tourists to join them.

Soon, I am stomping my feet and swinging my hands between an 80-year-old woman and a seven-year-old girl, red and white tassels flying, and I see why my Surinamese friends treasure this place: it’s as endangered as the sea turtles it protects.

This story was first published by Canadian Press.