I was once on-duty in Peru as a freelance tour manager. I had exchanged my high heels for knee-high irrigation boots that I sported while I gingerly walked on extremely muddy trails deep in the Amazon rainforest. It was so muddy that you don’t dare look up while walking since a moment’s distraction might cause one to slip and instantaneously be covered head-to-toe with more mud than a pig would know what to do with.

On this trip, I was leading an adventurous group of university affiliates who were a medley of newly acquainted graduate students, alumni, photographers and undergraduates. Often such far-off destinations require solo travelers to join with other independents or groups to create a critical mass that then can go deep into the interior of such a jungle together…and actually live to tell about it.

In such a remote location with no one else around for at least 30,000 acres, planning to be a solo traveler that joins a larger group involves some introspective analysis of how you are best going to take care of yourself given the group size and the intense environment around you. But don’t forget, if the life boat is leaving the 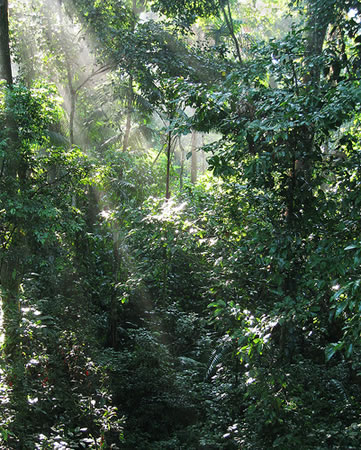 vessel and there’s one seat left that you want to fill, here is what is going to save you: GENEROSITY. What guidebooks forget to tell you about is how important it is for you to consider the wellbeing of the group you have temporarily just joined. However, in a strange twist of this theory, I learned the hard way on my Peruvian journey not to overstep my attempts at generosity.

We were journeying six hours by boat up the Tambopata River. Such a long ride has the potential to wreak havoc on group morale, especially if everyone is just getting to know one another. The possibility for such unease is magnified by the fact that our boat is cigar-shaped, seats a tight fourteen people shoulder-to-shoulder and is powered by a refurbished lawn mower engine that deafens any possibility of conversation. My universal “ice breaker” for such a trip is to carry along a bag of hard candy that won’t take up much space or melt in my bag, but will assuredly please everyone around even if I cannot hear the “thank yous” directed my way above the loud hum of the boat’s lawn mower engine.

The window and isle seat were one and the same, meaning I’ve got a companion to one side and the murky waters of the Tambopata River to my other side. If a spray of water happens to touch me specifically on the lips, I might as well reach for my travel medicine pantry of Cipro, Immodium, or the like. Or if I happen to touch the water, I take the chance of encountering the local population of hungry piranhas just under the surface. 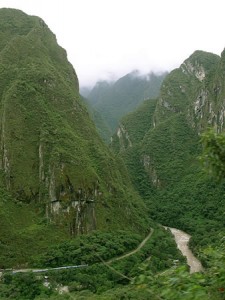 A half-hour passed and we arrived near the shore of the trailhead where a second group was to join us after their hike in search of rare Amazonian otters. As our two boats waited, we passed the time by jeering the opposing boat and betting on what time the otter-viewing group would arrive at the river’s edge. I offered a huge bag of candy to the boat with the most accurate time of the otter group’s arrival. Not five minutes after our bets were placed, we saw the group come splashing through the mud down to the trailhead. As the other boat cheered in victory, I hurriedly got up to bring the other boat dwellers their deserved prize of candy. I was chuckling inwardly about the good-humored banter that the bag of candy had just inspired. I stepped out of the boat and unknowingly took my most precarious step of the trip.. I faintly heard our boat’s guide say a word of caution in Spanish, but it was drowned out by the excited cheers calling me forward onto the muddy bank between our two boats.

Three steps into my journey across the dark brown abyss of mud I started to feel myself sinking into the goop below me. Each step became increasingly labored. Both boats erupted into laughter as I proceeded to sink deeper. “Don’t let the candy go down with you,” taunted one group member in the winning boat. Unfortunately, it was at least ten impossible, mud-sucking giant steps away from my location. My laughter abruptly turned to internal panic as I realized that I had stepped into a patch of quicksand mud. In fright, I glanced back at my boat for much needed moral support. Instead, I was blinded by an array of flashbulbs snapping brightly to capture this unexpected inauguration ceremony of me becoming a permanent cement fixture in this muddy riverbank alongside the Tambopata.

What had I gotten myself into? I could see the guides scurrying around to gather long branches to pull me out. My feet were feeling as if they were glued down to cement. I gathered all of my strength behind each forceful step to pull one foot up and out, and then the other up and out with a giant heave. I finally stepped firmly aboard the winners’ boat and took a deep breath. To my shock, I looked around to discover that it was clear the group never sensed the seriousness of the moment. In their

eyes, the hysterics surrounding my candy bag delivery was nothing more than part of what my boat would painstakingly recall for the next six hours as we rode upstream in the absence of the bag of candy we once had.

I obviously took a different route back to my boat, one that was suggested by our guides. Once I was safely aboard the candy-less boat, the entire group resumed our six-hour ride and only I, the tour manager, was a little more aware of the power of our surroundings. I was also more attuned to the naÃ¯vetÃ© of our group. As we slithered up the river for the next few hours, I subconsciously prepared for what precarious and unplanned occurrences might await us at our destination. I visualized how I might react to hypothetical emergencies that could occur in one of the most remote places on earth. As the waves of murky water continued to splash close to my side, and an occasional water drop landed on my arm, I felt somehow more savvy and yet more vulnerable than I had ever known in my life. Boots or no boots, carrying out generous acts in extreme environments takes carefully executed altruism, but only after you are sure of your own footing.

Editor’s Note – Betty Ann Boeving is a tour guide for hire. You can reach her at: