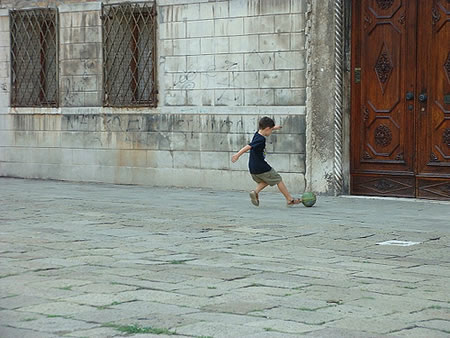 In a part of Lima, Peru with no tourists, there is a street. At night, on first impression, it is a scary street. There is broken glass and stones everywhere and graffiti on the walls of the houses. The houses are small and short and jammed right up next to each other. There are abandoned, broken-down tires strewn carelessly about.

But during the day, things look different. It is bustling with people and taxis and activity. In particular, there is a group of young boys in the street with a soccer ball. They pass the ball back and forth and talk to each other and laugh.

The boys are approached by a young woman who looks to them like she must be from a movie. She is tall, she has blonde hair, and she can barely speak a word of Spanish. She knows the right words to say, but she pronounces them as if they were English words. “Quiero jugar futbol.” “I want to play soccer.” 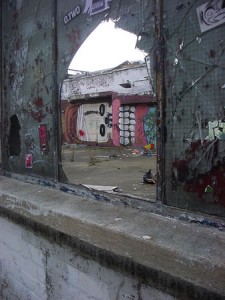 Eventually, the boys start speaking slowly to her. They ask her some basic questions, and she answers. They laugh and laugh, but it’s not clear why. One boy asks her to say: “Peru,” and she does, and they laugh uncontrollably. But just like that, she is accepted. Teams are made, and two rocks are placed in the street, one on each end. It’s not clear how this is going to work. Are the rocks the goals? How can a goal be made with only one rock? But there is no way to ask questions like this. The game begins.

People are watching. A mother stands in the doorway to her house, following the game, expressionless. A group of boys too young to play sits together on the side of the street and talks. There are also a few older men and a teenager, off in the periphery. Are they always there? Or are they drawn by the American girl making a fool of herself?

Every minute or so, a taxi drives down the street, straight through the game. Sometimes the game stops to let the taxi through, and other times the game continues with the taxi as an obstacle. It seems to depend solely on which boy has the ball. Occasionally, the ball careens off the side of a taxi, and one time the ball is even run over and spun up into the air. Astonishingly, the taxi drivers don’t seem to mind. The game continues. Like the taxis, the broken glass and destroyed sidewalk and abandoned tires are part of the field. 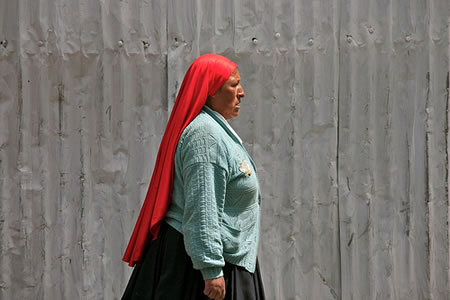 The game goes on and on, for well over an hour. When boys get tired they sit on the sidewalk near their goal, springing up to be the goalie when the other team gets close. Eventually, it starts to grow darker. Names are exchanged in broken, slow Spanish. ”Dia,” the boys called the blonde woman. It’s not exactly right, but it’s close enough.

Finally, covered in dirt and drenched in sweat, the blonde woman heads into her hostel and goes up to her room. From her room, she hears shouts from the street below, “Dia! Dia!”

She goes to the window – but all they wanted was to see her again. She waves to them, and they wave back. And they look at each other and they laugh and they smile.