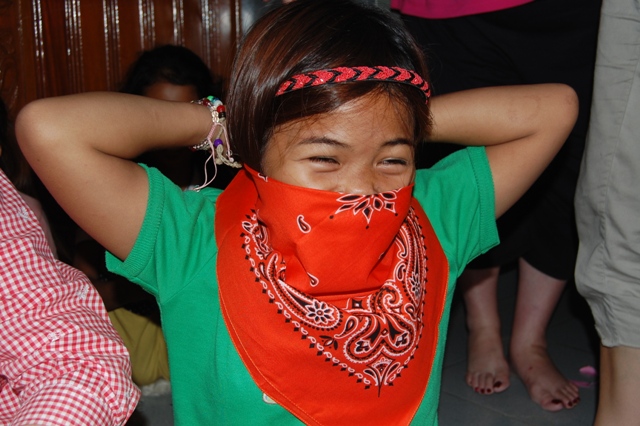 I choked on my chicken curry when Boupha told me she was 12.

Unlike Western countries where average twelve year olds may look sixteen, the reverse was the norm in Cambodia. Despite their youthful appearance, these girls had been forced to grow up quickly living through inhumane conditions within brothels and experiencing situations children are not supposed to witness. Traveling as a volunteer photojournalist with an anti-sex trafficking team to Cambodia, nothing could emotionally prepare me for my most challenging trip to date.

The better part of the morning had been spent with 21 girls, ranging from five to 16 years old,

at a secure assessment center, singing, dancing and creating art and crafts. Over a simple yet hearty lunch of white rice and yellow chicken curry, we were getting to know them personally.

Earlier that morning on a hot, humid November day, I rode in a tuk-tuk with a program officer

towards our destination — the assessment center. A spirited Filipino man, a couple years younger than me, explained its operations in a tone heavily laden

with optimism. The high security abode acts as a refuge for girls who had been raped, kidnapped or sold as sex slaves and prostitutes. They reside here until their initial legal battles are over. Subsequently, they are either transferred to a shelter or returned back home if their families are deemed safe enough to protect them. The center provides short term care such as medical checkups, mental evaluations and family assessments for the first two months 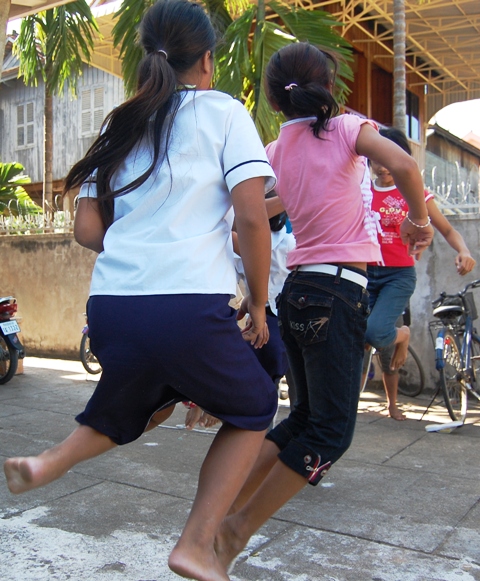 of rescue before transfers to other more permanent shelters. We were fortunate to get behind those secured gates.

There are roughly 14 million residents in Cambodia, of which ethnic Vietnamese comprise 8%

of the total population. Half of the girls rescued annually are of Vietnamese decent. We’d planned to spend time with them decorating rubber flip-flops with colorful beads, feathers, sparkling press-on jewels, ribbons and stickers. Screams and shrieks of excitement at the sight of our flip flop project quickly reminded us of their innocent youth. The scene before us was one of little girls just grabbing at pink, purple and pastel flip-flop accessories. The rest of that humid afternoon was spent decorating flip-flops with colorful ribbons and jewels as well as making bracelets and painting faces. Even though it seemed a mundane project, it allowed them to be kids once again.

As theday wore on, one of the girls who was mute became more energetic, breaking out of her

shell. I wondered if she’d been born that way which eventually led to her being sent to a brothel, or if she’d been so severely traumatized that not talking was a defense mechanism — a way to cope with her ordeal.

As they played, I observed these girls. Deep dark eyes. Strong jawlines. Flawless skin. Some of the most gorgeous children you could ever 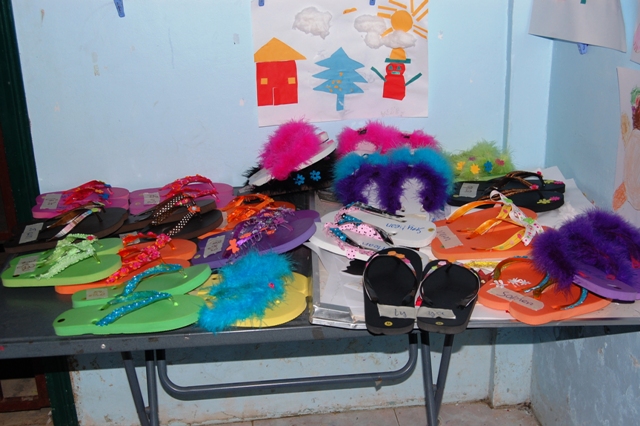 meet, and I constantly had to remind myself of what they had been through within those brothels.

Later in the week, I visited one of the more permanent shelters in the province of Kampong Cham, which is close to the border of Vietnam. Thousands of girls [estimates say 800,000] are trafficked from Vietnam through this province every single year. Trudging through narrow backroads and riding along the Mekong River, we finally reach our destination a couple hours later. Beautiful, traditional singing welcomes us. The difference in the girls’ dispositions at the shelter in Kampong Cham and those at the assessment center was night and day. These girls were filled with sanguinity and had begun to adjust to the normalcy of life outside a brothel. They’d begun to learn vocational crafts as well as attend school once again. This time around, these girls were the first to extend hugs to us foreigners.

“It takes a certain type of person to be a private investigator,” expressed Sam, an undercover detective who has surveillance teams dispatched all over Southeast Asia.Â  Our team had met with him over lunch in Phnom Penh a few days later. “One has to go into brothels, act like a customer, and put themselves in awkward and morally challenging positions to rescue a girl.” With years of criminal investigation under his belt in his native Australia, the epidemic of human trafficking brought Sam to Southeast Asia. Organizations such as UNICEF, Save the Children, World Vision, Chab Dai, World Hope and the International Justice Mission (IJM) are just a few actively fighting the issue of trafficking. There are no shortages of NGO’s based in Phnom Penh that fan out into the most remote of regions within Cambodia to help educate villagers and fund community development projects as alternatives to selling their children for income.

As I watch Boupha scoff down large spoonfuls of yellowed rice, emitting a huge childish grin between mouthfuls, humility washes over me. In her mere six years, she has witnessed how low man can go but also how high he can rise back up. Reading about sex trafficking elicits feelings of unbelief and disgust, but staring into the dark eyes of a six year-old victim evokes feelings on an incomparable level.

*Names have been changed for their own protection.

Nigerian-born Lola Akinmade’s photography and travel writing are characterized by vibrancy and hope. Her work has appeared on National Geographic Traveler’s Intelligent Travel. She has written articles and contributed to Travel Channel’s World Hum, Sherman’s Travel, GoNOMAD, The Away Network, Transitions Abroad, The Matador Network, among others.Â  She also worked as a field journalist on the web team during Eco-Challenge’s Expedition Race in Fiji.

When not building enterpise GIS applications for a living, she volunteers as a photojournalist with both World Hope International, documenting their projects in countries such as Nicaragua and Cambodia and C.H.I.E.F – an NGO based in Nigeria that promotes grassroots health development, HIV/AIDS awareness, and the empowerment of women.

She is the editor for Matador Goods.