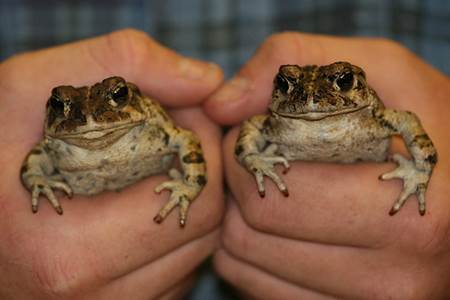 “This is something you have to see,” John, our guide, told us on the way back to Chiang Mai from Lampang. The driver stopped the transit van and John jumped down out from the van and onto the roadside verge. He waved at our group to follow him.

We entered a warm, muted underworld of stalls on the roadside. The dark coverings of tarpaulin gave the market a cave-like feel. Recycled farmers’ straw hats serving as lampshades dangled from wooden beams, one side of the rim cut out to let the light out. Flies crawled around the dusty bulbs and over the newspaper edging the straw hats, eying the food below.

Our eyes adjusted to the dimness and took in the food displays at the entrance. Displays of colorful chilies, patterned and textured mushrooms, and plates of watercress dotted with cherry tomatoes appealed to the eye and stomach. Fresh lemongrass, limes and lemons scented the air.

As we made our way toward the belly of the market, however, it felt for us Westerners as if we’d entered some kind of freak food show. But for the Thais, the market was filled with the freshest, most nutritious, flavorful and textured food, rich in protein and vitamins. We passed by heaps of cockroaches, grasshoppers, locusts and silkworm larva, great wheels of honey comb and wasp nests peppered with grubs.

Thai women sat in aprons, preparing food or tucking into bowls of soup. They smiled politely as the foreigners slowly filed past their displays as if viewing artifacts in a museum. 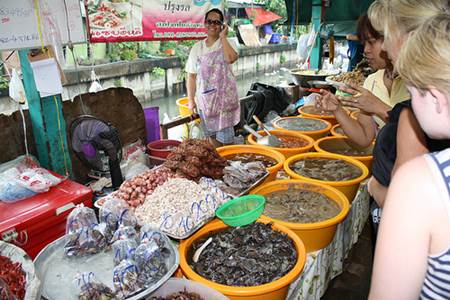 But it was the clear cellophane bags of toads that made us linger. They lay there in the bags, lifeless, piled on top of each other like an amphibian mass grave. As I stared at the toads, one of them suddenly moved. Holy moly. It looked at me accusingly with its bulging eye, ugly as sin, all protruding forehead and gritty, lumpy skin, its mouth turned down like a curmudgeonly old man. It was then I saw each bag had two straws poking through the top: All the toads were alive.

“My father used to catch toads in the paddy fields,” John grinned. “Sometimes I catch small ones and keep them in tanks until they are big enough to eat. They’re good in soups and stews.”

Thirteen-year-old Finn took John aside. They stood there deep in discussion until Finn finally handed over some baht in exchange for a bag of toads. I was intrigued as Finn was more of a burger and chips boy than a connoisseur of Thai cuisine. 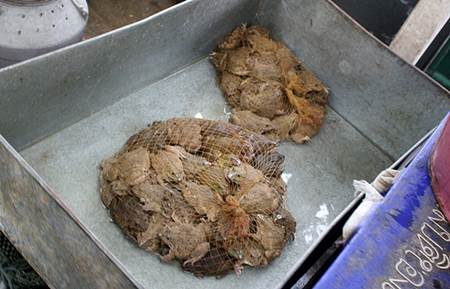 Leaving the market, we continued on our journey. But not much farther on, John stopped the van again and disappeared into a roadside field with Finn and his toads. The rest of us followed curiously. What had John and Finn planned? An impromptu toad barbecue? Now that would be something.

Finn walked to the edge of the paddy field. “Make a wish,” John said to him. Finn nodded soberly, opened his bag and … gently shook the toads out onto the grass.

At first the toads stayed clumped together, unmoving. Then, realizing they were free, crawled off one by one toward the wetlands. As they disappeared into the water, we took in the hills and trees mirrored perfectly between the fresh padi shoots.

At last John broke the silence. “Good karma,” he said with approval. Finn smiled, satisfied that his job was done: He’d saved the toads.