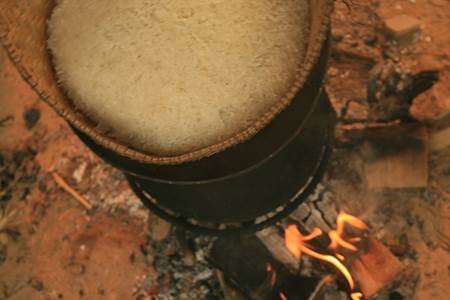 “There’s no way I’m getting up at 5:00 a.m., monks or no monks. I’m on holiday.” My husband, Martin, shook his head emphatically as he lay sprawled across the bed in the afternoon heat of Luang Prabang. I’d just suggested we rise early the next day to witness the traditional ceremony of giving alms to the monks, which begins at dawn.

A staunchly Buddhist country, the ceremony is practiced all over Laos. Alms giving earns the giver merit, or bun, towards their next life. The alms take the form of food, and the food that the monks are given each morning has to last them through the day.

Of course Martin capitulated and up bright and early, we hurried along in the direction indicated by the concierge as we dashed from the hotel. It was difficult to know where to position ourselves to best see the procession and we tried two or three spots before standing outside a faded French colonial villa. The streets, full of these remnants of Laos’s colonial past, give Luang Prubang its charm as well as its UNESCO world heritage status.

We’d been waiting about ten minutes when we heard a noise behind us and had to move quickly as the shutters of the house opened and a wizened Laotian woman looked out, not at us, although we’d been talking loudly, possibly she was just looking at the new day. The shutters snapped closed again and we could hear scuffling and banging inside. 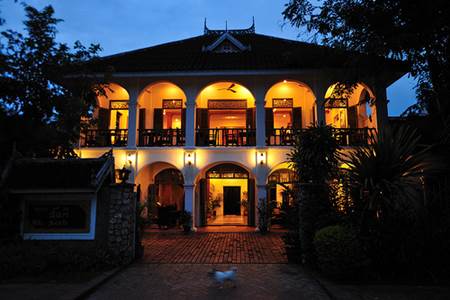 We continued to wait, peering up and down the street and noticed a group of tourists on the other side who had brought their own food to give to the monks, something we agreed we’d feel very silly doing. A few moments later, the front door creaked open and the old lady emerged. She was short and very stooped, her sparse grey hair scraped into a bun and with a mouth containing very few teeth. One scrawny arm clutched a blue-plastic stool and the other a basket of sticky rice. We made as if to greet her with sa-ba-dee, or perhaps bonjour given her age, but she took no notice of us despite the fact we were within inches of her. As she passed by me, she seemed so small and vulnerable that, like a mother hen, I felt as if I could tuck her under my wing. Slowly but determinedly, she shuffled across the road on bare, leathery feet. Placing her stool on the ground at the foot of a flight of steps leading up to the temple she carefully sat down, basket of rice in her lap. A few moments later she was joined by another, equally ancient, lady who sat some distance from her. With no acknowledgement by either they sat there, in complete silence, waiting for the monks’ arrival.

Silently the first group of monks approached as we watched and whispered in anticipation. Bare foot and with shaven heads, they were dressed in bright orange robes, some tied with yellow sashes. Slowly walking along, they made a colorful and dignified line. As they progressed along the street, they stopped in front of each of the faithful and offered their metal bowl for food. When they came to our old lady her blue stool was so low they had to bend deeply. As each monk passed, her gnarled hands pressed together a small portion of the sticky rice before placing it in their bowl, slowly and methodically, without raising her eyes to theirs. Most of the monks were in their teens or twenties but some were younger. A much older monk stood out in the otherwise youthful line. He was not as stooped as she, but for him she lifted her hand up to the bowl so he would not have to bend.

Although rhythmic her movement was reverential not mechanical, and I wondered how many years she had been getting up early, preparing her sticky rice and crossing the street to hand it out to the long procession of monks. 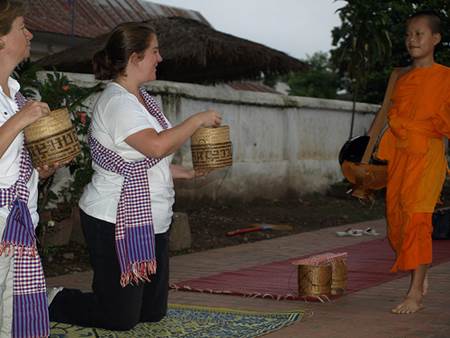 “She looks about 90,” whispered Martin, looking over at her. She might have been but I doubted it. Hers would have been a hard life. She would have been born when Laos was part of Indo-China and under French control. French as well as Lao would have been the languages of her childhood, baguettes and patisseries for sale alongside sticky rice and lemon grass. French civil servants would have lived in the house she now occupied and, if she did attend school, her education would have been in French. For a few years following the French departure in 1953, life would have been relatively peaceful, but one can only imagine what horrors she must have seen during the long and bitter civil war before the Communists took over in 1975. Luang Prabang was the home of the Laotian monarchy and, before they were murdered by the Communists in 1975, the old lady would have followed their comings and goings with interest.

Our old lady would have seen a lot of conflict. At times she must have been worried, hungry and frightened. Coming from a stable country far from any upheaval, I found it hard to image what it must be like to live like that. Small wonder that she wanted to earn bun to improve her lot in the next life.

Her faith must have helped sustain her through all the years of violence and change, and the ritual of the alms giving each day no doubt provided a comforting backdrop for her as she moved through childhood, girlhood, marriage, children and widowhood. 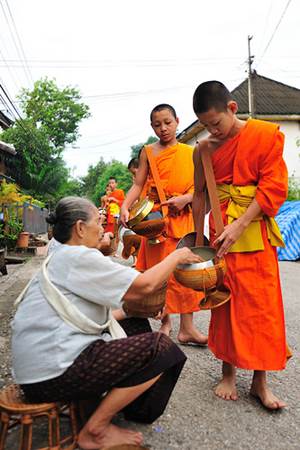 I thought about the inevitable. The day when the monks moved along her street at dawn, but she was no longer there to put sticky rice in their bowls. What they would think, would they even notice, and would she have earned enough bun to come back to a better life than the one she’d left?

Did she really believe or was it just habit, a daily ritual? I didn’t think so and I hoped not. I thought about how comforting it would be to have a belief so strong.

The line of monks ebbed and flowed. It seemed they were coming from different monasteries as sometimes there would be a significant gap between groups. When not dispensing food, the old lady sat there completely still and almost seemed to be nodding off to sleep. However, as the next group approached her, she would be immediately alert and once again forming the grains of rice into a ball for each bowl. She seemed to know when the final group had been and as we saw her pick up her stool and begin her slow progress back across the road to her house, we realized the ceremony was over and we headed back to the hotel in the growing heat.

“Well getting up that early wasn’t as bad as I thought,” commented Martin, “and we’re in good time for breakfast.”