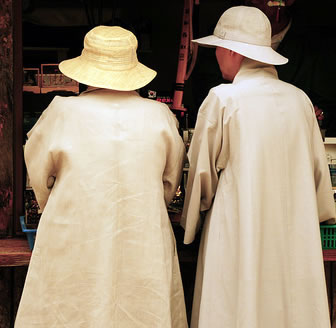 I’m almost asleep – a real accomplishment, what with the tube jabbed through my rib cage and piercing my right lung – when I hear them push my door open. I was awake last time they came too, enjoying my kimchi and boiled eggs.

Surely, I think, this time they’ll take one look at me sleeping so peacefully and leave. I keep my eyes closed. A few seconds later, I feel a light tapping on my arm and sigh.

Two smiling women, dressed in matching jackets and carrying pamphlets, greet me with a soft “Anyang haseyo.” I smile back, but arch my eyebrows in what I hope is an expression of polite confusion. Like in my five months in Korea I never bothered to learn how to say hello.

Undaunted, one steps forward and starts her spiel. She’s very kind, as kind as one can expect from someone who wakes a sick patient in order to save her soul from Satan. I keep my eyes wide, moving between one to the other in a desperate attempt to convey that I don’t understand, but she powers through.

On my first weekend in Suwon, my husband and I walked down to the city’s main subway station/luxury mall. Just outside of the entrance, a group of seven men and women wearing those matching jackets sang along with a synthesized backing track, pausing between each verse for one to preach. A small group had gathered around to listen. Never one to miss an opportunity to practice learning a new language, Josh squinted at the Hangul on the back of their uniforms.

We continued on our quest for espresso, the first of many weekend walks to this part of the city. The recruiters were always there, singing and handing out pamphlets to passersby.

“I didn’t realize there were so many Christians in Korea,” I admitted once. “I didn’t expect to see such a… presence.”

“Percentage wise, probably not,” he replied. “But they’re persistent.”

When the smiling woman moves closer to my hospital bed, she bumps my catheter. I wince, and she steps back with a quick apology, continuing her speech from a safe distance. My mind wanders to my plans for the evening, which happens to be New 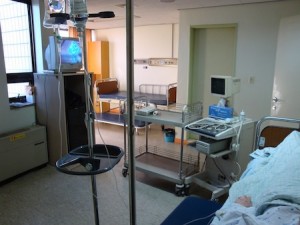 Years Eve. Josh and I had talked about going into Seoul, maybe Hongdae, our favorite neighborhood, to see some fireworks. Not being the kind of people to let a little collapsed lung stop us from having a good time, we now planned on dragging my IV rack and the canister of yellow goo connected to my catheter over to the window in the hallway to see if Suwon put on a fireworks show too.

My doctor walks in just as the woman hands me a pamphlet, and I say a silent thanks to any and every deity that may or may not exist.

A cheerful, but respectfully soft, conversation starts up by the door. Eyeing the handful of pamphlets the women have left to distribute, I imagine the rest of the visits they will pay on my floor. I peeked in the other rooms on my last trip to get an X-ray – I’m the youngest patient here by several decades. I’m also the only one in a private room, quarantine being perhaps the only benefit of tuberculosis. The other rooms have six occupied beds each, one bathroom, and a television constantly running Korean soap operas.

Dr. Ahn is without a doubt the best doctor I have ever had. She’s a Christian too, which I learned when I first checked in to the hospital and she came back with the results of my CT scan.

Josh and I exchanged panicked looks. Agnostic, atheist – personally, I don’t know what to call myself, but a doctor resorting to prayer is mildly terrifying in any case. We both hoped it was some sort of translation mix-up.

During my stay in the hospital and in the following months of appointments with Dr. Ahn, I learned a lot about her beliefs, stories about her brother and how her prayers for him were once answered. She works exhausting hours and smiles through all of them. 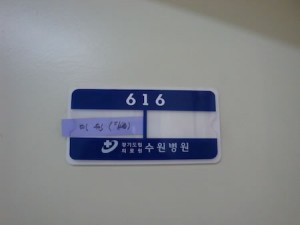 She greets every patient as if they were a relative. I’m positive she prays for each of them too, and often thought that between consultations with others, writing prescriptions for others and praying for others she must have absolutely no time for even a single thought that’s all her own.

But I think she’s okay with that, because when she talked about God and her faith, her eyes would close and her hand would move to her heart and she looked like she needed nothing else in the world.

As she opens the door wider, her subtle way of respectfully encouraging the women to leave my room, I leaf through the pamphlet. It’s a comic strip, all in Hangul, but it doesn’t matter — my eyes move through the first few pictures, and I get it. A baby laughing, a child playing, a teenager studying math. On the next page he’s receiving a diploma, shaking hands with his boss, standing at the altar… and on the page after that he’s holding his own baby, watching his children grow, then his grandchildren.

Then he’s old, lying on a hospital bed like mine, a peaceful expression on his face and a question mark hovering over his head.

On the next page he’s burning in hell.

A picture of an open-armed Jesus is accompanied by a long, solid block of Hangul – and the story begins again. Only this time, the baby is baptized, the child is praying, the teenager is studying the Bible. And so on. I don’t need to see how it ends. I set the 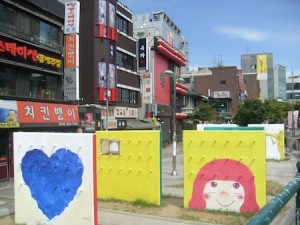 pamphlet on the table connected to my IV bag rack, making a mental note to show Josh when he gets off work. We could both use the laugh.

Dr. Ahn approaches my bed with a clipboard and a smile. She asks about how I feel, my bathroom habits, the color of my phlegm. She is encouraged by my progress, but wants me to consult with a surgeon once the catheter is removed from my lung.

It’s the second time she’s mentioned surgery. I’d half-convinced myself the first time was another mistranslation. They use the word surgery for doctor’s office in England. Like boot versus trunk. Lift versus elevator. She just wants me to consult another doctor in a different office. I refused to think otherwise, even when she asked us where our apartment was and not our flat.

But now she says surgeon, and there’s no more pretending. I allow this to piss me off, because anger feels better than fear.

She puts out her hand. “I pray for you,” she says once again, so I take her hand and close my eyes.

Michelle is a musician, writer, and teacher just trying to see the world while doing what she loves for a living. She’s taught ESL in Salvador, Brazil and kindergarten in Suwon, Korea, and now she’s a full-time freelance writer living in Seattle (just to keep the city alliteration going). She’ll try pretty much any food once and believes coffee is its own food group.