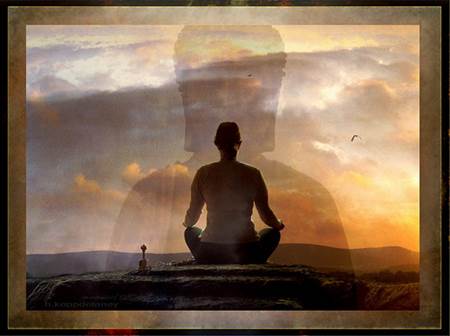 The monk and I sat facing each other, crossed-legged and mouths agape. We sat in the side room of a wooden shrine in the green mountains of northern Japan. Orange cloth wrapped his body and he wore a conical orange cap. He was dead, and I couldn’t take my eyes off him. As I stared at his hollow eye sockets and dry, brown bones, my heart began to thud. I was alive.

Molly and Sarah sat on either side of me, barefoot on the straw mat and wide-eyed, too. It was one thing to read about the Sokushinbutsu. These Buddhist monks of northern Japan went through an intricate three-year starvation diet of nuts, seeds, tree bark, and arsenic-laced water to mummify themselves (no embalming necessary) and reach the status of Living Buddha. It was another thing entirely to sit facing one of the twenty-some monks who had succeeded. I wanted to ask him questions. And because he was sitting up, it seemed like I could. Did it hurt? Are you glad you did it? If you came back to life, would you live this way again?

Beyond the open-air shrine squatted rice fields, their plants in perfect rows. The stalks had grown grasshopper green in the mid-July heat. Jade mountains surrounded the rice fields and blue sky framed white clouds. Early that morning, we had driven from our town four hours south on winding highway and narrow roads to hike Dewa Sanzan, a trio of mountains holy to the Shinto religion: Mt. Haguro, Mt. Gassan, and Mt. Yudono. Mountains of Birth, Death, and Rebirth.

I was searching myself for my losses and gains. I had been teaching English in rural northwest Japan for the past two years. I was now down to the final week of my time in Japan, and my heart brimmed with questions. Why had the past few years given me the best experiences of my life, but also the worst? Why was I leaving the country with a broken heart? And what, I wondered, would I carry with me? 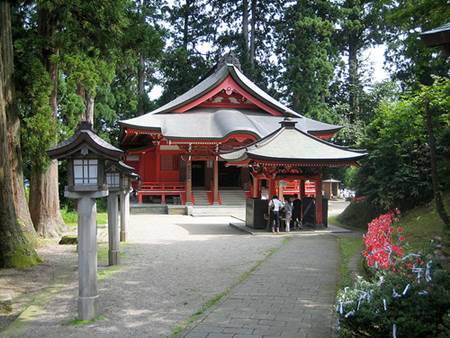 After our visit to the shrine, we drove to the base of Mt. Haguro, Mountain of Birth, and began our hike of the three peaks. Halfway up the 2,466 stone steps to the top of Mt. Haguro, we paused at a hut for bowls of frothy, bitter matcha tea and sticky, sweet mounds of red bean-covered mochi. While we rested, we watched men clad in white robes walk by on their pilgrimage to the holy peaks. Thick mist wrapped ancient cedar trees. My mind wandered the landscape of my years in Japan, sifted through the memories, and snagged on the two experiences I hadn’t foreseen, but that had changed everything: the earthquake and the boyfriend.

The great Japan earthquake had struck Tohoku, the region I was living in, eight months after I’d moved to Japan. As we climbed the stone steps of Mt. Haguro, I reached back in my mind to one year and four months before, to 2:46 p.m. on March 11, 2011.

Snow fell as the school began to sway. Binders and notebooks fell to the floor. The old, two-story building leaned left and right, shook and trembled, stilled to a rumble, then swayed again. I crawled under my metal desk in the staff room and sat knees-to-chin while the world unhinged. The earth shifted, a black wave rolled towards the east coast, and the sky fell in crystalline flakes.

Two months later, a group of my friends and I drove to the section of the Pacific coast worst hit by the tsunami. Along the coast, the sparkling blue water lapped against the debris-splintered land. The ocean was so beautiful–so calm and composed–so wrong.

We delivered boxes of food to schools converted to shelters. Inside one school, rows of blue plastic lined the gymnasium floor. Family photo albums spread across the blue. Each album lay open to dry and be identified. I stood at the gym’s entrance, my feet rooted. 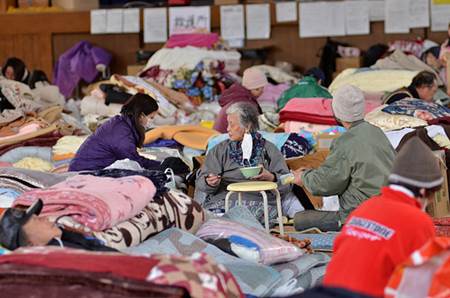 From my post, I saw women in white wedding dresses and men in suits smiling from plastic pages. My eyes traveled the row upon row of people’s unclaimed memories. As I stood in place, I ached for those things we sometimes forget are not permanent: homes, family photo albums, lives. What gets taken from us, and what remains? What are we to make of our suffering? Where and when does rebuilding a life begin?

A move to Japan had initially seemed like a low-risk adventure to me, but the earthquake and tsunami made my life choice take on a note of seriousness. I had meant for my two years in Japan to be fun and adventurous; I hadn’t come to ponder the hard questions. But natural disasters don’t stop for human desires, and there I was, standing in a school gymnasium in northeast Japan, contemplating life.

That afternoon of my last week in Japan–a year and four months after the earthquake–I found myself sitting at a hut halfway up a mountain, drinking tea and still processing the earthquake and tsunami. 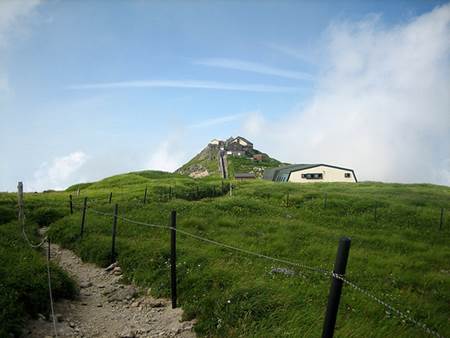 After tea, we finished hiking the first holy peak and drove to Mt. Gassan–the second peak–Mountain of Death. As we gained elevation on the road to Gassan’s eighth station, the distant mountaintops became dark, rounded islands in a sea of cloud. We arrived at Gassan’s eighth station late, and staked the tent using the car’s headlights.

Inside the tent, we drank cans of Kirin beer and made shadow stories against the tent walls with the one flashlight Molly had remembered to bring. Our stories soon turned to ones of our love lives. I thought of Ryan and of our failed relationship.

Soon after the big earthquake, my world had turned upside down again. As spring crept into northern Japan, I fell for a green-eyed boy who lived in the town north of mine. Ryan lived fast and had fun, and I’d liked him from the first day we met the summer before. Over the months, we became friends.

In late March, a few weeks after the earthquake, the water pipes in Ryan’s house froze. He drove down to my apartment to use the shower, and stayed the night. The next day, Ryan still had no hot water at home. The pipes in his house seemed to stay frozen the entire month, and by the end of April we had intertwined our lives. I was pretty sure Ryan wasn’t right for me, but he was thrilling and we were both lonely.

The fun, uncomplicated days together didn’t last long. After a few months, Ryan started drifting away. I slowly realized he was one of my priorities, and I his convenience. We were both occasionally generous, and mostly stingy in the love we gave.

One night, I was crying in bed. Crying at night was something I’d started to do that summer. Ryan sat up, leaned over me, and at first I thought he said, “I love you with all my heart.” It took me a few seconds to register his words. What he’d actually said was, “I love you, but you make it hard.”

We waded through the messy relationship we’d made through the fall and deep into winter. Then, one early morning in February, our ending began. I lay in the bed sheets, dread filling my body. Ryan looked at my face, got out of bed, and walked to the kitchen. Later, I agonized over defining what he’d done to me. Soon, he walked back into the bedroom holding two plates of blueberry pancakes. He never made pancakes. He handed me a plate. I held it, warm and heavy on my lap. I stared at the blueberries nestled in the pancake; they looked like small dark bruises on skin. Empty, I picked up my fork and ate.

After we broke up, I waited. I waited for spring, for the tight fuchsia buds on the cherry trees to bloom pale pink.

At the end of my time in Japan, the questions still clouded my mind. Did the relationship mean anything? Why did I take so long to leave? Could I feel whole again?

In the wee hours at the eighth station of Mt. Gassan, rain slashed our nylon tent. Thunder rumbled. “One one-thousand, two one-thousand,” Sarah, Molly, and I started the count. If it stopped at three-one-thousand, we were abandoning ship and running for the car.

“Three-one-thousand…CRACK!” We unzipped the tent and ran. 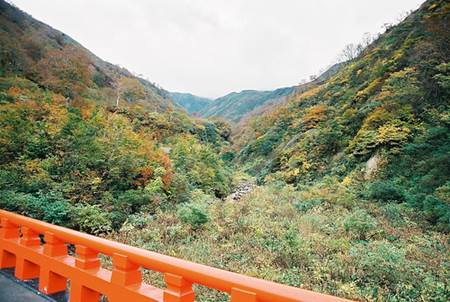 At 6:00 a.m., the rain still poured from the sky. We gave up on the hike and decided to drive straight for Yudono, the Mountain of Rebirth, holiest of the three peaks. Visitors aren’t allowed to take photos on top of Yudono, and they aren’t supposed to tell others what takes place there.

But I want you to know. We had to remove our boots and shoes, and rub a thin piece of paper over our bodies, then float the paper in a creek. A priest then blessed us and, barefoot, we walked up a brown rock slab while water from a hot spring cascaded down over our feet and around our ankles.

Over the top of the rock, and down the other side, people stood in line at a small clearing that overlooked the mountains. From my place in line, I watched what others did so I’d know what to do. One by one each person walked to the edge of the clearing, prayed, clapped twice, then turned and walked back up the rock.

When it was my turn, I walked to the edge. A year or maybe more out of practice with praying, I found myself instead, talking to Japan. I can’t remember everything I said as I faced the misty wild green mountains, but I can remember a feeling: surrender. The mountains had taken me in. Suddenly, I didn’t need to know the answers to all my questions. I didn’t need to know why, how, or what if. The questions were enough. Time would answer them. 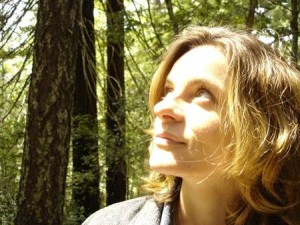 I gazed at the green mountains and wet sky, drawing air deep into my lungs, then exhaled. In embracing the unknown, I found astonishing freedom. I pulled air in a second and a third time. Just as the monk sitting in the shrine had reminded me, I was alive.

And so I began.

I clapped twice, turned, and walked back up and then down the rock slab, hot water and peace flowing around my feet.