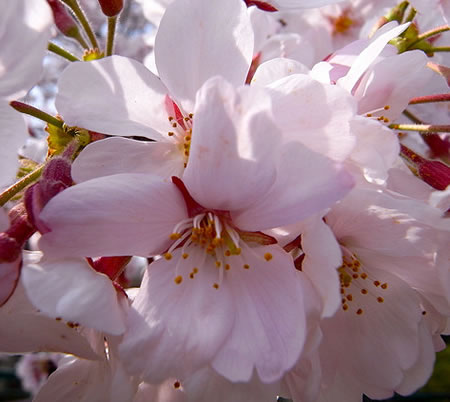 The first time I ever smoked a peach cigarette, I was wearing a dinosaur suit and sitting on my friend’s balcony in a Tokyo suburb. My friend had a dinosaur suit because he’d gone to a fancy dress party the week before, and I was wearing it because I was cold and it was made of fleece. I’d never been much of a smoker, but the vending machine sold dozens of different flavors and what was the point of traveling halfway around the world if I wasn’t going to try new things?

It was the end of my first day in Japan, and I felt overwhelmed with the strangeness of it all. Scotland has its fair share of oddities, but nothing compared to shops selling comedy wigs for babies and solar-powered money boxes. The air here felt heavy and hot — there is no such thing as humidity in Scotland, and I wasn’t used to feeling like I was breathing through a wet cloth. There was so much going on, and nothing was familiar. I’d never felt so far from home.

Through the door to the balcony I could see my friend at the other end of his tiny flat, bathed in the glow of his laptop screen, tracing kanji symbols onto his palm. He was in his final year of a degree in Japanese, and had to learn 150 kanji symbols a week.

I lit my cigarette, closed my eyes, and leaned my head back against the railing. Above me was the same night 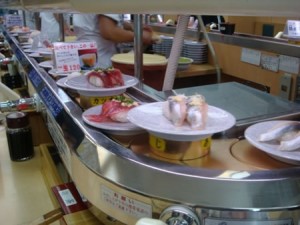 sky that I’d seen a thousand times at home. I breathed in the dusk air and listened to the flats around me relaxing into their evenings. Suburban families, the mutter of other people’s televisions, the evening sky: finally something was familiar. I felt calm for the first time since I’d got off the plane.

The second time I smoked a peach cigarette was two weeks later, on my final evening in Tokyo. My friend had gone out to a prison-themed bar, but as I was slightly hung over from the night before I’d decided to stay in his flat and finish packing.

I made the ten-minute walk to the conbini (convenience store) to get my dinner: iced coffee and triangles of sticky rice. It had rained earlier, and the air smelled clean and cold. I knew it was going to be the last time I walked down this street, and I tried to absorb everything: the curious smell from the always-closed shopfront, the name of which my friend could not translate — either fish or carpenter, he said; the American-themed bar selling pizza and terrifyingly expensive beer; the jingle of a bell as a cyclist tried to pass; the restaurants that are just a tiny kitchen and some stools out on the pavement; the shushed wails of a baby; the house so overgrown with ivy that you’d think it must be abandoned — except for the light glowing from an almost-hidden window.

I went left, then right, then right again, turning down dark suburban alleys between pools of streetlight. When I got to my friend’s flat, I realized that I hadn’t been paying attention to my route. After two weeks, I knew this place so well I didn’t even have to think. I stood outside his door, finishing my cigarette as I dug through my pockets for the spare key. 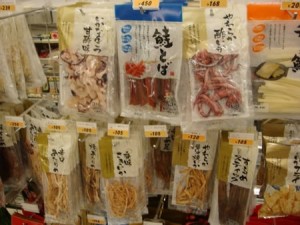 I’d spent a fortnight in a city where dogs wear hair-clips and get pushed around in prams; people wear surgical masks for their morning commute; you can eat lunch served by girls in maid uniforms while surrounded by dozens of cats; and everything — everything — can be bought from vending machines. Finally, on this walk between quiet houses, I started to make sense of it. Sure, some things were still pretty mystifying, but I was beginning to feel like I knew what I was doing. I could navigate the subway system and order food in restaurants. I knew how much chili oil to put in my ramen and which types of sushi were made of mysterious sea creatures. I had swallowed down huge chunks of this strange city, and now I was ready to go home.

The third time, my girlfriend was out at band practice and I had stayed at home to watch our hamster. Not that he really needs much looking after: a chunk of carrot and a run around in his plastic ball, and he’s happy. I spread myself out on the couch with a glass of wine and a book of short stories. As usually happens when I start reading, I wanted to write. I opened my laptop. Three sentences later, I didn’t want to write any more: the story had floundered, the flat was too hot, and I was jealous that from the enthusiasm of the hamster’s munching, that carrot was the most delicious food in the whole world.

I had forgotten I had any peach cigarettes. My girlfriend doesn’t like smoking, and the pack had stayed at 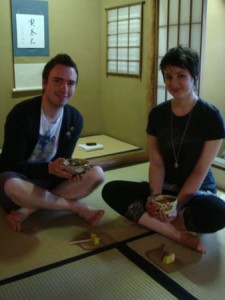 the bottom of my suitcase since my return from Tokyo three months prior. Something about my frustration made me remember them, and I dug the slightly crushed pack out of the suitcase jammed into the bottom of my wardrobe.

I took my wine glass and lighter out to the back of our building, to the paved area with the bin shed and washing line and a view of the rear windows of a dozen flats. Every window was lit up, so I smoked my slightly bent cigarette and watched the city go to bed. The air smelled of frying food and clean laundry, and it was warm enough that I hadn’t put shoes on but cold enough that the hairs on my arms felt rough. I could see a few burning blobs where other people had gone out for their own secret cigarettes. I liked the feeling of having a communal secret.

As I stubbed out my cigarette I thought: I had to travel all the way across the planet, but now I know how it feels to come home.

Kirsty Logan is a writer based in Glasgow, Scotland.Â She visited a few dozen countries before digging her heels into the city to concentrate on writing her novel. She dreams of visiting New Zealand, Egypt and Svalbard.