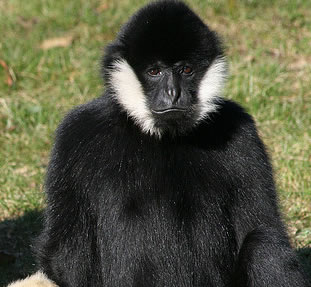 I try to curb my hope for seeing the endangered black gibbons of Bokeo Forest Reserve. But I do expect to eye a few birds or a snake. For an hour and a half, I duck strangler vines, bend bamboo, and sidestep fig roots. Our guide points to flattened grass and broken branches where elephants bedded. He gestures towards flutters in the dense canopy above. My companions and I woke at five for this Nature Hike in Northern Laos and that’s all we’ve seen: animals disappearing or the traces they left behind.

Back in our tree house, we watch giant squirrels weighted with two-foot long tails as they amble along broad limbs hunting ripe figs. Birds the dull green of older leaves land further away. I find a tattered bird book on a shelf, put on reading glasses and flip through the pages. Bulbuls. I lower my glasses and survey the birds again. I push the glasses back up and consider the illustrations. Flavescent Bulbuls? I can’t view the features well enough to be sure. I see a flock of shiny black birds with bellies and crests that are the renunciatory yellow of monk robes. I browse more pages. Sultan tits. I try to label flashes of orange and black but discover the relevant pages have been torn out. I spy an old pair of binoculars on the shelf. Only one lens focuses; I put them aside. By eleven, I’ve spotted a dozen different birds but identified only a few. Distant scanning alternating with close-up squinting forges a barbed pulse behind my eyes. I close them and lean back against the railing.

That’s when I begin to hear sounds that swell with the steady rise of the sun towards its zenith. I tune into trills and warbles clearer than Ella’s and percussive twitters, cackles and rasps that could bebop a Mickey Hart ensemble. It’s a fermented-fig-fueled jam to rival the musical synergy in an Irish pub. And I wonder: could this eclectic, musical perfection be enough? What if I measure the worth of a nature experience in sound rather than sight?

Through the rest of the day, I hone my listening skills. Bird calls fade in midday heat and 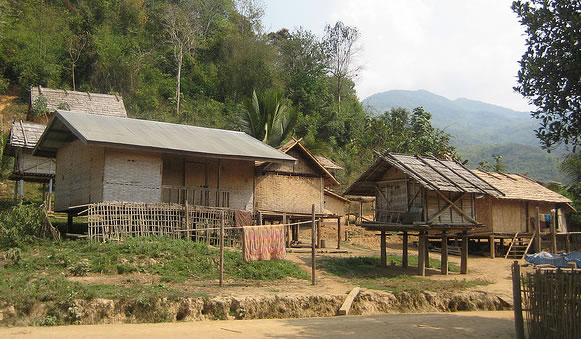 resume in late afternoon. The sun dips towards the horizon. Birds hush. A cicada-like hum rises to a crescendo that serenades us through our dinner of rice and vegetables and later lulls me to sleep.

I wake several times in early morning, first to hints of a frog chorus in a distant valley then later to a dry Arrff that must be a barking deer. I try to picture a deer’s grace contorted by such hacking but can’t. Just before dawn, I hear a soft hooting nearby followed by scattered replies. Owls?

With sunrise, giant tree squirrels chatter and birds begin warming up. Unguided this time, I set off with a friend for a final exploration of the forest. I avoid staring into the canopy or dense greenery along the trail and let sounds steer my experience. Wings whoosh out of the branches ahead of me. I visualize what I heard: large wings lifting a heavy body. A hornbill? 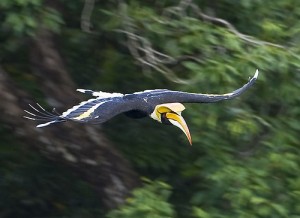 After several hours of hearing but not seeing animals, we near the tree house. We have to pack our bags and meet our guides for the hike and jeep ride back to Houay Xai. Giving into habit, I stop and scout the treetops. Nothing.Â  I’ve been spoiled by photogenic giraffes and lions in the open savanna of East Africa, antelope in high desert in eastern Oregon or whales in open seas. Animals here evolved to hide from predators and find one another through sound. Seeing them is not supposed to be easy. Still, I peek up one last time.

That’s when I hear it:Â  a single, slide-whistle call. I’m sure it came from the trees up ahead. I stare. No movement, but the sound repeats, the rise and fall of the glissando more drawn out this time. Right after, a response flutes from behind us. Within moments, hoots, whoops and shrieks surround us.

This is my chance. The sounds are close. I might be able to eye my prize, at least catch a glimpse of white-furred cheeks or lanky, black arms sashaying from branch to branch.

Instead, I close my eyes and listen.

Elizabeth Enslin received a 2009 Individual Artist Fellowship award from the Oregon Arts Commission. Â Her work appears inÂ TheÂ Gettysburg Review, Crab Orchard Review, Opium Magazine, Oregon Literary Review, Fringe Magazine, High Desert Journal, Raven Chronicles, The TruthÂ About the Fact,Â andÂ The Smoking Poet. Â She has traveled extensively in South and Southeast Asia, East Africa and the Western United States. Â She is currentlyÂ finishingÂ Sacred Threads,Â an ethnographic memoir on her experiences as anthropologist and mother in Nepal, and divides her time between a house in Portland and a yurt in northeastern Oregon. Learn more at:Â www.elizabethenslin.com