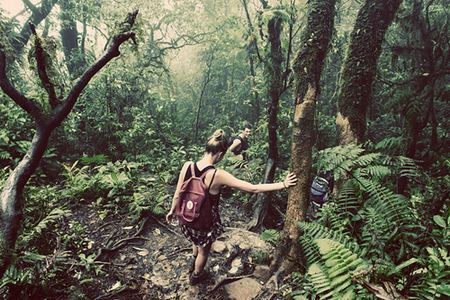 Tripping and sliding through the West Papuan jungle for five hours was not my idea of a good time. No matter how hard I tried to think of it as an idyllic adventure with me on some brave quest, I kept on being brought back to earth with a crash as I tripped over the next root. Somehow, when you are actually in the jungle getting attacked by killer bees and slapped in the face with branches, the experience does not seem nearly as exciting as when you see it on Discovery Channel from the comfort of a La-Z-Boy.

So why was I there, toiling through the muck? A good question. I tried to think of a good answer as I waded waist deep through my seventh mud pit then balanced precariously over some twigs pretending to be a bridge. Oh yes, I was on a group trip, there to “help” villagers with water tanks and kids clubs, as well as provide some entertainment as the villagers watched the feeble foreigners attempt to be of any use. This “helping” also involved, for some obscure reason, struggling through dense jungle to get to…wait for it…more jungle!

Far ahead of me on this expedition were the die-hard extremists of our group: people who actually think being sweaty, dirty and exhausted is fun and something that should be done regularly. They strode forward, their muscles and breathing moving in perfect rhythm, the picture of athletic excellence. 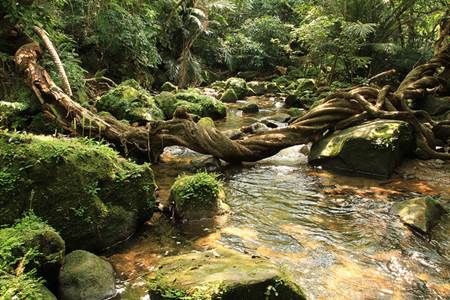 “Isn’t this great! Almost no one gets to experience this!” they encouraged.

Exactly. There is a reason almost no one does. Not everyone likes to die in the middle of a remote swamp.

Next in line were the people who were not totally happy to be in a swamp, but walked cheerfully enough anyway. You know the type: those who don’t really like anchovies on the pizza but eat them just to keep the anchovy-eaters happy.

Finally, there were the few leftover lag-behinds. I was in this group. Actually, I pretended that I was in this group. Really I was behind all of them as well. We slogged on in a daze. I discovered I could zone out for periods of time and, while my feet moved on, my mind would shut off and rest in my happy place (which involved clean clothes and an absence of mud). Then I would slip and fall, my happy place would crumble, and I would get more mud on my pants.

I was in one of these zoned-out periods when a small hand touched my arm. I didn’t notice it at first. Then I walked into a tree. After my head had cleared and my vision was not so blurred, I noticed the girl standing next to me. The girl brushed off my clothes and looked me over critically. Despite being older and taller, I suddenly felt nervous and very conscious of my filthy state. It was like being examined for faults by a grandmother embodied in a child. I covered my discomfort by starting forward to show that I was capable of clambering around in the bush. 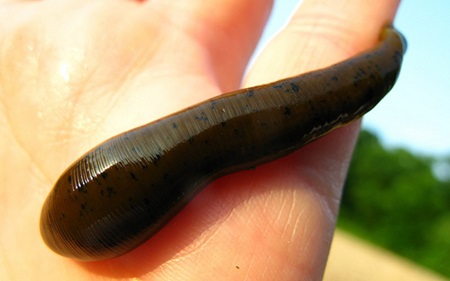 I fell flat on my face by my third step. The girl helped me up again. This time she did not bother brushing off my clothes. They were a lost cause. Businesslike, she gave my backpack to a willing village man who was accompanying us and took charge of my water bottle herself. I was clearly not responsible enough to be permitted to carry it. I embraced this character flaw in myself.

The trek resumed. My new friend watched over me, anxious, bending back branches and pointing out roots in an attempt to save me from future tumbles. Unfortunately, my clumsiness was incurable; she resigned herself to having to pick me up every few seconds. We soon settled into an awkward rhythm.

Then, just as I began to get the hang of walking, we came to a river. This was no ordinary gentle, sparkling river of peace. No, this was a malicious, brown, full-of-unidentifiable-objects river of DOOM! At least that’s the way it appeared to me as I tried to break my record for the number of leeches on my ankles (seven at last count). The water was thick and sucked at my toes as I tested it. 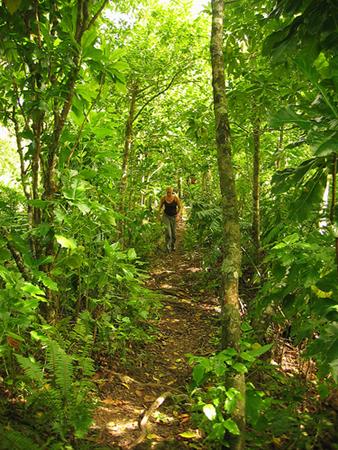 The man leading us enthusiastically gestured that we were to cross this river using a maze of logs and branches that had lodged together to form a natural dam. This “dam” would have never passed any safety regulations, I’m sure.

I was suddenly in a very safety-conscious mood. I stepped onto the nearest log. It wobbled. My friend grabbed my hand and pulled me over to the next wobbly log. I slipped and went knee-deep into the stagnant soup lurking beneath our “bridge.” I broke my previous record of seven leeches on my ankles – that now seemed like an insignificant number.

After much prodding and heaving on the girl’s part, and a lot of nervous shaking and shrieks on mine, we made it to the other side. Semi-solid mud never looked so good.

We settled back into our previous rhythm. I decided I should know at least the name of the person who was dragging me through the jungle.

This piece of information seemed meaningless to her; whatever my name was didn’t change the fact that I was about to get swiped with a branch covered with thorns. Twenty-three painful extractions later, I came to the conclusion that it was safer just to shut up and walk.

My new sandals decided to leave this life two hours before we reached our final destination. Under protest, I laid them to rest in a patch of bamboo. After two minutes of hobbling in bare feet, I sat down in a pile of leaves and refused to move.

Hetero tilted her head, looked at me and pointed to her own bare feet. Who wanted thick heavy things strapped to your feet when you could have such freedom without them? I did. I was not going to move until I had shoes. 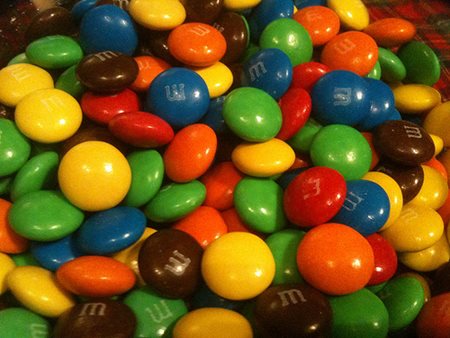 When I discovered that the leaves I had sat in housed a community of red ants, I changed my mind. By this time Hetero had disappeared. Just before I started to get desperate, she returned and handed me a pair of reef shoes, “borrowed” from one of the group leaders. Dang, there went my excuse. Did this girl have no limits?

Finally, we reached the end of our trek. The ground became firmer. The trees thinned out. Small huts appeared. I was so busy concentrating on making my feet move that I would have kept on walking right through to who-knows-where, if not for Hetero.

Gently, she sat me down and handed me my water bottle. She then proceeded to pluck out the millions of tiny grass seeds that had attached themselves to my shorts over the course of the day. I got out some trail mix to revive myself. I had made it. Of course, if Hetero hadn’t happened upon me in my pathetic state, I would have probably been still floundering in the jungle.

“Want some?” I offered her some trail mix.

She took a handful, ate all the M&Ms and left the rest. Inspired, I did the same. Chocolate has ways of bringing people together. The two of us, who had not known the other existed before that morning, relaxed in friendly silence. We had survived.

Bonnie is a traveller, perpetual student, writer, and chocaholic, who writes over at Wild Buttercup travel blog. She can also be found on twitter.