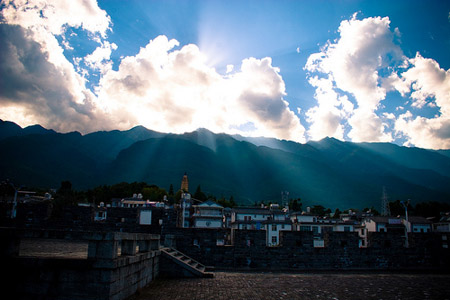 The bus rocked and swayed as we made our way through the rural Chinese countryside. Some passengers had managed to fall asleep, effectively ignoring our precarious position on the road and the loud Chinese movie drama being played in the front. I was preoccupied looking out the window. Despite having been living in Yunnan for the better part of two months, I was still taken by the cobalt blue skies and fluffy white clouds serving as backdrops to the terraced rice paddies below. The greens and yellows created a masterpiece of landscape that I was convinced could not be topped.

As we rode on, the bus roaring full speed ahead through the twists and turns of the mountains, I could only imagine what my next destination would bring. I imagined taking my first hot shower in weeks and looked forward to a mattress that would be more than a piece of plywood.

I had been living in Lincang, Yunnan, for four weeks, training to be an English teacher. I was heading to the infamously beautiful city called Dali with a group of friends. This was my first true travel excursion in China, and a much needed vacation.

We arrived at the bus depot two hours past our intended arrival time. This was neither surprising nor unexpected considering the delay of traffic on the mountain and the prolonged lunch break of our driver. I lugged my enormous suitcases off the bus, weathering the surprised and somewhat judging looks of the other passengers and passers-by. Considering I was moving my whole life to China for two years, I had to pat myself on the back for having only two suitcases. Rolling the bags to the curb, my travel companions stopped to look for a taxi. We were immediately assailed by numerous men and women yelling “Hello, taxi?” 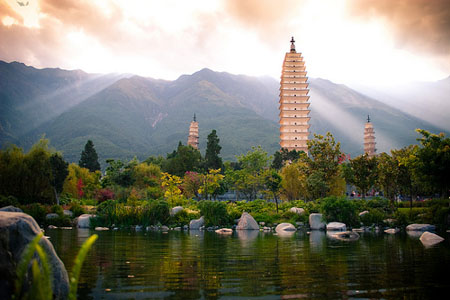 As foreigners, we were prime targets for cab rides offered at exorbitant prices. We were tired, dirty and hungry from the bus and knew that we wouldn’t be able to take our massive amounts of luggage on a local bus. Caving, we found a driver willing to take us to our hostel at a reasonable price and thus piled into the cab and began our journey.

The cab driver, exuberant at having gained our service, rattled off in Chinese asking who we were, where we were from, why we were here, were we married, how much money did we make – the usual. My friends, whose Chinese is infinitely better than my own, answered good naturedly whilst at the same time peering out the window to catch glimpses of the mountains in the background.

As the ride continued, the cab driver revealed a surprising and very exciting piece of information. “You are just in time!” he exclaimed. “The Bai people Torch Festival is tonight. It happens once a year and THIS year is the first time they are celebrating in town as well as in the villages. You are very lucky!”

Did he say torch festival? Did he say it only happens once a year? Astonished and excited at this news, we acknowledged how lucky we were and immediately began asking questions about the festival. We were subsequently told that the Torch Festival is a tradition that is celebrated by both the Bai and Yi people of the Dali Bai Autonomous Prefecture in Yunnan province. It is done to bless the people with both health and good harvest. A quick internet search revealed that on the evening of the festival, the countryside is decorated with banners for the celebration. Villagers place torches in front of the gates to their homes and then walk around their fields waving another torch in order to scare away pests. After dropping us off at our hostel and wishing us a good time, our energetic driver took off.

We walked into the hostel with renewed energy. The prospect of witnessing the festival was too much and even over-rode the excitement of taking a hot shower. We checked in and quickly got ready to partake in the festivities. I acknowledged the clean bathroom and hot water for only a moment, too much taken with the idea of seeing the festival, a “torch” festival no less! 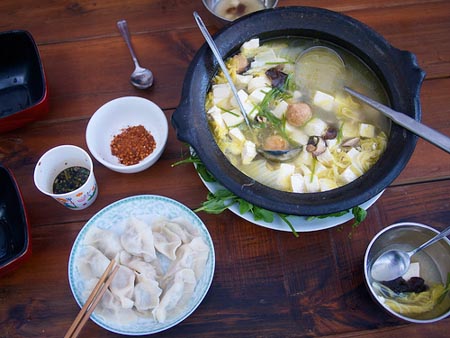 Walking downstairs, my friends and I joined the hostel staff and other guests for an ethnic meal. We ravenously filled our plates with a variety of dishes, noting between bites, that a large pyre had been erected just outside. The pyre that had apples and flags hanging off of the sides, all of which I assumed to be offerings and decor.

While eating, members of our hostel staff echoed what we had been told, that this was the first year the festival would take place inside the city as well as in the villages. Many of the hostel staff’s families had come up to celebrate with each other and the guests, making for a lively and authentic atmosphere.

At dusk, the pyre was lit and the various guests were given the opportunity to hold a torch in front of it and take pictures. Soon, a bag of what I can only assume was some sort of powder, was brought out. A ladder was stationed next to the pyre and a young staff member climbed up and began to throw the powder at the fire. This created a massive fire ball that rolled down the pyre leaving embers at the bottom in its wake. If interest had been half-hearted before, it was now fully engaged. 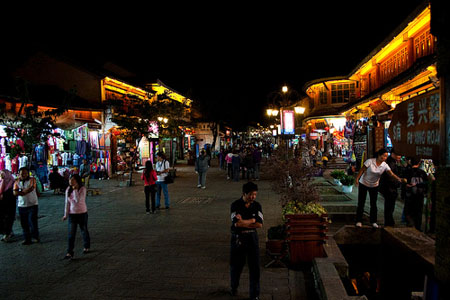 Tourists and locals alike gathered around and took turns throwing this powder on the flame. It became a sort of contest, who could elicit the largest fire ball?

As it became darker, people began to leave their homes and make their way to the city center. One thing we realized quickly was that another element of this “festival” involved people throwing the powder at the fire right around our feet – making it seem as though we, or our feet, would be set on fire.

As we walked down the driveway we noticed an old man carrying a small torch with the powder. He approached us with a smile, and then all of the sudden threw the powder down at our feet along with the flame. Shrieking, we all tried leaping away but not before being effectively terrified of the massive flame that had just reached our ankles. Laughing, the old man began to chase us.

I hid my feet behind a bush and watched in utter amazement as the locals began throwing fire at one another. I watched an old lady, not the least bit perturbed by this turn in events, let a younger man throw the fire at her feet. She laughed and, I assume, wished good health and harvest to the person who had just thrown a small fire flame at her. It was something to see. We watched with a mixture of horror and awe as people ran around throwing the dust through the flame at their friends and neighbors feet.

Tentatively making our way out the gate and to the old town, we watched as people ran past with small torches and fistfuls of powder. We passed small burning torches outside of local homes and store fronts. In the city, people carried torches and were engaging in the fire throwing we had just been introduced to. As we neared the central square, smoke filled the air as the crowd grew larger and larger. 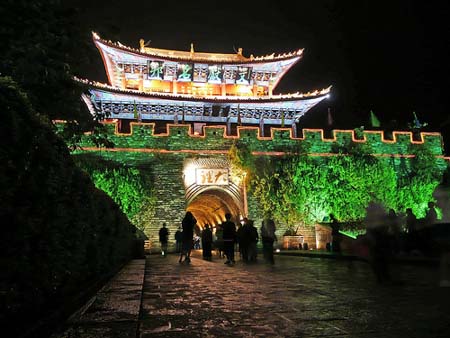 Peering over the heads of the other spectators my eyes widened in astonishment at what I was seeing. Several groups of people were in the center, creating massive fireballs with their torches and powder. Sections of the crowd expanded and contracted, depending on where the latest fire battle was taking place. A large and rather beautiful torch was brought out and immediately lit on fire. Soon after, powder was thrown at it in great heaps creating a massive explosion of light and fire.

I backed up to the nearest store and watched from as far away as I could. This festival seemed more like an excuse to play with fire than anything, but I had to admit, it was kind of cool. Locals and foreigners alike were throwing powder at the fire, creating flames so large I was worried something was going to catch on fire.

The crowd packed together, simultaneously trying to watch what has happening while also trying to maintain a distance. The heat of all of the fires could be felt everywhere and the smoke became thicker and thicker. I noticed my one friend had joined in the main square and had managed to get a group of people counting “One, two, three!” before they all threw their powder at his torch.

After deciding we needed to distance ourselves from this massive fire throwing, my friends and I walked down some of the smaller roads. Down the alleyways, we came across smaller torches lit outside of shops with families quietly eating a celebratory meal. The calmer atmosphere provided a contrast to the chaos that was ensuing just minutes away. Nonetheless, the smell of smoke and ash permeated throughout all of the places we walked. 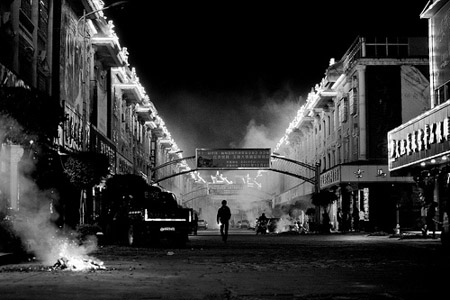 Just as quickly as the festival had escalated, it died down. My friends and I walked back to our hostel slowly. We watched as shop owners swept the ash away and embers slowly died from the torches. The main square still had a couple of small groups playing with the fire, but for the most part, people had scattered and moved on.

Covered with soot and amazed at what we had just witnessed, we turned to each other and laughed. This festival certainly was unexpected and we knew that we would be talking about it for days to come.

Arriving in my hostel, and reflecting on the evening’s activities, I couldn’t help but smile. If traveling in China has taught me one thing, it is to always expect the unexpected.