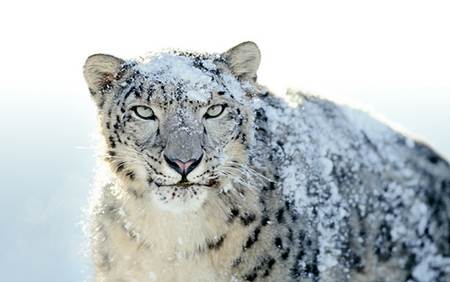 Though I stood in the heart of the northernmost snow leopard habitat range, I had little chance of encountering one. The snow leopard is no ordinary creature to study or protect. Theirs is a world wrapped in ancient political intrigue, swirling myths and the silent, icy bastions of the great Central Asian mountain ranges. Their habitat sprawls across twelve countries from Bhutan to Russia in some of the harshest terrain on earth. Snow leopards go by many names: sah, barfani chita, shan — here in the Altai Republic of Russia, they are irbis.

I had already been in the Altai, at the edge of a great swath of mountainous Mongolian borderland known as the Chickachova range, for several weeks and had found exactly one shallow snow leopard scrape in the loose shale of a valley. I’d ventured here for the same reason as most in our small group, following the inexplicable siren call of thin mountain air and the pale green eyes of a ghost cat. 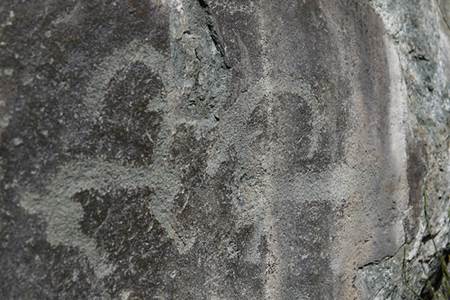 Our expedition was a snow leopard conservation project that hoped to scout for signs that all was well in the snow leopard’s realm. We’d found an ibex’s skull and curled horns lying in a stream and the nest of a golden eagle high in a tree. We’d stumbled on forgotten petroglyphs and ancient Scythian burial sites, abandoned by the world. A nomadic herdsman had offered us sour yak cheese out on the steppe and one night, a wolf’s howl had pierced the evening calm.

But no snow leopards had yet shown themselves. Rarely does anyone succeed in actually observing this ghost of the mountains; they seem able to melt into the very rocks and snow, leaving behind only vague outlines and whispers of their presence. To study the snow leopard is to chase their shadows to the tops of the snowcapped mountains. To know the snow leopard is to snatch glimpses of their spirit in the stamp of fleeing ibex hooves, the silent watchfulness of circling lammergeyers and the quiet independence of those who share their mountain world.

Days in the Altai passed in a shifting blur of long hikes and longer car rides. We were headed closer to the Russian border with Mongolia than we’d been before, several hours from the nearest town. It had been an especially long day of bumping and bouncing over faint dirt tracks through the mountain foothills in our small caravan of Landrovers. Anyone who succumbed to dozing didn’t stay asleep for long before the car threw them against the windows, so we kept each other awake discussing our different countries, travel stories and the genius of Victor Borge. When that failed, we resorted to stuffing an Abba greatest hits CD into the ancient radio. Ahh, Abba, the great cultural bridge. 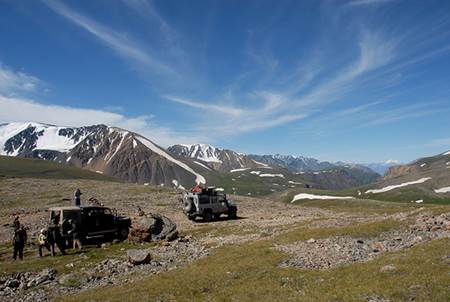 After hours of bouncing and a long struggle to pry a Land Rover out of the mud, we arrived at our camp. The camp wasn’t much, just a shallow dip between two steep foothills, but it opened on a stunning view of the snowy peaks. The smell of the surrounding sagebrush was thick in the air.

“Let’s make beer bread!” our German expedition scientist, Jenny, suggested and soon the camp was alive with tent pitching, chatter and a battle with the chill wind for the right to make a small fire. I drew a grid on my pillow and taught a few people a game that I knew.

We sat huddled around the fire that night clutching short sticks with bits of dough stuck on the ends and watching meteors blaze across the clear sky. The moon appeared and promptly vanished behind a dark hill. I peered up at a nearby mountain ridge, imagining myself standing there looking down on our little speck of light. Would I stand there tomorrow? Was a snow leopard there now, gazing from above?

“We’re splitting up today, to cover more ground,” I heard team leader Adam saying as I shook my head violently to clear the last of morning grogginess and double-checked the equipment in my pack. He pointed at me and a few others. “You guys take the northernmost valley and be sure to check the lake shores for ibex prints.”

So we were setting off into a valley today without our local guide (or quite possibly part-mountain goat) Oleg. That was certainly going to be different.

The six of us set off along the steep curve of the upward slope, our pace purposeful at first and gradually slowing as the thick grass dragged at our feet. I treated the sparse patches of rock and scraggly bushes like islands, doggedly focusing only on reaching the next one and then the next. The ridge of our valley didn’t appear to be getting any closer. I kept my head down to look for prints, but I doubted we’d find any here. 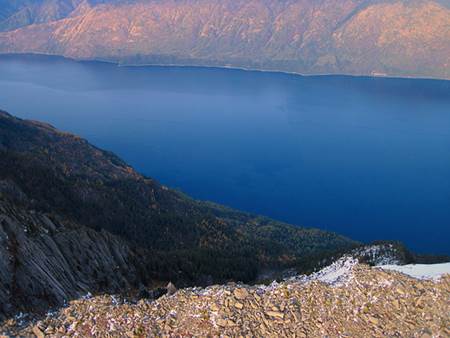 The valley did finally creep closer and the edge swept back to reveal a still, mirrored blue lake walled on all sides by rocky slopes streaked in snow. I blinked at the scene and felt the energy flow back into my limbs at I took it in. I was in Siberia, mere kilometers from the Mongolian boarder, gaping at an azure-blue glacial lake that had almost certainly seen more ibex, snow leopards and golden eagles than it had seen people. “Wow…” was the collective sigh in the group.

We worked our way down the short valley and found a second, deeper lake with a few ibex prints at its shore. I studied the nearby wall of icy rock, picturing the sturdy creatures pounding their way up the rocky slope and disappearing, as we’d seen them do on several occasions already. I wished I could follow the fleeting images in my mind and started to study the valley slopes more seriously. Maybe there was a way up.

There was: near the back of the valley the slope was flatter and slightly more gradual. We’d probably be able to scale it there and then walk along the ridge back in the direction we’d come. I hoped we were allowed to go to the top without Oleg.

“Great idea! I’ll go too,” said Roger, a British man who’d already been to the Altai several times and couldn’t seem to stay away. Well, at least I wasn’t the only one looking for an excuse to be slightly reckless.

“We’ll go back down the valley,” Wan Lin shook her head and indicated another of our companions. “We’re supposed to head back soon.” 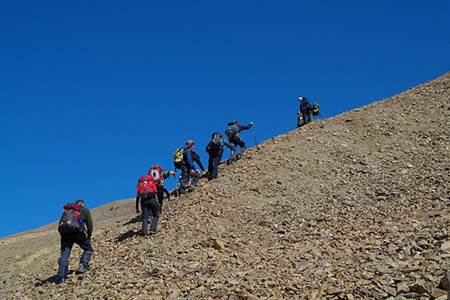 The two Russian women, a bird scientist and a university student, merely nodded their approval and we made sure we had our wildlife scouting equipment close at hand: binoculars, notepads, GPS, tubes with silica beads in case we found any snow leopard scat, check. The four of us glanced up and start climbing.

As we picked along our zigzagging path up the sharp rocks, it was soon clear that I’d never have the powers of a mountain goat. Not even close. Our feet sent lose shale slithering down the slope and we had to stop every few minutes to suck at the thin air. The blue pools quickly began to look alarmingly small before we’d gotten even halfway. My heart started to beat hard and I wondered with slowly rising panic if we were getting in over our heads. I could feel the coursing adrenaline.

It is said in the Altai that the snow leopard is the guardian of the spirit world and exists somewhere between the two worlds, but belongs in neither. When we finally stepped onto the ridge, it truly did feel like standing at the gateway of the spirits and my breath caught in my throat. Time seemed to slow and my ears rang with the silence. Nobody spoke. This was a place where words lost relevance and the sounds of the world felt like a memory. For a moment, it was as though I could sense the very pace of the ancient mountain.

I stood in the snow with the full weight of Siberia at my back and Mongolia spread out before me, watching the shifting patterns of shadow and light left by the clouds on the empty world below. The ridge curved away in an arc to connect with other ridges and spread in a sharp web to the horizon.

We shuffled, bewitched, through this alien world and the only rhythm was the muffled crunching of our feet. Desolate, apocalyptic cities of columnar slate rose above the snow. The icy chill bit into exposed skin, but I barely noticed. I felt like an irreverent intruder, creeping through a frozen citadel of the gods. Perhaps the pale eyes of the ghostly irbis watched our clumsy, gradual descent but we found no signs of them. I swallowed my disappointment, lost in my amazement. 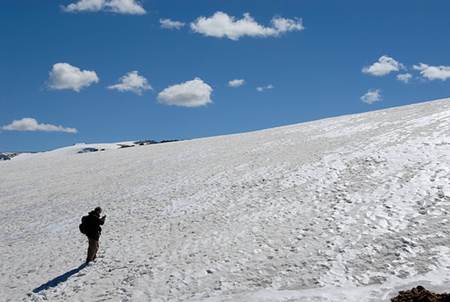 The wind began to whistle and whip, wrenching us from our daze and we picked up our pace down the gradual fall of the slope. I walked lightly over the tumbled rocks as the glacial pools grew closer, eventually breaking into a run when grass appeared again beneath my boots. The sun slipped closer to the hills, washing them in a blaze of gold-green light. I had touched the roof of the world for a moment and then returned.

The cat hadn’t emerged from the myth in this vast Russian borderland, but I didn’t need to see them to sense their presence. The slow creep of civilization is a powerful force, but at least for now the snow leopard would remain as a symbol of resilience and quiet patience in an unforgiving world. I threw myself in the coarse grass and grinned up at the snowy ridge.