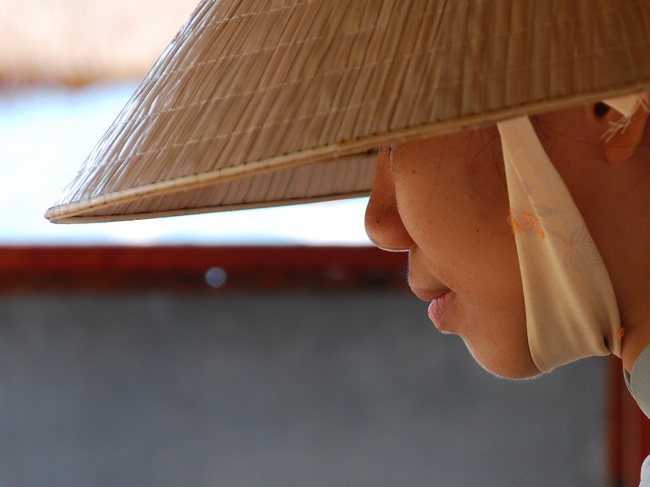 Vi usually worked the afternoon and evening shifts at the cafe. A Catholic born and raised in the south-central coastal city of Nha Trang, she was quieter than her coworkers and more conscientious, too. Because seven-day work weeks are standard for many Vietnamese employed in the travel industry, I saw her each day. I was drawn to the way she treated people–attentively, respectfully, with gentleness.

It was the week of Tet, the Chinese New Year. Specifically, we were entering the Year of the Monkey–the same year in which, in 1968, communist forces launched their stunning offensive against South Vietnamese and American targets. The Tet Offensive was a tactical defeat for the communists, but it rattled the American public who watched it play out on television screens, contributing to the erosion of public support for the war. 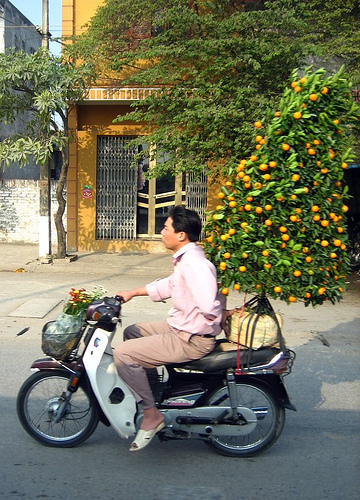 Thirty-six years later, Tet brought to mind anything but that violent year. Instead, a decidedly festive atmosphere filled the city of 300,000 people. Crews stretched celebratory banners across streets. Men prepared the fireworks that would be fired from the roof of city hall. And so many motorbikes were hauling kumquat trees to set up in family homes–a Tet tradition–that the city’s traffic circles looked like gardens run amok.

I was thinking about doing something to mark the new year, as well, something that would take a little bit of courage. Throughout most of my life, I have tended to be–what is the word?–“cautious” in my approach to women. I remember the evening during my sophomore year of college when I asked Paula, a curly-haired blonde from Alabama, out on a date. It did violence to my cardiovascular system. The pounding in my chest verged on breaking a rib, and my face turned red from the strain of it all, which is why several years would pass before I tried that again. Though by now my sophomore year was very much a thing of the past, it still wasn’t my nature to ask out a near stranger.

But travel is about change. And if you throw on top of that the advent of a new year, the traveler may be thoroughly inclined to stretch himself. All this to say: One afternoon after I had been served my banana pancake, I took a deep breath, rose from my chair, and turned toward the counter behind which sat the conscientious waitress, Vi. What I was now doing I likely would have done anyway, but it helped that the two Israelis with whom I had just eaten–a man I had met earlier in the week and a woman I had been traveling with for the past month–were nudging me forward. They too thought highly of Vi. How was it, we had sometimes wondered aloud, that a country so steeped in the ravages of war could still produce such refined beauty?

With my stomach a little in knots, I reached the counter and looked on as Vi turned to face me, probably thinking all I would ask for was a plate of fresh fruit. Then I did it.

I asked if I could treat her to dinner.

Vi looked worried–not mildly worried, but worried like I had just set a grenade on the table and held the pin in my teeth. Crushed by how worried she appeared, I wished there were a grenade on the table, for instead of feeling like a moron I could have attempted chivalry, grabbing the grenade and running until it exploded. Instead, I explained what dinner was–“only eating and talking”–and assured her that “no” was a perfectly legitimate answer.

“Think about it, and if you decide you would enjoy it, just tell me,” I said. “I’ll be sitting at my table reading for the next hour.”

Then I returned to my seat and waited. 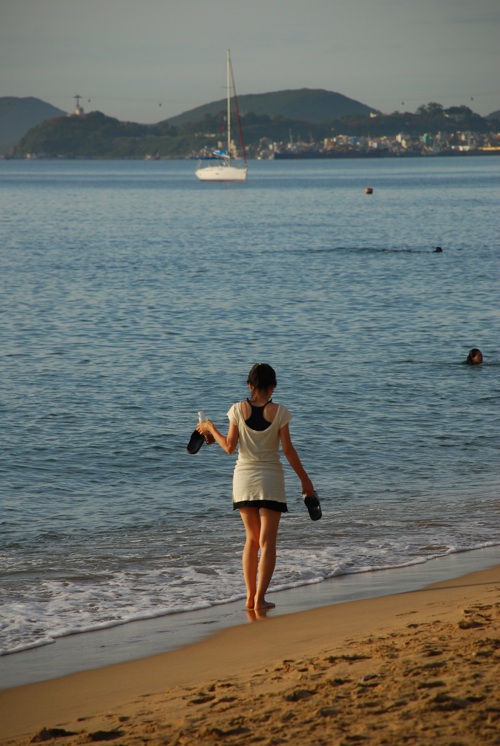 Back at the table, my two Israeli friends inquired how it went. “I don’t know,” I said, “but I think not well. I suspect she’ll never talk to me again, except maybe behind my back as she tells her friends what a frightening experience this was for her.” Feeling deflated yet relieved (at least I had done it), I hoped Vi would recover from the shock I seemed to have given her.

Almost the full hour passed, and I was just about to give up hope and move on when I looked up to see her walking toward us, full of both physical beauty and the poise of one who is well-centered. Her eyes–innocent and uneasy, wanting to trust yet aware of the risk–betrayed how she, too, was stretching herself through the very act of approaching my table. I couldn’t tell if I was more delighted or humbled, but I smiled as softly she said, “Yes.”

The next evening we met outside my hotel. She had borrowed her father’s motorbike and, according to custom, I was the one who would drive us to an elegant Italian restaurant called Cyclo. Only once had I driven a motorbike in Vietnam, and never with a passenger on the back. This is why the five minutes to Cyclo would be the most nerve-racking of the date. Since the previous night, the image of Vi being deskinned on lumpy asphalt had put the fear of God in me. All day I had been replaying the quiet determination with which, after saying yes to my request, she had made clear that the male would be responsible for the driving. And now as we stood before the bike and I expressed my concern to Vi, she calmly indicated that what people might think of her driving a man was more a concern than her possibly being shorn of her epidermis (though she didn’t word it this way). And so, with adrenaline pushing through my veins, a profound sense of responsibility dilating my pupils, and Vi’s beautiful black hair occasionally slapping my face, I drove us to Cyclo.

I cannot recall what we spoke of over dinner, but I know that we shared a small pizza and shrimp pasta, and I remember that I drank a Saigon beer while she drank fresh milk. I also remember that at five dollars this was one of the more expensive meals I would pay for in Vietnam, but that it was worth every penny. 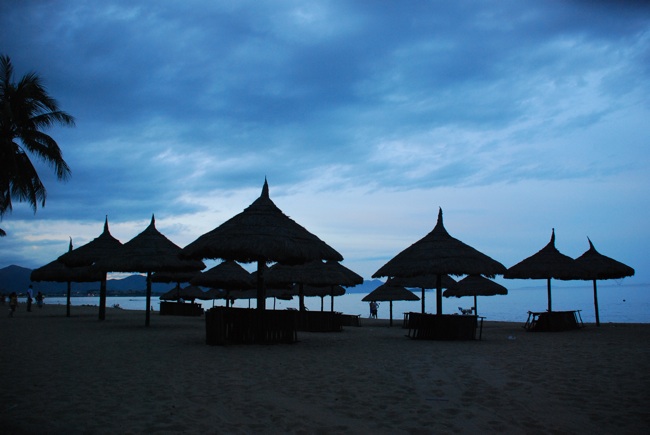 We had only two hours together since her father had set a 9:30 p.m. curfew. With 25 minutes left, we went for a walk on the beach. I asked her which way she would like to go, and rather than choosing the route I thought prettier, she chose the one that had the best lighting. I had noticed that even at dinner she was worried that those who saw us together might think she was a prostitute, or at least a woman with little integrity. By walking under the brighter lights, we could avoid feeding people’s suspicions. When we passed several young men loitering on the sidewalk, they said something to her in Vietnamese and laughed.

“It was very dirty,” she said. “The men think very bad things about a girl with a foreign man.”

Vi told me that she had never been asked out before. I was flabbergasted, unable to comprehend how it was that thousands of backpackers had passed through her cafÃ© without a single one ever doing so. She also said that the night before, when I had asked her to dinner, she wasn’t worried; she was simply confused. She did not trust her English comprehension enough to be certain what I was asking. And even if I were asking her out to dinner, she wondered, why would I want to do that?

The two hours slipped through our fingers as quickly as I knew they would. I would be lying through my teeth if I said I hadn’t gone into this night hoping for even the tiniest kiss. But I was hoping for something even more: to respect her, and to acknowledge her graciousness in saying yes to my invitation for dinner even though it would bring her unwanted attention. And so as we stood beside her motorbike, with the parking attendant just a few feet away, I knew there could be no kiss. I extended my hand instead, even afraid to allow the handshake to linger too long.

Vi offered to drop me off at my hotel, but I knew she was running late and did not wish to delay her any longer. “I will walk,” I said. “It is such a beautiful evening to walk.” And then we smiled at each other in silence, for it is difficult to speak when two people understand that in a moment all they will have left of each other is a memory. Our handshake complete, she climbed onto her motorbike and I backed away.

“Thank you for this evening,” I told her.

“You are a very good man,” she replied.

Early the next morning in a cold rain, my body boarded a bus to leave Nha Trang, but my heart decided to stay behind a while. I knew it would. Rarely does one’s entire being board the bus, train or other vessel that will take him from the person or place he has grown fond of. And so I felt pain as I sat in my seat, watching the palms and rice fields pass by in a blur as the bus carried me farther and farther from Nha Trang. But it was a worthwhile pain, even a cherished pain, the accepted cost of my own little Tet offensive.

All other photos by the author

Joel Carillet, a freelance writer and photographer, is the author of 30 Reasons to Travel: Photographs and Reflections from Southeast Asia. His work has appeared in numerous publications, including several Travelers’ Tales anthologies, the Christian Science Monitor, and WorldHum. Visit Joel Carillet’s website to learn more about his writing and photography, or to check out his weekly photoblog.