Home / WanderTales / Africa / The Tale of the Toilet Frog 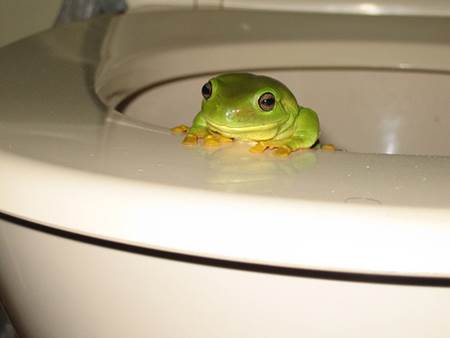 As a survivor of Tanzanian toilets encountered during a week in the Serengeti, I was, much to my husband’s amusement, cautious of all African facilities. So when we joined a busload of intrepid travelers on a South African jaunt from Johannesburg to Cape Town, the first thing I did upon arrival at each new location was inspect the toilet.

Was it clean? Did it flush? Did it have a seat? Contain toilet paper? Sitter or a squatter? The usual.

For the first six nights of our bus tour, every toilet I encountered worked perfectly. All were pristine, the water often colored with that nice blue stuff, proof positive of sanitation. Decent water pressure provided the worry-free flush experience. There were both toilet seats and toilet paper, generally the gentle, cushiony kind. I was in heaven, lulled into a false sense of complacency.

The next evening marked the start of a two-day nightmare.

Dusk had arrived when Marula, our bus, actually a converted safari truck, chugged into an upscale-yet-rustic lodge located outside the Hluhluwe National Park. We all tumbled out, and the resort manager doled out charming cottages, each set into its own secluded jungle clearing. Porters hauled luggage down twisted jungle paths. Within ten minutes we were settled in, sipping wine on our porch while listening to the evening serenade of birds and insects.

My husband monitored the jungle, his eyes suspicious. “I hope that racket isn’t frogs.” He took a huge slug of wine.

“Absolutely not,” I assured him with more certainty than I felt. “It’s cicadas.”

“I hope so. You know how I feel about frogs.”

After we polished off our wine, my husband set off to explore the property. It was time to make my usual toilet inspection. I opened the bathroom door, gazing in reverence at the porcelain fixtures. Someone had folded toilet paper into a neat, pointy tip. A paper strip graced the toilet lid, attesting to its pristine condition. I approached the white, gleaming throne slowly, savoring the moment, before breaking the seal and raising the lid, prepared to execute the final test before availing myself of the facilities–the grand flush.

I glanced into the bowl. With one finger frozen to the handle, I uttered a loud squeal. Stuck to the side, exactly three inches beneath the rim, was a brown, slimy blob, approximately the size of a child’s fist. Tasting bile in the back of my throat, I slammed the lid shut. This toilet was filthy. My heart thundered in my ears. To be doubly sure, I raised the lid again, more cautiously this time, standing at arm’s length before and peeking inside.

The blob had moved. 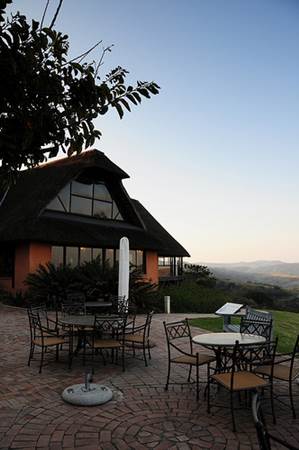 Engaged in a staring contest with a toilet frog, I said a nasty word. Actually, two.

Did I mention my husband has a frog phobia? A full-blown holy-crap-it’s-going-to-attack-me-and-I’m-gonna-die sort of phobia. Even the teeniest of amphibians makes him sprint faster than an Olympic runner on steroids. If he caught wind of our toilet frog, I could kiss a peaceful stay in this lovely place goodbye.

Desperate times called for desperate measures. I reached a decision. The frog had entered through the pipe, so it could exit the same way. With one hand, I pressed the handle. With the other, I waved a cheery buh-bye. Water gushed into the tank, swirled, and carried the creature away with a satisfying gurgle. Mission accomplished.

Next, I devised a plan to prevent my husband from encountering the frog. Ever. Every time we entered the cabin, I hightailed it to the bathroom first to check the toilet–a vanguard attack, so to speak. Hey, it was only for two nights. How hard could it be?

And so the battle began.

Several hours later, we returned from dinner. Like a homing pigeon, my husband headed for the bathroom. Picturing the frog crouched in wait, I threw my body in front of him, slapping his hand off the door handle, babbling something about an emergency situation. Ignoring his look of concern, I zipped into the conflict zone, slammed the door behind me, and made sure it was locked.

Sweating lightly, I tiptoed toward the toilet, cautiously raised the lid, and peered inside. The bowl was empty. My sigh of relief transformed itself into a low moan when I realized the bastard had suctioned its way onto the lid, and was eyeballing me from an upside-down position. I banged the lid shut and thought I heard a tiny splash.

My husband’s muffled voice penetrated my panic. “You okay in there?”

“Dandy,” I lied. “I need privacy.” This was our code for, “Get lost, I have serious bathroom business to attend to, and I don’t want an audience.”

He got the message. “I’ll go read on the deck. But hurry.”

I blew out a sigh of relief. After I heard the door close, I opened the lid and eyed the intruder, who was executing a leisurely breast stroke around the bowl. “You,” I muttered under my breath, “are history.” I flushed that toilet like my life depended on it, holding the handle down for good measure. When the whirlpool receded, the frog bobbed to the surface and stared at me with palpable scorn. As soon as the cistern refilled, I flushed again. This time the bowl was empty. For good measure, I flushed a third time.

It went like that for the entire two days we stayed at this lodge. Each morning, I got up at the crack of dawn and did what had to be done. Every time we entered the cabin, I claimed a greater need, and dashed to the can. It got to the point that my husband suggested calling a doctor. But my strategy worked. Every time I raised the lid, the frog greeted me with a wide-mouthed sneer. Every time, I managed to flush him away so that each time my husband entered the bathroom, he was able to do his business in blissful ignorance.

On the last day, prepared for action, I opened the lid. The bowl was empty. My sigh of relief ended in a groan of despair. Always sneaky, the frog had hidden under the rim until the lid was fully open. Seeing daylight, it immediately scrambled onto the lip of the bowl, poised to spring. I reached for the toilet paper with trembling fingers. The frog was faster. It leaped to the floor. I danced away. It followed. I hopped into the bathtub. 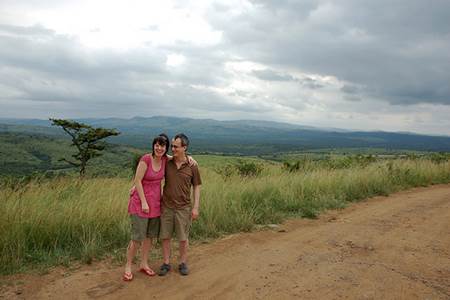 We locked gazes, that frog and I. It didn’t seem intimidated. With a flip of one webbed middle finger in my direction, the sucker swaggered away until it disappeared down the half-inch crack between toilet and floor.

That morning, we left the battleground of woman versus frog, and it’s a good job we did. I’d reached the end of my rope.

For the next two days, I did my best to bite my tongue. It was no use. The Tale of the Toilet Frog begged for release. Over dinner, between sips of South African Cape Riesling and snorts of laughter (mine and that of a couple of fellow-travelers), I confessed to my husband.

After taking a moment to recover, he narrowed his eyes until all I could see were icy blue slits. “Did I ever mention,” he asked innocently, “that I loathe snakes even more than frogs?”

Maureen Fisher writes sassy romance novels that tickle the funny bone, lift the spirits, and warm the heart. By combining writing and traveling, two of her passions, she has experienced many adventures such as swimming with sharks in the Galapagos, walking with Bushmen in the Serengeti, sampling lamb criadillas (don’t ask) for Christmas dinner in Iguazu Falls, snorkeling on the Great Barrier Reef, descending into an Austrian salt mine, visiting the world’s highest lake in Peru, and bouncing from Johannesburg to Cape Town on a bus called “Marula.” To learn more about Maureen and her books, please visit BooksByMaureen.Â