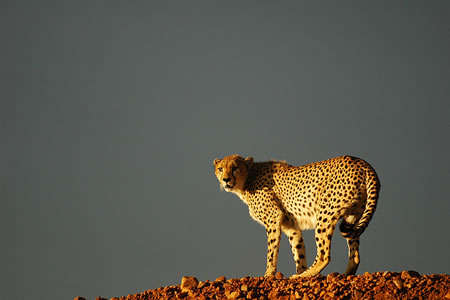 “Everyone out,” says Brent our safari guide who resembles Jude Law’s character in The Talented Mr. Ripley – bronzed, confident, model good looks. He’s the sort of guy who probably not only battles life-threatening situations on a daily basis, but welcomes them. We’ve just spotted a herd of elephant near the Lukula and Luwegu river crossing and are about to try and catch a closer glimpse on foot. Why? I have absolutely no idea. The air is dry and the sun is hot. I’m finding it difficult to pry my fingers away from the car door.

Brent slings his rifle and rests its barrel across his right shoulder as coolly as if he’d flung a cashmere jacket around him before stepping onto a yacht. He turns toward the five us who’ve been invited on this Tanzanian safari, but gazes directly into my eyes.
“If anyone thinks he or she might run, please remain at the car. You’ll put the rest of us in serious danger.”

Is he talking to me? I resent that. Do I look like the running type?

I’ve anticipated this moment for the past six months. After reading aloud a travel story in a New York bookstore, I was approached by a tall, ruggedly hot Englishman (surprisingly able to pull off a beaded necklace) who was a Tanzanian safari guide and had the thickest eyelashes I have ever seen. He bewitched me with one line: “You should come and write about it.” It took about six seconds to agree and having been to Kenya and Tanzania years earlier, I’d actually loved the experience. The film Out of Africa inspired me to take a three-week safari of my own. Perhaps as we spoke I envisioned that scene where Robert Redford washes Meryl Streep’s hair alongside a river while reciting poetry. I don’t think I’d ever met anyone quite like this guy. He possessed such an enviable passion. I was intrigued. What made a man like this want to live in the bush and, more importantly, what kind of shampoo should I bring?

As a writer, I predicted this would be my in depth transformation-revelation piece. I would be just like Karen Blixen, only without the syphilis. And, this guy, with his Simon Baker hair and British accent, would be my Denys Finch-Hatton. I confess when I viewed his website the next morning I may have let the alluring tent dÃ©cor overshadow the “walking” aspect. And, what’s worse, he’s not even here! Of all the luck! So do I feel like running right now? Hell yes!

This excursion hugely differed from my previous African trek where I’d been safely protected behind the closed window of a van and slept in hotels with walls. Now, not only would I not get the story I’d come for, I was about to set out across one of the most remote places on Earth (next to Siberia) and attempt to outsmart wild animals accompanied by a twenty-six year old who could already smell my fear, and an African warrior guide named Kumbi whose spears looked like he’d made them in woodshop.

“This is exactly like hunting without pulling the trigger,” Brent whispers.

As the seven of us creep single file toward a cluster of trees it feels as though I’m treading in quick sand. My throat has completely closed and it’s drier than that dead bush over there next to what appears to be the skull of some unfortunate beast. Looking down I notice heaps of animal dung littering the desert floor as far as the eye can see.Â  Some crap resembles tiny black gumballs, some clumps have reddish berries mixed in like a fruit salad, some loads are larger than I care to imagine from whence it came. 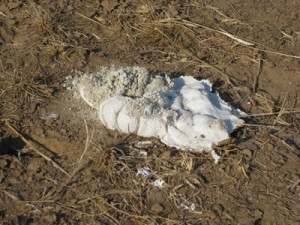 “Hyena,” Brent says breaking up a whitish-hairy pile of poo with his bare hand. He scans the ground for animal tracks and determines who has lurked there recently. He’s very knowledgeable at least. It’s nice to know he’ll be able to tell by the angle of this leopard’s paw print which way the wind was blowing before it killed me.

What in the HELL am I doing here?! I’m not the camping type. I’m not even the outdoor type. I’m an indoor girl! My idea of roughing it is discovering room service stopped serving an hour ago.

I’ve fallen behind the others somewhat. Kumbi waves his hand for me to hurry along, but for some reason the will to back up rather than forge ahead takes over. I’m at least two hundred yards away from Brent and have stopped watching his hand signals and realize I never learned what they meant in the first place. I’ve been in a state of shock since I arrived to find the person who’d invited me had been replaced by Dickie Greenleaf.

I look behind me and surmise a sprint to the land cruiser factored against the dodging of crap mounds in this enormous litter box would take longer than my breath would allow. Glancing forward it occurs to me that Kumbi is wearing a loud red and blue checked wrap cloth and not the suggested khaki colors one should sport on safari. Months ago I’d been told not even to wear white as the animals can spot that color easily. But just look at him! He’s a walking matador cape!

Suddenly, we’re bordering the edge of a wooded area. My eyes are darting around so rapidly I probably look like I’m having a seizure. And I was worried I’d contract malaria? I wish I had malaria right now and was lying in a hospital bed somewhere. I’ve almost gored myself twice on Kumbi’s javelins. I’m about a half a second away from straddling his tiny frame like a human back-pack, but then, Brent speaks out in a regular voice and approaches.

“We must have scared them off,” he says disappointedly.

I’m relieved beyond measure and am secretly proud I didn’t pee my pants. 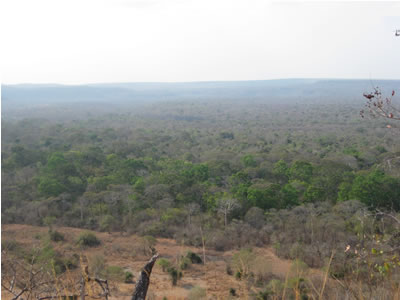 Our group heads back to the car and we begin searching for whatever else we can stumble upon. We see more elephant and graceful impala sprinting up an embankment. Eagles soar above our heads and the occasional wart hog whirls around and darts the other wayÂ  Its erect, wiry tail looks as though it’s giving me the finger. Dozens of low-flying white butterflies swarm around the jeep as we slowly press onward.

“Whoops, lost the road again,” Brent says nonchalantly steering the cruiser back toward the left trampling over high scrub brush in search of the barely detectable path. He’s in his element I tell myself. Surely he knows where he is. Just because it seems like we’re about to drive into the abyss doesn’t mean we’re lost.

As we motor along in the pitch of night, rocking back and forth inside the open vehicle, I reflect back on the days prior where it had taken me over thirty hours to reach Dar es Salaam from Los Angeles. Then, the smaller aircraft that flew an hour and forty-five minutes before touching down upon the Lukula airstrip that was actually more of a dirt road than a runway. How I’d prepared all my questions for Absent Safari Guy and now felt empty inside. The expectations I’d built up in my mind for half a year now were gone. Gone like the sunlight covering this African vastness which now felt even bigger in the dark.

I tilt my head back as we bounce along marveling at the night sky smattered with a million constellations. The sweet scent of jasmine complements the starry canvas.

“There’s the Milky Way,” Rob, a photographer, points out. 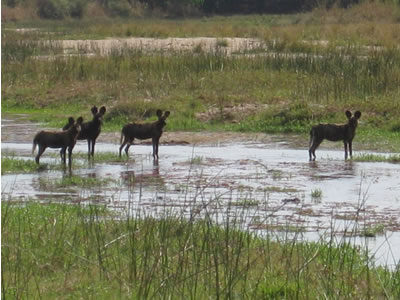 For the first time all day I feel something shift in me. Maybe this place wasn’t so bad after all.Â  Maybe my inner bush woman just needed some time to come out. Tomorrow, I tell myself, I will be brave like them. I will not run.

Just then the headlights shine into the branches of a tall tree. Two close-set, glowing eyes reflect out from the blackness.

Earlier that day when I’d been given a tour of my sleeping quarters, Brent said not to worry if in the middle of the night I heard the clatter of toiletries being knocked over outside.

“There’s a bush baby that seems to favor your tent,” he’d remarked.

Now all I can think about are those beady little eyes peering through the mesh flaps behind my bed when we get back. That lime green shampoo bottle I’d left near the pull-shower is definitely going down.

Night falls with a cacophony of surprises in the Lukula Selous. After dinner by the riverside, guides escorted us to our beds carrying blue-lit lanterns. For the next few days I would reside alone in Number Four which was the very last tent in a row covering what seemed to be a half-mile area along the river. For some reason I decide to sleep in a dress. I figure if I have to run screaming from here I’d like to be fully clothed when I do.

Summon the somewhat low buzz of the cicada. Now amp that up about ten thousand times, throw in crickets, bull frogs, freaky birds that sound like infants being tortured, the snapping of twigs, crackling leaves, and a kind of muffled sigh that I figure has to be either a lion exhaling or the Devil snickering. I stay awake with eyes so wide, b 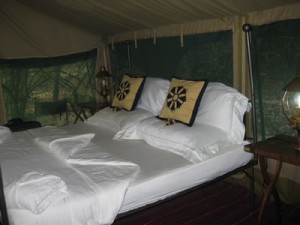 linking once every two minutes, heart thumping to the beats of the forest. I promise to never again curse the ambulance sirens around my LA apartment, or the squalling baby who lives upstairs.

I realize when I awake and stick my wristwatch up to the flickering candle behind a glass case it’s 2:30 a.m. Only three hours have passed since I climbed into bed and managed to sleep through this concert of night lurkers. And, thanks to the four glasses of red wine I’d chugged at dinner to distract my attention from the bat that was circling the dining tent’s light, nature is also calling inside of me, which means now I must unzip the flap and go outside to the enclosed bathroom area. It’s basically an open-air toilet surrounded by a six-foot bamboo wall, no ceiling, just immense trees that appear like a cathedral’s roof hundreds of feet in the air.

I sit down upon my al fresco throne and look up. I glimpse Orion’s Belt for the first time in my life peeking through the branches high above me.

Then somewhere mid-stream — a noise so terrifying, so evil, that I wonder if a person can actually faint while urinating.