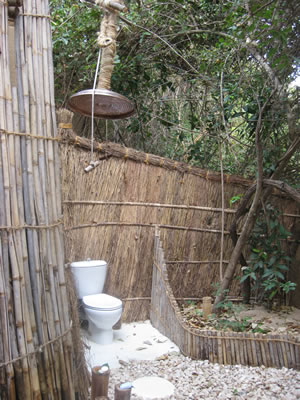 A deep, long, ear-piercing bellow followed by three short laughing grunts rattles me to the bone. I clasp my hands in prayer position and cry, “Please don’t kill me! Please don’t kill me!” What I don’t know is that it’s a hippopotamus roar coming from a mile away. (I will later discover at breakfast that sound ricochets off the river at night and makes things sound much closer than they actually are, but nobody prepared me for this charming slight of ear trick.)

I stare out at the two cut-out peep holes in the straw wall in front of me which suddenly remind me of circus hoops that lions and tigers are trained to leap through on command. Any minute a snow-white leopard is going to shoot through one of these windows and carry me off in her teeth. I scurry back to bed where I will lie awake for the next three hours until dawn. My only solace is the patter of falling dried leaves rustled loose by wind resembling the sound of rain as they hit the tarp covering my tent.

Is that Brent’s voice on a walkie-talkie I hear? Noooooo, it can’t be. I’m losing it.

Soon I’m dressing in the dark for the morning drive. I’ve somehow lost my MAC eye pencil and for once, don’t care. During cooked-to-order omelets by our attentive staff, I mention to Brent that I thought I heard him talking in the middle of the night on a radio.

“Oh yeah, the guides woke me up around 3:00 a.m. A hippo wandered into camp,” he says taking a bite of sausage. “He’s all bloody…probably been beat up in a fight.”

Had this thing been as close as he’d sounded last night, or was he just an echo from afar? I don’t even want to think about it.

“We’re going to try and sneak up on those Cape buffalo,” Brent says winding down a path leading to the unspoiled African playground. The incredible thing about the Selous is the remoteness. They’re not kidding when they say: 300,000 acres and only YOU. Watching the sunrise through the Baobab trees has given me a newfound sense of bravery. So what if I’ve only slept three hours. The crisp morning air feels like a big smack in the face. Bring on the game.

The cruiser stops which means one thing: Everyone out.

I can do this. It’s just like a walk in the park — a very large park, and instead of tossing a Frisbee around we’re stalking large, hideous animals that weigh more than garbage trucks.

After a few minutes of searching for the illusive herd, I’m positive Brent’s startled to find me at the front of the pack when he does a double-take. I don’t need that British guy. I am so kicking ass at this.

When I was a little girl, my younger brother and I would try to scare our cat, Big Kitty, who’d be curled up asleep on a living room chair. If we reached her before she opened her eyes, we’d poke her in the ribs which would then send her skyward as if she’d been jolted with jumper cables. There’s nothing funnier than an airborne feline when you’re ten years old. I have to say there was a sense of achievement if we pulled it off. This was sort of like that, only on a much more insane scale. 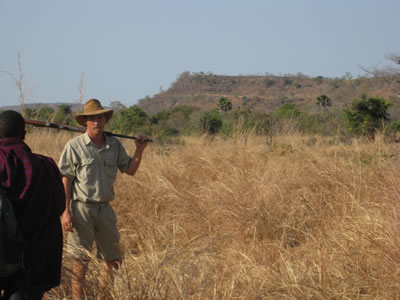 I’m doing the breaststroke through seven-foot tall grass. We’re swimming through a sea of wisp and I am strangely not afraid. I’m conscious of my every step. I’ve pushed my designer sunglasses atop my head and am thankful I wore long pants today. I am a hunter. I’m exhilarated beyond compare. I feel drunk with sleep deprivation, but I’m seriously having fun.

After about an hour we come upon one of the rivers and see the dark grouping of buffalo downstream. We remove our shoes and cross the shallow water to the other side. I put my hiking boots back on and take my place in line only now, I’ve moved a few spots, or rather, all the way back and follow last — again. There’s something about the dense thicket that frightens me. It’s serving as a giant curtain that, if raised, I may keel over when I see what’s behind it.

“Everyone down!” Brent orders.

I’m stunned to see him plop down on the ground. He and the others are scooting along in the sand on their butts! This can’t be good?!

I’m not getting down. No way. Besides, there’s an elephant turd the size of a coconut in front of me. Talk about the ultimate skid mark.

Kumbi motions with his hand for me to sit down. I refuse, but crouch as low as I’m humanly able. Suddenly the thundering sound of a stampede erupts. The land rumbles like an 8.2 earthquake might sound. Graham sachets toward me while Herbie bolts behind a large tree. I see dust rising up. I then assume a track athlete’s starting position.

Yet, I can hear Brent’s spiel from yesterday taunting me.

I will not run.

Instead, I spring to my feet then look right. There’s a twig-like tree trunk one foot away from me. Its diameter is that of a stop sign pole which I grab onto with both hands. I’m clutching on for dear life with my eyes closed. Stephanie, a travel agent from Cape Town and the only other female, starts laughing. I probably look like a tightrope walker who’s suddenly lost her nerve. I’m sure Kumbi will howl with laughter back at his village talking about the idiot blonde woman who camouflaged herself behind a stick. I can see him now. He’ll grip one of his spears for a hilarious imitation.

Brent rushes over with concern. He really is quite something, this brave young man. 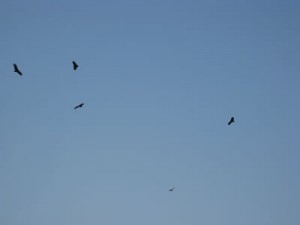 He’s grinning and nodding with what hopefully signifies admiration for what would prove to be one of the most courageous feats of my life, or the stupidest.

“You never ignore vultures,” Brent says pointing up to the sky. I learn that these enormous black birds follow the best animal hunters in hopes of swooping in after a kill. I’m told where they fly overhead, there may be wild dogs. They’re quite rare apparently and almost extinct in these parts. We’ve paralleled the Chi River for about twenty minutes and then spot four brown and black dappled wild dogs lazing upstream. They stand motionless for a couple of minutes, then dash into the outlying brush.

“Let’s see if we can get a peek at them,” says Brent, rifle in hand.

I’m the first one out of the car and have already begun unlacing my boots. We wade on top of the riverbed in bare feet. The water is cool and clear. I am overcome with a strange sense of smell. I swear the scent of their fur is still present. I almost feel like a wild dog myself. I’m in bewildered awe to think I’m now covering their tracks with my footprints, standing where they just had lain, yet still look up to make sure the vultures are not hovering over our heads. I’m visually struck by neon green sprigs of clover and small fishes swimming with every stride — footsteps splashing through water the only sound.

Clarity comes softly, quietly. I feel so humbled, ashamed; suddenly beholden to the man who wasn’t there. What a privilege to have been asked here. For the first time, my heart sings a song I’ve never heard, but words comes easily and I murmur, “Bless you, Anton. Bless you.” 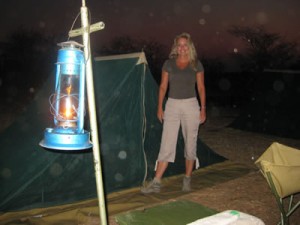 Maybe life is like a walking safari. If you venture out expecting lions and leopards all the time you’ll almost always never get them. Maybe the best things are the ones you never knew you wanted to see. The ones that, scary as they may seem, were just the things you needed to unleash reality.

I’d selfishly written my story before even reaching Africa. I’d romanticized scenarios, fabricated settings, invented fantastical dialogue, and almost overlooked the lesson I’d been sent to learn — to live life on foot and not in my head, with fearlessness, presence, without expectation, and above all, with gratitude.

I’d survived three days in the bush and lived to tell the tale, my tale, not some ridiculous movie sequel.

I’d been given a gift — an incredible gift.

“You should come and write about it,” he once said.

Jill Paris is a writer based in Los Angeles. She holds master’s degrees in Humanities and Professional Writing. Her work has appeared in The Best Travel Writing 2009, Travel Africa and Africa Geographic magazines and a variety of online publications. She is currently writing a book based on her short story “My Lucky Safari.” This piece was published in the March 2010 issue of Travel Africa magazine.