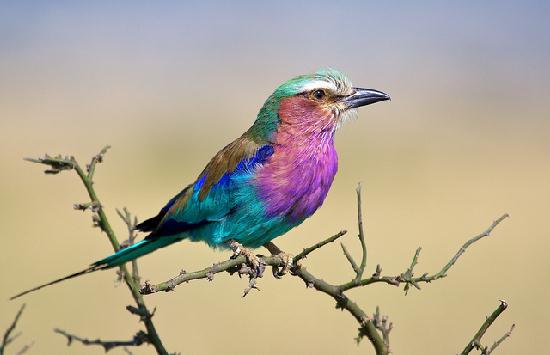 Since I was a young girl, conversations with dad are more often than not interrupted by him raising his hand like a stop sign and announcing with great importance, “Listen, there’s a black-throated blue warbler,” or some such name. He cocks his ear toward the noise, and with pursed lips calls out a perfect, “pish, pish, pish,” hoping to entice the bird closer. A birder’s universal call, this sound can be perfected by studying The Art of Pishing, (audio CD included) by Pete Dune. A copy of it, along with What Bird Did That? pictures of windshield bird-splats accompanied by detailed descriptions of color, contents and consistency – are among the hundred or so birding books my dad owns. From a psychological viewpoint it’s easy to understand why I view all birds as competition for my father’s attention, and developed no interest whatsoever in the winged creatures.

No one is spared of his avian obsession. In the middle of a tennis match with my mother he overhears a stranger in the adjacent court identify a bird flying overhead as a Peregrine Falcon. My dad doesn’t see the bird but doubts the accuracy of the stranger’s call. Off court, approaching the other birder he asks, “Are you sure that wasn’t a Merlin?” With a confidence that comes from birding since he was six, he adds, “Peregrines are rarely seen here.” Before the man can answer, the same bird flies overhead again, this time chasing an egret, proof to my dad that the stranger’s identification is correct. They become the best of friends, traveling the world in search of birds.

Into Africa
There are two kinds of people who sign up for an African safari. Most, myself included, want to see “The Big Five”— lion, leopard, rhino, buffalo and elephant. If those large predators are engaged in a chase, or a kill, that’s even better. The other people are… the birders. So when my father announces he wants to join me on a trip to Africa I have planned for myself, I am delighted, but feel I must clarify, “Dad, you know this is not a birding trip.”

“Fine by me,” he replies, “I won’t even mention my interest in birds to anyone so I don’t interfere with any part of your trip.” 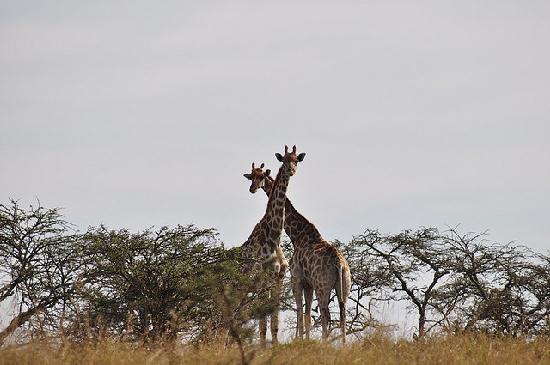 True to his word, for the first part of our journey, he doesn’t mention it. He doesn’t need to. My dad is never without a pair of binoculars hanging from his neck, and a pencil and local bird list sticking out of his back pocket, ready to identify any flying species.

At our first stop we meet up with a group of my friends at a private reserve near Kruger National Park. An undercurrent of excitement flows through my body as we hike within yards of zebra, giraffe, baboon and the large antelope kudu and red hartebeest. Some of the animals snort, warning us we are a little too close. Others flee, almost touching us as they gallop past. It is a special treat to walk in the African bush without an armed guide, but my father’s thrill comes only from adding little bee-eaters and black-eyed bulbuls to his birding list.

“Where is your father?” becomes the group’s mantra, and I am sure to find him, off on his own, whispering the identifying characteristics of the bird species he’s filming, into the microphone of his camcorder. In the Northern Transvaal, my friends and I climb among rock cliffs where we discover fresh leopard prints in the sand. Meanwhile, my dad, wearing his favorite khaki flop hat that is one size too big, stalks lanner falcons, red-breasted hornbills and grey lourie’s. The group cooks stew and bread in a three-legged “pokipot” over an open fire, while under the stars our guide talks about the history of the area, and my dad checks off boxes on his birding list. He is especially excited by “lifers;” those birds he has never seen before. Near the Limpopo River, I crawl into caves to look at paintings of elongated giraffe-like animals, and funny faced distorted bodies drawn hundreds of years ago by the earliest bushman. My father videos brown snake eagles, red-winged starlings and violet-eared waxbills. 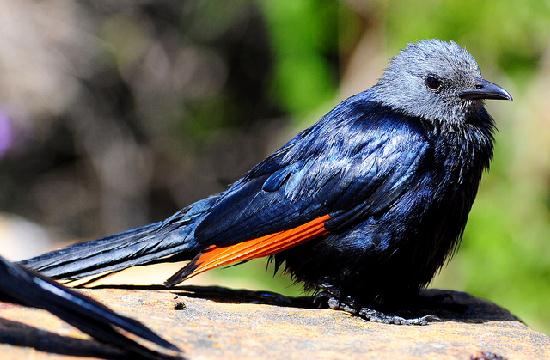 For the most anticipated part of my itinerary, dad and I fly alone to Botswana to visit two different lodges chosen because of their large populations of my favorite animals – cats and elephants. Wrapped in blankets against the 5:30 a.m. chill, we climb into the open Land Rover for our first wildlife drive. Impatient to get into the bush (I haven’t been to Africa for ten years), I hardly hear Tim, our driver/guide, recite the do’s and don’ts of safari etiquette. I wish he would stop talking so we could get going as not to miss any early morning big game sightings.

Finally, Tim finishes his diatribe. “So let’s push off,” he says.

“Yes,” I concur, with an enthusiastic clap of my hands.

But before he starts the engine, he turns again toward my father and me in the back seat and asks, “Are either of you birders?”

Why… do they always ask that?

“I’m not. I want to focus on mammals, especially lions and elephants,” I respond with an I’m-in-charge attitude, hoping Tim realizes I am speaking for my father and myself.

Then my father murmurs something about… “birder, “ followed by: “But this is my daughter’s trip and I don’t want to ruin it for her, so let’s focus on large animals.”

As I’m thinking how sweet it is of my dad to say this, I hear him add, “But if we see a bird or two that would be great.” A bird or two? Is he joking? Birds are everywhere, they’re inescapable.

Tim’s face lights up as if he just caught up with a long lost friend, “Oh wonderful, I’m a birder too,” he says. From the detail with which Tim and his new best buddy then compare binoculars, I realize I’m doomed.

Birders are Best
It’s known amongst safari tour operators in Africa that drivers are happiest when they have birding clients. I’m not sure why. Maybe it’s because although birds are everywhere, they are difficult to get a good look at, so the drivers have to work harder, and get tipped accordingly. Or, after years of pointing out mammals, complacent drivers find a rewarding challenge in pointing out a rarely or never seen bird from the hundreds of species on this continent. But I really don’t know the exact reasons that drivers love clients who are birders because I always avoid those vehicles in favor of the groups looking for “real” wildlife. 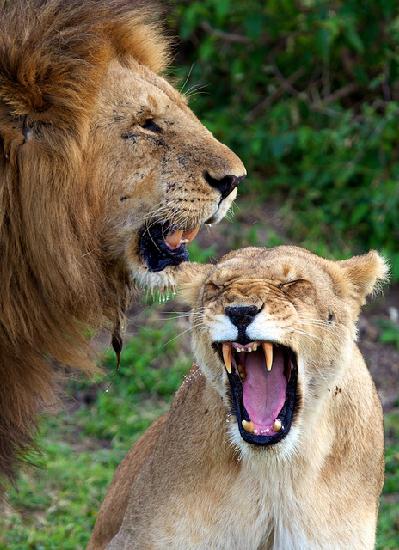 A few minutes into our drive we stop. I scan the area, but see nothing. Tim is pointing and to the left of us I catch a glimpse of purple, green, yellow, orange and blue feathers shimmering in the first morning light. This is a beautiful bird, I admit to myself. OK, I’ve seen it, let’s move on. The lilac-breasted roller is a lifer for my father, and he wants to see the male roll earthward from the sky in his mating dance. Oh great, now we have a specific goal for the day’s outing.

During our two-hour drive we stop more than a school bus full of kids. We halt and stare at every brown, blue, yellow, big, little, flying and sitting bird. I listen to discussions of wing-spans, beak shapes and throat colors, and I learn new names like Hammerkop and Bateleur.

An hour and a half, and twelve lilac-breasted roller sightings (among many other species) later, we see a pride of seven lion, sleeping belly up, their baseball mitt-size paws facing the sky. Finally! I rest my elbows on the edge of the vehicle’s door for a more comfortable viewing position, and focus my father’s hand-me-down pair of binoculars on their blood-stained, fly-covered fur. The lions twitching whiskers, and the way their full bellies move up and down with each breath are riveting.

After a few minutes, Tim interrupts my big cat trance, “They aren’t going to do anything, so let’s push onward.”

So we can find some more birds which are doing so much, I think to myself. I would rather spend the rest of the day watching these lions sleep. 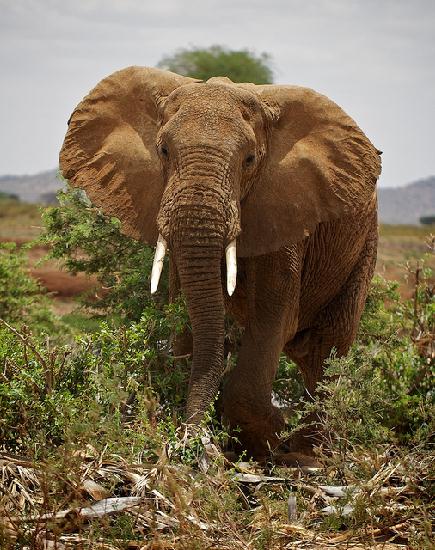 It’s About the Elephants
Our remaining four wildlife drives at Chitabe Camp follow the same pattern. My needs to see anything larger than an eagle are accommodated, but lack the obvious enthusiasm that accompanies any and all bird sightings. I have practically become a birder myself by osmosis alone, so at our next lodge, with only two days left before we go home, I am not taking any chances. I explain to my father, “It is probably obvious by the name of the lodge, “Savute Elephant Camp” that I really want to focus on elephants here.”

“Yes, of course,” he agrees. I’ve heard that before. For added assurance I find a private guide to lead us on a big-game walking experience.

“We have no interest in seeing birds,” I tell Clive when I hire him. He mentions a rogue bull elephant in the area. “We will try to find him,” he says.

“Perfect,” I agree. This man has my interests in mind.

In single file I follow Clive and the shotgun slung over his right shoulder; my father behind me. When we catch up to the massive grey young bull, Clive’s hand motions us to go slow, be quiet, and stay close to him.

He whispers, “Adolescent male elephants are ousted from the matriarchal herd to find a new group where they can mate, so they can be unpredictable and dangerous.”

Clive’s hand signals us to stop; any further and we would be too close for comfort. The bull moves from one mopane tree to the next, snapping branches like twigs and stripping the red leaves, seemingly oblivious to his audience of three. As I turn to share this adrenaline pumping moment with my dad, the massive creature begins to walk away. At the same moment, Clive and I realize my dad is nowhere in sight.

“We can’t follow the elephant until we find your father; I don’t want him getting lost out here,” Clive insists. I know he is right, but I’m reluctant to let the elephant get any further away from us. 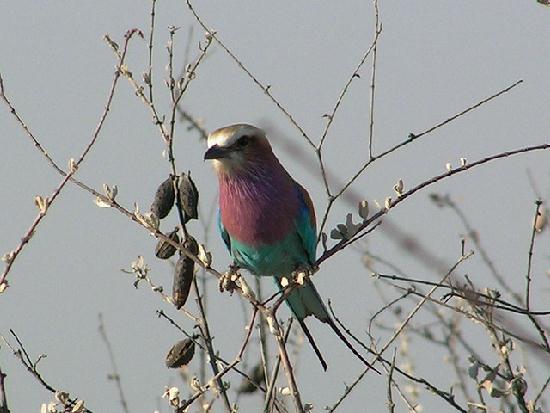 Turning around I can see my father in the distance, half hidden behind a thick bush, video camera leading him in the opposite direction from the elephant and us. His lens is focused on a tree branch, on top of which sits a lilac-breasted roller.

Catching up to him, I plead, “Dad, you have seen hundreds of lilac-breasted rollers already, please can you walk with us, the elephant’s getting away.”

“You’ve seen a hundred elephants already,” he retaliates. We stare at each other for a tension-filled moment, and then we both start to laugh. The noise startles the bird and it flies off, while my elephant disappears into thick bush.

Back home in the States my father sends me a gift for including him on my African journey. I unwrap the package to find a two by three foot size poster of a lilac-breasted roller.

You can find more about Lori Robinson and her adventures at AFRICAINSIDE.ORG