Home / WanderTales / Africa / For Our Injuries 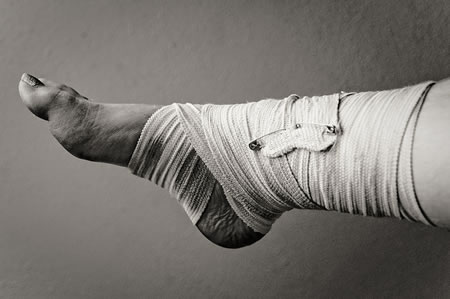 Hawa is spitting on my ankle with an intensity and rhythm generally reserved for jazz musicians and train wheels. Her obese forearms end abruptly at her little hands, her forefinger and thumb flattened from years of spinning cotton on a drop-spindle. She opens a jar of shea oil, a concoction that, when unrefined, is grey and smells acrid in the same unfortunate way as several bodily substances. She starts pouring it over my foot, and I wonder if I will ever be able to scrub away the smell.

I live in Sikoroni, literally “Little Old Shea Tree,” a rapidly modernizing town of 60,000 people. Perched on the hill overlooking the capital city of Bamako, Mali, this town has grown wizened. It is so old that the unpaved streets have sunk three feet into the bedrock. It maintains an introverted, ancient nobility. Yet I have learned more about R. Kelly and 50 Cent here than in my hometown in Vermont. My metal door has the gang tag “Death Fro”– a portmanteau of “death row” and “afro”– scrawled across it in car paint.

Hawa crushes a paracetamol tablet and adds it to the mixture of saliva and oil on my twisted ankle. My twisted ankle represents one more shortcoming in a long line of inadequacies: I cannot cook on charcoal stoves, I cannot sing the commercial for Maggi bullion in Bambara, I cannot spin cotton, I sure as hell can’t dance, and evidently walking outside our compound at night is beyond my capacity as well.

Hawa calls me Alimisa, the word for “Thursday,” the day I was born. Supposedly it’s a humble name, not religiously flashy like a Friday, nor ambitious like a Monday. Not lazy like a Sunday, nor torturous like a hot work-filled Wednesday. Thursday is a diligent day.

She says she knew I was a Thursday the night that I came home and offered to rub her feet. The phrase I used, “digidigitigi,” has a slightly different connotation than I intended. She said that she knew I was a Thursday, not only because I could laugh off the fact that I offered a 55-year-old woman my sexual services, but also because I deigned myself, in all my tubabu (white person) grandeur, to rub her swollen feet. Now, with my hurt ankle, she has the chance to return the favor.

And amazingly, her concoction of shea oil, spit and paracetamol works. I don’t know if it is her attentiveness, her vigor, her convocation of spirits or her sheer force of will, but I (a thoroughly hardened cynic and pre-med student) no longer feel the ache of tendons rubbing at wrong angles.

After my ankle is functional, Hawa takes me to the river. Sikoroni’s ‘river’ doesn’t deserve the name: it is but a little opaque trickle of fabric dye and sewage. We come often to collect reeds for her work. She washes and binds these reeds into bundles and sells them for people to put into ceramic water storage containers to freshen the taste. These reeds smell like talcum powder mixed with hot tea, and are a nice contrast to the pervasive stench of shea oil.

Hawa must weigh close to 300 pounds, so her 12-year-old helper, Jumah, and I do most of the picking. Hawa also insists that I start coming to market with her to sell the bundles: the presence of a tubabu is just the kind of publicity she needs. “The white woman likes them! Come buy your reeds, just 10 doromÃ© per bundle!” 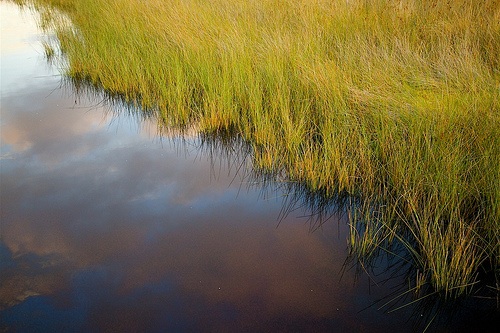 During these river excursions, Hawa often entrusts me with her jar of shea oil, which she carries like a religious talisman, regardless of its anticipated utility. On this particular day, I pick up the slippery glass mayonnaise jar from the rock where I left it, and promptly drop it. The goop mingles with the river sludge, a further pollutant added to the mix. Hawa waddles over in her yellow muumuu and blue head wrap.

“Go get the paracetamol!” she yells to me. Like any good Thursday, I do as I am told.

“What are we doing?”

She throws the crushed paracetamol on the spit and shea oil. “We are healing Sikoroni.”

Hawa’s husband died in September. She was the least favored of his three wives, and of the lowest caste. Her co-wives have ceilings. They have electricity that works more often than not. They have cheap fuzzy Chinese pseudo-velvet blankets. Most importantly, they have sons (plural) to provide them with Lipton tea, mayonnaise, and the other luxuries that Hawa buys only on Muslim holidays. 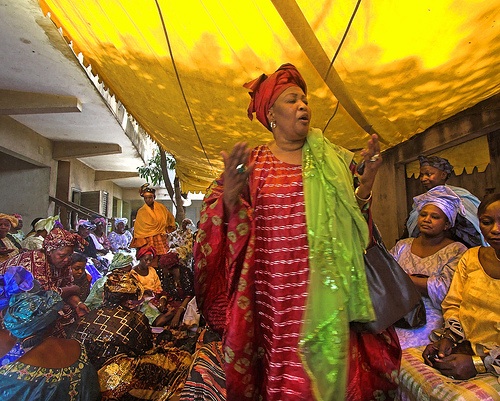 When I tell her I would never enter a polygamous marriage her response is, “You want to have 12 kids by yourself?” She loves her co-wives, without fail. I am not so sure if she extended the same emotion to her husband.

When one’s husband dies in Mali, the widow enters a four-month and 10-day period of veuvage, or widowhood. During this time, the widow dresses in blue and resides at home, shunning male contact. Because of her veuvage, Hawa can not come to the opening ceremony for my public health project, but she understands the goal of the project, and that our jobs are not so different. We are both, in our own ways, trying to heal Sikoroni.

Hawa describes the dance that the village youth will perform after my short speech. Dressed in a shaggy rattan monster suit, a dancer will terrorize a village, only to be outwitted and out-danced by a sprightly youth. The dugutigi (chief of the village) will then take away the monster’s stick legs. This act is meant to symbolize gaining control over Sikoroni’s burgeoning health crisis.

As I sit on the veranda with Hawa, she explains to me the various bad omens I ought to avoid. As I leave for the ceremony, she showers me in a cascade of blessings. I repeat the words “Amiina, Amiina, Amiina,” (“Amen, Amen, Amen.”) long after I leave the compound. There are, after all, so many ways one can go wrong.

After the ceremony, I walk back through the sinking streets, past the walls scrawled with gang signs, over the treacherous rocks. Hawa is inside the house, praying. There is a bottle of shea oil on my stoop and a note, written by some hired scribe. It reads: