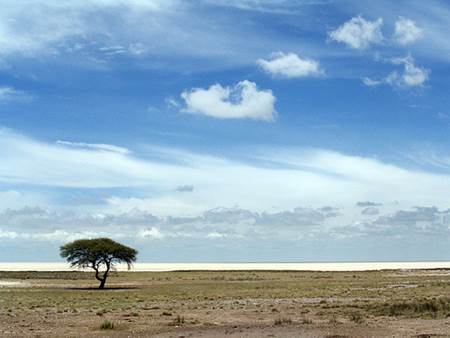 Clutching my throat, I asked my guide Hans, “Do you know what plant this is?”

“That’s not a good plant. It’s not indigenous to here, and you shouldn’t touch it. You need to wash your hands thoroughly.”

“I took a bite of it and now my mouth is burning. Really burning. It’s like I’m gargling with carbolic acid,” I managed to explain in a hoarse voice, as my throat swelled tighter and tighter.

Anthony, our other guide, heard me describe my symptoms, and told me that the locals use milk to cut down on the burning, and ran off to get my first of what would turn out to be several liters of milk for the day.

You see, moments before, while walking to breakfast with my roommate Anna, I was enjoying breathing in the plumeria-like smell of a white flowering tree, fresh with the morning’s dew. Surrounded by the flora and fauna of a new country, I was eager to taste its smells. I couldn’t help myself from breaking off a stem of plant I thought I recognized and clamped down on it. I expected to taste the salty flavor of a drought-resistant plant I had tried days before when learning about the cultural habits of the indigenous Mafwe tribe in northern Namibia, who taught us all about the plants and herbs they used for cooking and medicine.

Neville, my fellow traveler from Australia, who is a medicine man there, took one look at the plant I was holding, and named it immediately.

Neville’s face went white, and the tears starting flowing down my face.

“Why are you crying?” 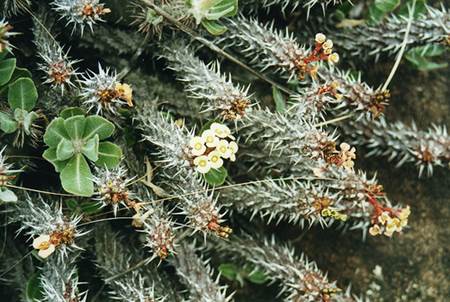 “Well, I’m scared for you, too. However, I think you would be writhing on the floor right now if you ingested too much, so let’s just closely monitor what happens next. I’m here to look out for you.”

And I believed him. From this moment forward he was to be my lifeline.

My guardian angel Neville was going to be with me, whether I got better or not. Far from family and friends, and on a work trip in the middle Kalahari Bushman lands, it was comforting to know that someone I trusted would be there regardless.

I went to the bathroom to compose myself while they called for a doctor. I took a washcloth and scraped my tongue, my inner cheeks, and the back of my throat. I spit profusely, like a first-base coach on the sidelines. But I couldn’t get rid of the taste of what I did. I had poisoned myself.

A local naturalist, the closest thing to a doctor in that area, came over to take a look at me. Like Neville, he wanted to know HOW LONG the euphorbia had been in my mouth.

“Not long” I replied. “I bit down on it and it was only in my mouth for a couple of seconds.”

“Well, there really is no antidote for the neurotoxins that are in your body right now. What we CAN do is get you to the nearest doctor for a shot to help alleviate the pain. I don’t think you took enough for it to be lethal. The doctor is a three-hour drive away, two and a half if we leave right now and drive quickly.”

Wait a minute. Did he just use the word LETHAL?

“More than likely, you are just going to have to wait four to five days for the poison to course its way through your system.”

At this point in the waiting game, my body had entered a defensive phase, and was in total “fight” mode. The surge of adrenaline was impressive. I felt like a Super Woman! I think the saying “What doesn’t kill you makes you stronger” is completely true.

“Anybody need any cars lifted, or heavy loads carried?” I asked. 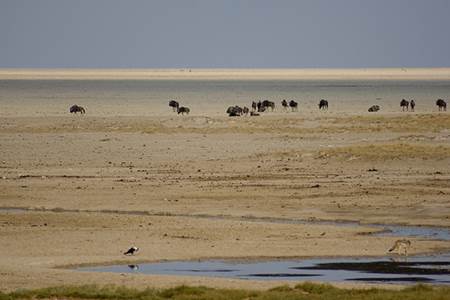 “Wow! Your humorous demeanor during this time is astounding,” said Anna, in disbelief that I could be so jovial despite the circumstances.

“Well, I’m either going to live, or I’m going to die. Might as well make the most of it.”

After my initial adrenaline panic, my mind and body slowed down and I thought, “Could this really be the end? Am I really going to be sent home in a box because I ate a wrong bush in Namibia?”

I then succumbed to a certain calmness I have never known before. I felt a profound sense of peace. My life held no regrets. I had a great family, good friends. I had seen a lot of the world and met some incredible people. I could die now, and peacefully.

During this time I also had visions.

I imagined how my friends and colleagues at the Adventure Travel World Summit that was taking place the following day would be affected by my loss, knowing that my death would put a damper on the whole event. I envisioned my parents getting word that I had passed away while on my trip, and could see my mother shaking her head, saying “Oh, Kristen,” partway disappointed that I had been so silly in contributing to my own death, and yet on the other hand, not at all surprised. She above anybody else knew that I had the curiosity of a three-year-old child. It made me love my mother more for understanding me so well.

Everyone else, I saw, would miss me, but would remember fondly my curiosity of the world, and my courage in making it a large part of my life. I saw that I had even inspired a few people to make positive changes, and that made me proud. I could go now…

But, I didn’t go. And soon after these visions, my African tour group (who were more like my family now) and I needed to continue on our journey. 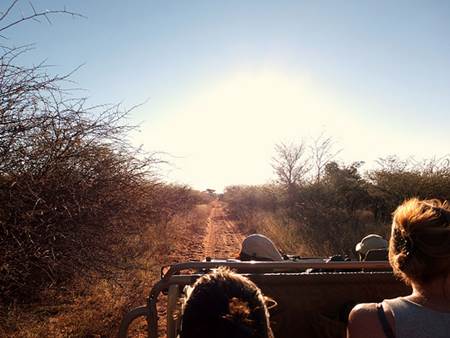 After driving for over three hours through vast landscapes, they asked if I wanted to stop in at the doctor of the nearby town, but I opted not to go for the pain shot. The milk was doing wonders for the burning sensation, even though I couldn’t go more than about seven seconds without the burning returning. My biggest challenge at that point was not vomiting, as a stomach full of milk and acid, combined with driving on remote, bumpy roads in a Land Rover were not really compatible.

I learned more about the plant from our guides as we drove. Locals use euphorbia as a barrier, protecting their crops or homesteads, as most animals steer clear of the plant, so it’s used quite a bit in hedges. Apparently, the only wild animal that can eat the euphorbia plant and get away with it is the rhino. Last time I checked, I weighed slightly less than a rhino. The nickname of Rhino Gill stuck for the duration of the trip. Later I learned that this euphorbia plant was also used to put on the ends of arrowheads, in order to paralyze and/or kill the targeted prey.

As for me, I dealt with horrible symptoms as the poison made its way down my body, including massive heart-burn and excruciating pain as it coursed through my liver and kidneys, so much that I thought something was bursting. But, with Neville’s guidance and reassurance, and with another higher spiritual protector, I made it to our destination alive, perhaps a bit more humbled.

Two days later our group was to meet with the King of Nkangera. This was a big deal, as I was there to document the meeting of indigenous chiefs, kings, and spiritual leaders from around the world. As guests of the King, we were stack-ranked by order of importance to meet him. Those who were high-ranking, held the wisdom of their communities, and were elder went first. Being a) young, b) a woman, and c) a lowly photojournalist, I was dead last. I have never felt so happy to be “last, but not least,” as I was alive and counted. A few days earlier, I wasn’t sure I would be. 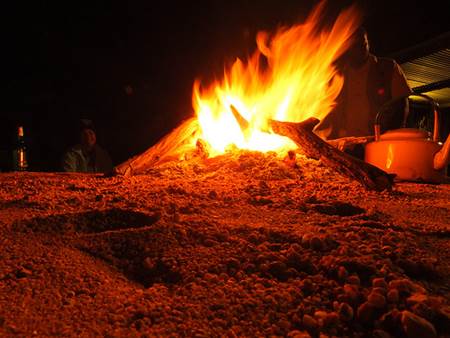 Realizing that I would indeed live another day to tell this tale, I jumped back into my responsibilities of documenting this special trip, knowing that I’d want to do more of this kind of work in the future. It solidified within me my true purpose of being here on earth. Getting to sit around a campfire exchanging cultures with an Australian aboriginal, a Namibian King, a Chief of the Squamish Nation from British Columbia, a representative from the World Wildlife Fund, and a reindeer-herding leader from Sapmi, amongst others, I do believe I am the luckiest woman in the world!

I agree that our Creator oftentimes works in special ways, and on occasion people like me need to be clunked in the head to clearly see the path ahead.

Sometimes there is a singular moment that changes your life. My moment happened in Namibia. I will always remember it as the place where I almost lost my life, but got it back in spades. Namibia will always be known to me as the place of my rebirth. And for this I love her even more.

As I watched the copper-colored leaves and dark bark of the mopani trees pass by the windows while sitting up in the front of the Land Rover with Anthony, I couldn’t help but wipe away a few tears: of joy, of gratefulness, of hunger to live out my passions. My trusted guide let me have this time to myself, to reflect and let it all soak in. Being surrounded by the abundance of life at the Etosha salt pans during the next few days reminded me about how we are all connected: humans, animals, and plants. We are all part of that circle of life. Once the energy is rolling, it never stops, only changes. And, like the Mopane moth that only lives three to four days, we must make the most of our short time on earth. Someone had looked out for me on that day I ate the poisonous bush and decided it wasn’t my time to exit this circle, I’m sure of it. My journey continues, and for this I am thankful.

From a near-death in Namibia to a renewed sense of life (of living!), I eagerly venture out into the world, happy for what awaits me.

Oh, and I now have a strict “Ask first, lick later” policy in place.

Kristen Gill is an adventurous lover of life who seeks to explore and share her travel experiences of remote and off-the-beaten-path destinations. She believes in the slow-travel movement, getting to know the locals and their cultures, and believes it to be a life calling. Always on the go, you might find her roaming the mountains of Bulgaria or enjoying a pint of Guinness in the west of Ireland. More of her writing and photography can be found here.