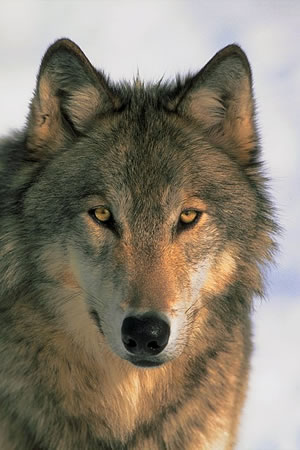 It’s a cold winter day in Yellowstone National Park, and the coyote in front of me is clearly enjoying the spot of sunlight he has found on a hillside, his eyes taking on a dreamy look as if he is nearly asleep. Suddenly his posture changes. His body tenses, his nose lifts and a second later he takes off at a full run, soon disappearing into the woods.

Scarcely a minute later, the reason for his disappearance becomes clear: four large wolves lope out of the darkness of the forest, their gate purposeful. They stand in a row on the hillside and scan the landscape below, the wind ruffling their thick fur and their ears alert.

Even from my observation spot inside a park minibus, the sight of them makes the hair on the back of my neck rise, an involuntary response that seems to come from deep within me. Later that morning, my guide explained my reaction: “We humans have had many thousands of years being prey and only a few being a predator. When we see a wolf, we remember what it’s like to be hunted.”

That moment of instinctive reaction was when I realized how different wolf-watching in the wild was from wolf-watching from the comfort of my living room couch. Over the years I’d seen plenty of nature documentaries on wolves, with their video footage of romping puppies, affectionate family members, and fierce battles between packs. But as fascinating as such footage is, it can’t compare to the visceral thrill that comes only from seeing a wolf in the flesh. For that, you need to come to Yellowstone.

Return of the Wolves
There’s no better place in the world for wolf-watching than Yellowstone National Park, which is home to about 150 of the animals. Wolves were reintroduced to the park in 1995, a program that brought back a predator that had been systematically eradicated in Yellowstone in the first decades of the twentieth century. At the time, wolves were seen as threats to the other animals in the park as well as the cattle beyond its borders. As the years passed, however, park naturalists began to realize that a terrible mistake had been made. By removing the top predator from the Yellowstone ecosystem, the park lacked a key link in its complex web of life. And in some hard-to-define but significant way, the park had also had lost its wildness. 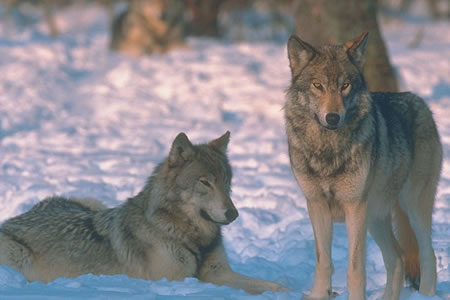 “The reintroduction in 1995 was controversial,” recalls Shauna Baron, a biologist and instructor for the Yellowstone Association Institute. “Armed guards accompanied the animals as they came into the park. Many people were upset about what was being done, particularly local ranchers who feared for the safety of their herds.”

Fifteen years later, the reintroduction has gone far better than most had dared to hope. The Yellowstone wolves have multiplied and thrived, and neighboring ranchers have come to realize that with proper park management, their livelihood is not at risk. Within Yellowstone, the wolves have had a cascade of positive effects on the park’s ecosystem. By killing primarily old and sick elk, wolves have improved the quality of the herd. Grizzly bears benefit from the extra protein they get from carcasses left by wolves. Even the park’s plant life has been affected, as elk that formerly fed on the tender vegetation near rivers and streams now must be more vigilant and stay on higher ground. As a result, more trees and bushes now line waterways in the park, providing additional habitat for other species.

Equally significant has been what can only be described as the star power of wolves.Â  “An estimated $35 million flows into the park and surrounding area each year because of the Yellowstone wolves,” says Baron. “People come from all over the world to see them, and some have even moved to the area just so they can observe them regularly. There’s something about wolves that fascinates people.”

Watching and Learning
Wolf-watching in Yellowstone takes a combination of patience and luck. This past winter, I had two sightings while taking part in a program sponsored by the Yellowstone Association Institute. The first, which began with the flight of the coyote from the hillside, lasted about ten minutes. The wolves had returned to the site of an elk carcass they had killed the day before. As they examined it for any traces of meat left behind, I could hear the rest of the pack howling from the forest, their voices haunting and mysterious on the chill winter air.

While my other sighting was at a greater distance–more than a mile away–it lasted for 90 minutes, giving me a much more leisurely view into the dynamics of what is known as the Druid Peak pack. Through powerful spotting scopes provided by our guide, we watched 13 wolves running, roughhousing, and sleeping. When they finally headed over a ridge and the last wolf left my sight, I felt a sense of loss, for I knew I had been granted an encounter with something rare and precious. 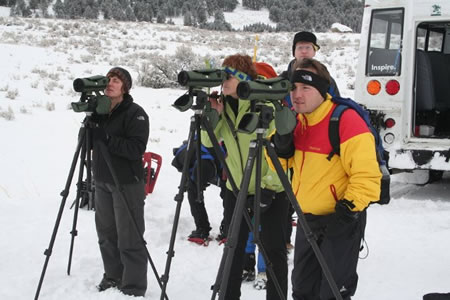 Experiences like these keep drawing visitors to the park, and Yellowstone officials must strike a delicate balance between the public’s insatiable curiosity about wolves and the animals’ safety. “Wolves are naturally scared of humans, and we want to keep them that way, both for their safety and that of visitors,” says Nick Derene, program manager for the Yellowstone Association Institute.

Wildlife biologists say that the Yellowstone wolves have been far more visible than had been expected when they were reintroduced. The animals are tracked through visual observation and through the radio collars that about 20 percent of the wolves wear, making it possible for scientists to learn a great deal about wolf behavior in the wild.

“Up until 1995, almost all wolf observation had been done on caged populations,” says Rick McIntyre, a wildlife biologist who studies wolves in the park. “That’s like someone learning about human behavior by studying the inmates of a maximum security prison. But in Yellowstone we’re able to observe non-captive populations in a way that has revolutionized our understanding of wolf behavior.”

In many ways the return of wolves to Yellowstone marks a revolution as well in how the public views the animals. Western culture is full of myths and stories that demonize wolves, and for much of the history of the United States they were feared and hunted. But gradually another perspective has emerged, one that recognizes that these fierce creatures possess remarkable strengths and intelligence and that they embody the wild in a way no other creature does.

As biologist Rick McIntyre stood with me looking at the Druid Peak Pack on the hillside, he reflected on how much the park’s attitude toward wolves has changed in the past century.Â  “Nearly a hundred years ago, rangers were given the task of shooting the last wolves in Yellowstone,” he said. “And here we are, standing in the same spot where once they stood with guns, only now we’re looking at a pack that’s living completely free. It’s a wonderful thing to see these wolves thrive and realize how much our attitudes towards them have changed.”

Lori Erickson writes about outer and inner journeys for regional and national publications as well as on her website, www.spiritualtravels.info.