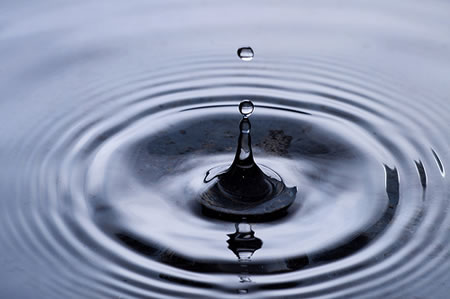 My first crocodile encounter came courtesy of the popular 1980’s Channel Ten mini-series, Return to Eden. Curled up on the couch I watched, terrified, as a woman was thrown into a crocodile-infested Northern Territory river by her husband and mauled within an inch of her life. It was McLeod’s Daughters crossed with Dynasty and it scared me silly.

Living as I did in the south of Australia, away from oversized reptiles, my fears soon gave way to other childhood qualms, such as teachers with bad breath. But just as anxious beach goers still hear the Jaws theme when they tread water, I’m a little uneasy about my next adventure: a canoe trip along the Katherine River.

We’re loading the canoes for three full days and two nights on a 38-kilometre paddle through Top End river country, home to a spectacular accumulation of birds and wildlife, and, I’m told, a croc or two.

The Katherine River springs in Nitmiluk National Park and carves its way through 13 gorges in the Arnhem Land Plateau. It is the main artery through the town of Katherine, an isolated community of about 11,000 people, 317 kilometers south of Darwin. The town serves as a crossroads for travelers driving north to south on the Stuart Highway, 1,117 kilometers from Darwin to Alice Springs, or on the east-west Savannah Way stretching 3,699 kilometers from Cairns to Broome.

Most travelers pile onto tourist boats for a trip to Katherine Gorge, 32 kilometers out of town. We’re sidestepping it, heading the same distance in the opposite direction to a quieter stretch of river where isolation is a promise.

There are just three of us: a fellow writer, Judy, and our tour guide Matt Leigh, a rollie-smoking nature lover with an encyclopedic knowledge of the local birdlife and the same fearless passion for reptiles as the late Steve Irwin. He’s much less of a showman than Irwin but his uniform — the trademark beige safari shirt, shorts and Akubra hat — lands him in a photo or two.

There’ll be no ground support crew or, for that matter, mobile phone coverage so we need to take supplies for three days. Leigh packs his high-sided blue canoe with everything, including the kitchen sink. Judy and I load the airtight front and rear hatches of our smaller kayaks with swags, tents, sleeping bags and a campfire chair — not quite the bare essentials but close to it.

With everything fitting neatly together, I swing a leg over the kayak and plonk my behind into a saddle that feels sturdier than it looks. With a nudge of the paddle against the sandstone banks, we’re off, the current sending us downstream like a trio of dry eucalypt leaves. 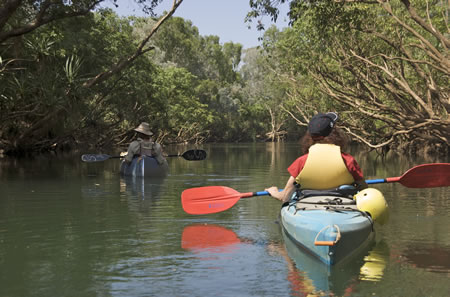 The territory around Katherine is mostly tropical savannah, a landscape of thin-trunked trees, widely spaced, so with the absence of canopies overhead, thick grasses cover the ground. Some tree species have trunks the color of smoked salmon or silvery grey marbling. Others have oddly shaped iridescent green leaves, exotic fruits and knobby oversized nuts, providing a grocery store of indigenous food and medicine.

When the savannah merges with the river the resulting ecosystem is even more beguiling, the waterway a thin artery of unique flora and fauna like a thread of green cotton in a sandpit. Taking a front row seat in this raw, ancient and beautiful place is a coup indeed.

Our first day on the water is an exercise in immersion, getting comfortable in our seats and at ease with the paddle. We practice a back-paddle braking maneuver that doubles as a quick turn, which is essential on any canoe trip.

With the current flowing so freely it would be possible to do this stretch of water in less than half the time. But it is not a race, more an opportunity to tiptoe through the land, dipping our paddles ever so lightly in the clear water so as not send the agile wallabies rushing off in a cloud of yellow dust or the fish darting from view.

As we glide past freshwater mangos, silverleaf paperbarks and palm-like pandanus trees, Leigh reels off the names of the many animals that appear around us: rare herons, black and little pied cormorants, osprey, dollar birds, radjah shelducks and azure kingfishers. The fluorescent orange dragonfly that hitches a ride on my kayak is the scarlet percher. The great screeching din that pierces the silence ahead comes from a hungry gang of velvety flying foxes, denuding the fruit from a copse of trees.

With the river almost at its lowest, we have the pick of beaches for camping. The fine beach sand, smooth as silk underfoot and typical throughout the Arnhem Land escarpment, has gradually eroded from the 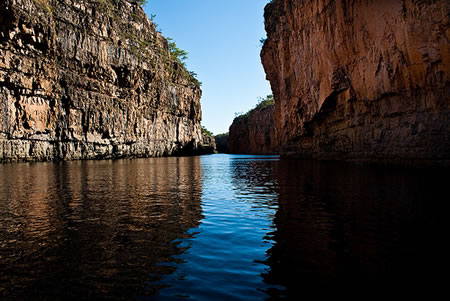 Katherine Gorge and made its way downstream. Snakes don’t like sand, apparently, and the insects keep away too. The only thing to watch for are flying-fox droppings, so we set up our swags under a clear blue sky that will soon be lit by a full moon.

My host, Gecko Canoeing, offers a little more service than other camping tour operators. Despite my early protestations, Leigh insists that setting up our tents (just in case it rains), collecting firewood and cooking dinner is all part of the job. While barramundi sizzles in a frying pan on the open fire and a candle flickers on the dining table, Judy and I are left to stare into the flames.

After dinner, conversation inevitably turns to crocodiles. As it turns out, Return to Eden isn’t the only croc horror show; it’s practically a genre. Movies such as Lake Placid, Rogue and Crocodile along with last year’s thriller, Black Water, based on a true story, have perpetuated fears and myths. The panacea, according to Leigh, is to be armed with the facts.

For starters, it’s dry season when mainly fresh water crocs inhabit the Katherine. Unlike the salt-water variety, “freshies” rarely attack humans. They have a jaw structure that can’t tear prey apart, so they go for smaller creatures, such as wallabies. They’re not territorial like “salties”, so are less aggressive.

In the wet season, when the water level can rise 15 meters, salties make their way down the inland waterways. When the water level drops again, Parks and Wildlife staff remove any crocs that become trapped. The two croc traps we passed earlier in the day are “largely precautionary,” Leigh says. On average, rangers catch just three salties on the Katherine each dry season.

This allays my fears somewhat but I still make a mental note to stick to the sandy shallows and leave the ominous reedy banks to the reptiles. On day two, our pace picks up. This section of the Katherine has a minimal white-water grading but the rapids can be tricky. From a distance the shallow waters appear tranquil but they can conceal rocks and dead tree trunks that transform gentle streams into obstacle courses. One badly timed stroke can overturn the kayak, sending passengers into the river and everything else down stream. I manage to stay upright. 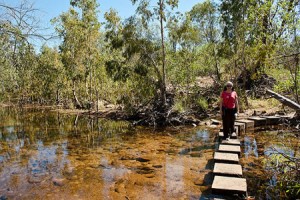 Between each of the rapids, we paddle through large waterholes, eerily deep sections that are cumbersome to traverse after the free-flowing shallows. Either side of us huge red boulders bear black tidemarks that hint at the high water level in wet season.

There is a strange sense of history about these ancient rock formations and a calmness that comes from floating between them. The Wardaman people, the traditional owners of the land that spreads 250 kilometers from Katherine south-west to the Victoria River, knew this stretch of water well. The alternating rapids and water holes figure in their creation story, where ancestral journeys and landscape features intermingle. The Wardaman believe the six sections of rapids form the backbone of a giant goanna that crossed this land at the dawn of time. These big water holes are his footprints.

Despite the bounty of wildlife, some species have been noticeably absent on our trip, one of them the goanna. “Three years ago, guests would almost be guaranteed of seeing a common tree snake, a brown tree snake or a water monitor but not now,” Leigh says. Evidence suggests that goannas along with species of quolls, frogs, snakes, fish, freshies and egrets have become victims of the cane toad invasion, which reached Darwin by 2004. Gecko Canoeing’s eco-accreditation is due largely to its role in monitoring these changes along the river. 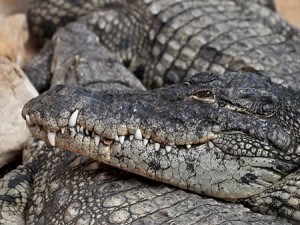 Our final day is magical. We glide across sandy shallows where schools of barramundi and the occasional fresh water stingray skim just below the surface, throwing black shadows across the golden sand. We stick to the river’s edge so as not to run aground on the midstream sandbanks that push further downstream as the dry season continues.

With just more than an hour left to paddle, Leigh finally spots a freshie on the water’s edge. We paddle cautiously over to the bank where a fallen grey eucalypt works as excellent camouflage. I’m expecting a huge beast with beady eyes and a sinister smile. What I see is little more than 60 centimeters long, a critter as cute and as harmless as a lizard. I figure happily that I could probably handle seeing a larger one.

Later in the year, the monsoon rains will come, flooding this country so the narrow and tranquil river transforms into a wide, dangerous funnel of fast flowing water. Such wild and untamed terrain is the rightful habitat of all crocs — both salties and freshies. For five months the unique wilderness will be out of bounds and paddlers will have to wait until next year to return to Eden.

Penny Watson is a freelance journalist and travel writer. She writes for magazines, newspapers and guide books in Australia, Asia and the UK. She currently lives in Hong Kong.