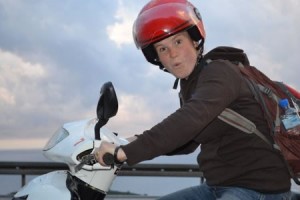 Shortly after moving to Chicago in the summer of 2008, my life, as it felt at that tender time, was in shambles. After signing a lease for a third-floor apartment in Wicker Park, I became an official resident of the Windy City, and consequently exhausted the only item on my post-college life-list.

Each weekday morning, I wrestled myself into business casual, grabbed leftovers out of the fridge, and weaved my way through five miles of construction to arrive at a job that I absolutely detested. Any reprieve normally derived from [Casual] Fridays was cloaked beneath a company polo that managed to simultaneously reach both my knees and my elbows. I was literally swimming in misery.

Liz, my best friend and roommate, was also buckling under the reality of the work world; and, together, we radiated enough self-pity and disillusionment to render apartment 3A inhabitable to sage-burners and optimists alike. Through gritted teeth, we distracted ourselves with survival-themed songs (“I am gonna make it through this year if it kills me.”) and relentlessly pasted our apartment walls with images of better days. Despite our best efforts, social isolation was taking its toll and the results were anything but pretty. Liz sought solace in perma-pajamas and reality television, while I, quite literally, chased down strangers in the name of friendship.

On one particularly pathetic evening, I curled up on the couch and began to compose a life-list with the purpose of peppering my seemingly bleak future with no less than 101 things to do, be, or have before I die. Like moth to flame, Liz sensed something desperate happening in the living room and planted herself next to me. After several minutes of mild pleading, Liz begrudgingly conceded and began to scratch down a goal or two of her own. It is this image — the two of us scheduling our future highs in the midst of our present lows — that came to me while putting money down on a rental moped in Croatia recently.

Needless to say, the dream of “backpacking through Europe” has been gathering dust on my life-list since 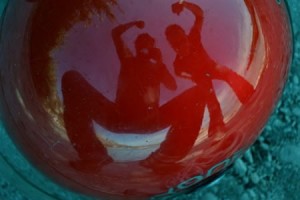 early high school. As a liberal white kid with privilege to boot, this goal is neither surprising nor inventive. In the evolution of kids like me, an oversized backpack and an international plane ticket seems to fall somewhere between a college diploma and a recognizable career path. One sizable tug on the string of foreign adventure, and you’ll send our chins shooting into the air with puppet-show synchronicity. But, as is often the case, no cloud of cliches can stop the sun from shining on the promise of poor choices gone international. It is with this logic that I rationalized the addition of ‘moped rental’ to the list of subcategories that have long accompanied my desire to backpack through Europe.Â  As a result, the thought of traveling abroad has always produced an aerial view image of my little body ripping around foreign territory on two wheels of terror. So, rip I did.

In exchange for a few crumpled Kunas, I received the literal key to my dreams from a man with enough oil in his hair to fuel my moped for weeks. Despite my near inability to hold his jalopy of a scooter upright, this slippery fellow made no attempt to disguise his utter indifference for my physical well-being. Remarkably enough, he remained unamused from the moment I searched for the gas pedal right up to the second I screeched my way into heavy traffic.

Unsurprisingly, our mopeds were loaned to us sans gas. As a born and raised Oregonian, self-service gas stations are anything but home turf; but, with two years of Chicago living under my belt, I like to think that I can get by relatively unscathed. Whitney, on the other hand — quickly tapped into her matador instincts and strutted her way to the gas pump. Before I had even managed to access the tank on my own speed racer, I heard the dreaded words: “We have problem.” Whitney’s lack of grammar had me momentarily confused. Then, the reality of the situation became painfully clear when I heard the same phrase repeated by the portly gas station attendant.

Coming from the same phonetic family as weasel and evil, I have never had a good experience with the word diesel. That trend was not about to change. Fortunately, the twisted snarl of the Croatian employee 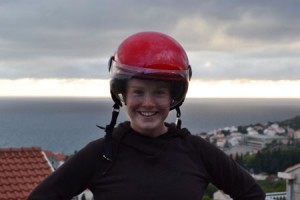 softened with relief as he noted that Whitney had not yet started the contaminated engine of her motorcycle. While I hypothesized the number of monetary figures that this innocent mistake could potentially produce, the gas station attendant called roadside assistance and untangled a blackened plastic hose.

Then, quite literally, came the rain on the parade. To the tune of a giant thunderstorm, I attempted to fill my own motorcycle with gas. Blame it on the weather, but I somehow: a) attempted to open the hood of the motorcycle with my hostel key; and b) momentarily mistook the oil tank for its more gaseous neighbor. Thankfully, I caught these mistakes before subjecting my scooter to any form of misuse.

Unfortunately, the gas station attendant sees all. It didn’t take long for the color of my cheeks to match the deep red of my bobble-head helmet. As if the burn of humiliation wasn’t strong enough, our mechanical man capitalized on this moment of vulnerability by asking where we were from. Having already reaffirmed several stereotypes about our sex, Whitney and I were not about to add our nationality to the mix. “Canada,” we replied.

Twenty painful minutes later, blue skies appeared in tandem with roadside assistance. A slightly more friendly employee of the scooter company teamed up with our gas station guru and, together, siphoned the diesel from the tank and into the roadside drain connecting Dubrovnik’s public waterways. As we pulled 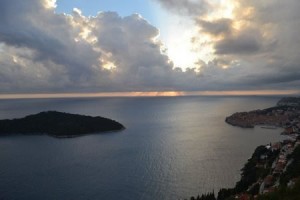 away from the gas station that afternoon, the whip of the wind felt more like a relentless pummeling from the hands of environmentalists, feminists and Canadians alike.

Despite a humbling beginning, the evening held more promise than the afternoon. After finding our scooter-legs, we curled around mountain ridges and glided along the coast of the Adriatic Sea — all amongst the backdrop of a phenomenal sunset. A few dozen kilometers later, I was feeling confident at eighty kilometers an hour, with a smile that could have spanned continents.

Neither speed nor satisfaction slowed the following morning when Whitney and I hopped back on our bikes. We had a full morning of scootering to do, and only an empty gas tank could stop us… twice. From the beginning, it was no secret that our bikes were not only horrendously cheap but also poorly maintained. A failed kickstand [user error acknowledged] sent the handle of Whitney’s scooter straight through the plastic grilleÂ of my bike. One particularly graceless start sent my moped horizontal — a tumble that resulted in the mechanical equivalent of a dislocated shoulder. The most significant problem, however, belonged to the lying eyes of our gas meters. Fortunately, Whitney and I had worked out a highly sophisticated communication system via the “meep meep” of our scooter horns: 1 honk: Turn off your damn blinker; 2 honks: Let this giant parade of cars pass; 3 honks: STOP. 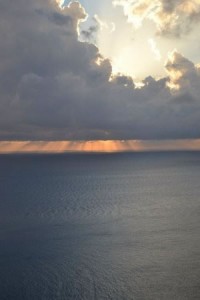 It was with much disappointment that I sounded the wail of three somber horn honks when I discovered that my moped had shut off on a particularly impressive downhill stretch 15 kilometers outside of Dubrovnik. Thanks to the kind and highly confused owner of a small bakery shop, we phoned roadside assistance for the second time in fifteen hours. With a meter boasting a third of a tank of gas, I coasted downhill, side by side with the repairman, his foot guiding my stranded self to the nearest gas station.

It was Whitney’s bike that dealt the biggest blow of betrayal, running out of gas with a meter reading half-full — a cruel deception that nearly knocked the optimist right out of her. For reasons of pride and frustration, both of us agreed that the third time would not be the charm for roadside assistance. Whitney sat seaside while I raced off with a mission suited for cape-wearing and sword-carrying. In reality, I was a small foreigner on a moped equipped with no more than one word of Croatian (Nazdravlje: Cheers!).

In the first fifteen minutes of my quest for gas, I trapped myself in no less than four one-way streets and unsuccessfully Charaded my way through several elaborate scenarios. After finding myself in the mist of obscene gestures involving imaginary tanks and hoses, I cursed the small gas-stationless town and headed in the last direction I was pointed.

After ten minutes of buzzing along at sea level, I turned a bend and spotted a sign for gas. A woman on a moped in Croatia is a curious sight to begin with, but an English-speaking motorcycle maiden is a whole 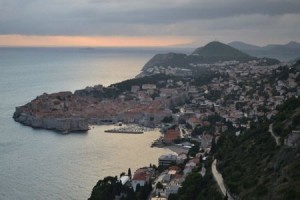 different set of cards. By no means was I in danger… I was just weird. After a lot of pointing and a few broken words (“friend,” “stranded,” “no gas”), the attendant sent me away in confusion. He mentioned something about a different station, a seemingly secret station, just a few meters down the road. So back I went, retracing my tracks, and waving at the small smattering of folks who seemed in the process of recovering from the shock of my earlier appearance.

Right up a gravel road and left down a dirt path, I found a mysterious little gas station operated by a man who had twice the age and half the language proficiency of the previous attendant. To my luck, a patron of this strange establishment understood enough of my ramblings to pull a weathered plastic water jug from the trunk of his car. From there came celebration in the form of fist pumping — an unexpected gesture that fortunately only had two witnesses. I was then directed back to the former gas station for reasons that are still beyond me. The water bottle received two thumbs up from the attendant, and I filled that gallon like it was water in the desert. With enthusiastic waves from my new friend, I placed the jug between my feet, and soared — lurch free — towards Whitney and her dehydrated moped.

On the way back, I couldn’t help but notice the yellow lines on the road beneath me running right through the middle of a fulfilled adventure. Those early days of desperate dreaming in Chicago laid the foundation for my little wheels to turn. In between then and now sits some of the very best days of my young life. More proof, I suppose, that it always, always gets better.

Rumor has it that Greece also rents a mean moped. Wish me luck.

From breast feeding to bar hopping, Shae Healey came of age in the Pacific Northwest, splitting time between Portland, OR and Walla Walla, WA. After graduating from college, Shae spent two years dabbling in Chicago’s social work scene before devoting seven months to international adventuring. Twenty eight countries later, Shae is keepin’ it regional in the great Northwest. To see what grows when women plant their roots in Pacific soil, check out The Flying Salmon for the latest and greatest in estrogen-infused attractions throughout Oregon and Washington.