Home / WanderTales / Adventure / Just Step off the End of the World 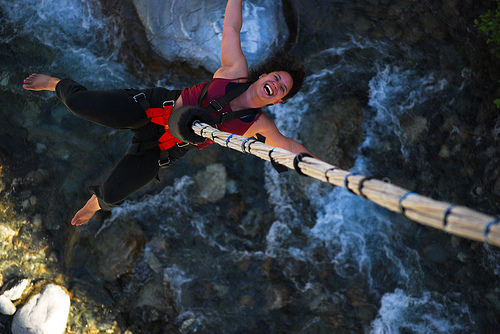 I took the advice of the baby-faced young man with the dentist’s dream smile standing non-chalantly behind the bookstore counter. “If you are going to do anything in this town, make sure it is the Canyon Swing. Just go to the corner at the end of this street and wait for Kamikaze Fred to come by in his van to pick you up.” The young man smirked, started humming the theme song from Scooby Doo, and walked away to attend to a customer.

Unaware and uninformed of exactly what the Canyon Swing was, I waited unconcerned for Kamikaze Fred, casually contemplating the nickname. Within minutes, the screeching of rubber against cement drew my attention to the end of the block where a rusted, paint-chipped, pink flower-power van careened around the corner narrowly missing a fire hydrant.

The driver, pausing slightly only to turn his head to the side and spit, noticed that there was a passenger waiting at the end of the block, and shifted into high gear. The van barreled down the street in my direction without regard for traffic rules, stopping only millimeters from the place I was standing. The back door slid open allowing for a cloud of purple haze to escape.

Kamikaze Fred smiled through his long ZZ Top beard and half-mast eyes, telling me to “Hop in and hold on!” I stepped into the Mystery Machine praying that this would not be a long distance journey. Roaring away from the curb, I furiously rolled the window down and grabbed the door jamb for stability, no longer wondering about the reasons behind the nickname. “Up the mountain!” Kamikaze Fred yelled as if he was cheering the motto of his favorite football team.

The mountain roads were treacherous, winding back and forth, giving me the feeling that I was the ball in a frantic ping pong match. I watched wide-eyed, my knuckles white with terror, as the lane lines on the road blurred into a single paint line. I don’t think I breathed the entire 15 minutes up the mountain. The van finally stopped with a jolt, throwing the door open, and spilling me out the door onto a grassy mountainside. Spitting his farewell, Kamikaze Fred slammed the door and sped off down the mountain. 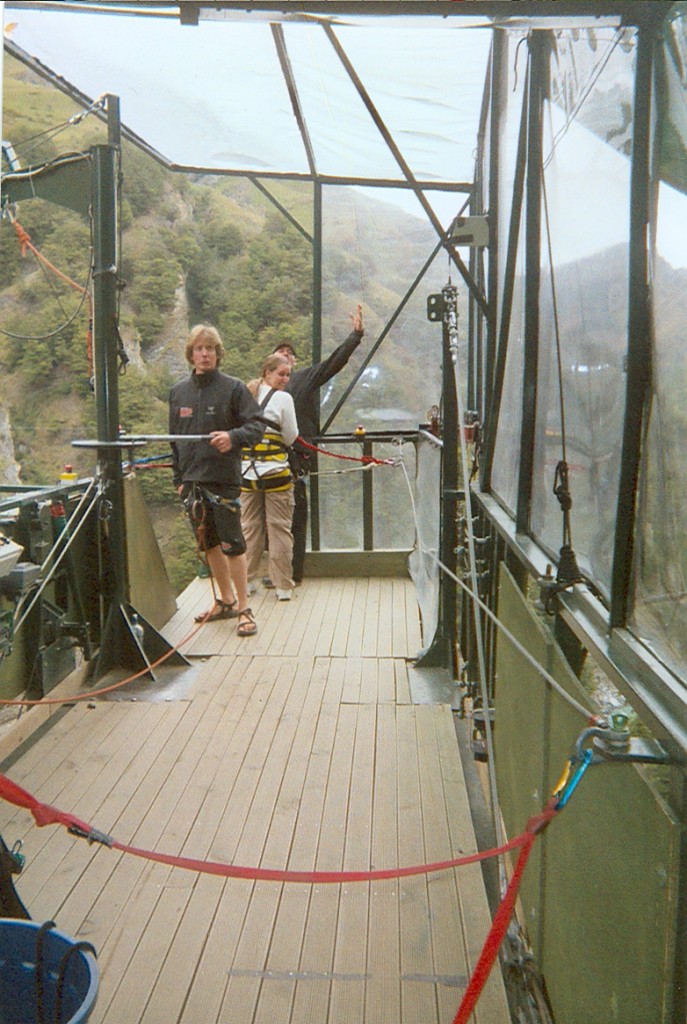 I stood up, pausing a moment to allow the blood to return to my fingertips and ask myself what was I doing here. Two young men approach, their smiles, dripping with charisma, interrupt my thoughts. The taller of the two men greeted me with his thick New Zealand accent, while the other flippantly shook his fist in the direction of the dust clouds left behind by Kamikaze Fred. Assuring me the worst was over, the three of us strolled to a shelter that was likened to an empty 52-foot container with its doors rolled up on both sides, so as to see through it like a rolled up newspaper. The shelter jutted precariously off the side of the mountain, and I still didn’t fully grasp the concept of what I was about to do.

Distracted by the comical antics and coy flirting of the young men, I didn’t question as they snuggly strapped me into a harness. Jasper, the tall one, put his arm around my shoulders and casually walked me to the far side of the container. As we reached the edge, he says “Okay, whenever you’re ready, just step off!”

“WHAT?!” abruptly snapping out of the trance of young lust. With realization and adrenaline flowing through my body, I looked down 850 feet to a rushing river and jagged rocks. “You want me to just step off the side of a cliff?!” My brain was obviously not comprehending the task. Smiling, the young men tried to coax me into the jump, their words of reassurance sounded sincere, but not even Brad Pitt could convince me at this point. Finally, with all their other persuasion techniques spent, Jasper says, “Well, we can’t push you off, so you either jump or go home.”

Faced with the bluntness of this statement, I thought about the reason I travel – my toe slightly moves off the edge… the excitement and adventure of life – my front sole off the edge… the craziness of this story — only my heel touching now… and finally the thought that I didn’t survive the mad trip up this mountain for nothing — I leaped joyously from the edge.

Nothing but awe, no fear, no dropping feeling, just the visual of the shrinking platform, and after a few moments, a slight jolt as the fastening cord became taut swinging me gracefully over the river. I now remember the joy of the swings as a child on the playground.

After being hoisted back up to the platform, I was rejuvenated with new life and asked to do it again. The young men couldn’t believe they were looking at the same person. No fear, just determination. “OK,” they said, “but there are so many ways to make this jump, that you can’t do it the same way twice. You can either spin the wheel of death, or choose the Osama Bin Laden. You’re choice.” Learning from my previous mistake of not asking what I was getting into, I inquired about the Osama. Jasper only said, “We can’t tell you, you just have to trust us.” Nope, I will spin the wheel of death, thank you! 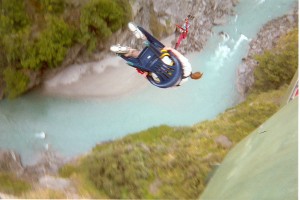 I vigorously spun the wheel, but I couldn’t shake the feeling in the back of my head of being on Wheel of Fortune and having all the spaces be bankrupt. The wheel came slowly to a stop — “THE CHAIR”Â  Moments later, I found myself strapped by a shabby looking seatbelt, reminiscent of an 80’s Volvo, into a plastic chair perched on the shelter’s ledge. My back to the ledge, I was unable to see the ominous drop below. Raising my heels from the ground and pressing my toes into the platform, I managed to push the chair up onto its hind legs. I teeter perfectly on the edge. Not one way or the other, suspended in time. I hear my second grade teacher, Mrs. Correa, yelling to put my chair back on all four legs. I laugh heartily, vibrating my chair and sending me over the edge. End over end I tumbled. What a ride!

All other photos by the author

Tracy Zuliani has traveled to over 30 countries, and visited all 7 continents, but has always called San Pedro, California, home. Among her travels she has fished for Piranha in Brazil, toasted with the Irish on St. Patty’s Day, sampled numerous unique cuisine, dodged the bulls in Spain, trekked the Great Wall in China, and barbequed shrimp with the Aussies.

Tracey celebrates life to the fullest and enjoys the ride! Believing in the thrill, she has skydived, blackwater rafted, glacier hiked, ziplined and more! You can find Tracey playing softball with the Wharfrats, on the golf course, or volunteering at Port sponsored events.