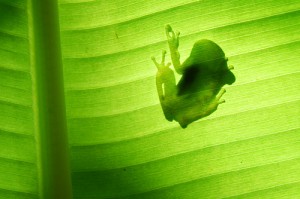 The air was moist and musky and my eyes were glued to the immense green of the rainforest. If it wasn’t for the humming of the Yamaha engine that was pushing the dugout canoe, a cacophony of old and new combined in a practical way, it would have been a perfect moment.

I was sitting like a sultan among bags, backpacks and banana bunches with four Huaorani. I had just spent two weeks in Bameno, the farthest and most traditional Huaorani community in the depth of the Amazon jungle of Ecuador. The Huaorani are fierce warriors of the rainforest, who still live as hunter-gatherers. They take care of ‘ome’, the forest, and in exchange she watches that they get everything they need — food, clothes and shelter. It is a beautiful relationship, one of deep love and care, a symbiosis of man and nature.

I was sad. I was coming out of a primordial dream, a pure place of lush forests, wild animals and man living in harmony with nature. There was no contamination of the soul. It was a world depleted of ambition, vanity and rush to amass material possessions. To me, that was paradise on earth, a tough paradise, where every day was a struggle to survive, a beautiful but essential struggle of man with nature.

The voyage to the outside world would take almost 24 hours on the river. We left Bameno in the middle of the night. The families of my friends Mintaka, her husband Tega, and his two cousins Kemi and Dabo accompanied us with torches and candle lights to the river in a silent procession. Kemi started the motor and we slithered away on the black silk of the water into the darkness of the forest. At the crack of dawn, the murky air turned milky blue, while the forest put on a vibrant navy color. The moon was crispy white. As the sun was pushing away the night, the forest woke up. Howler monkeys made unearthly sounds that tore through the eerie silence; then birds started chirping and insects buzzing. The forest was shaking its inhabitants back to life.

I foresaw a quiet day, sliding in the dugout canoe through scenery that took me back to the beginning of 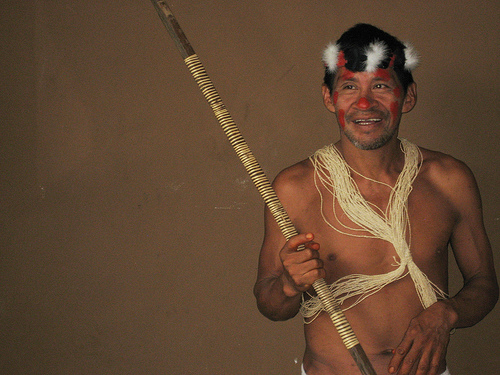 time. As the sun became stronger, the heat became unbearable and Kemi stopped the boat so that we could all bathe in the lukewarm coffee waters of Cononaco River.

Mintaka served us lunch on a sandy beach, where we drank the chicha she had made a couple of days before: she boiled yucca roots, made them pure, masticated the paste then spat it back in the bowl. It sounds disgusting, more so that I had witnessed the chewing and spitting, but chicha is a nourishing drink with a yogurt-like taste that fills the stomach for the whole day. While Kemi and Debo were picking avocado fruits off a fallen tree, Mintaka mixed the white paste with the water Tega brought from the river. I knew that river water plus local spit was beyond all rules of hygiene, but I was hungry so I drank the thick milky soup from the bowl. Hygiene aside, it was refreshing and filling.

About one hour after lunch, Kemi stopped the engine. I saw Mintaka, Tega, and Dabo sniffing the air, speaking fast among themselves in Huao Terero, their language. Although I could not hear or smell a thing, I knew my friends sensed animals nearby in the rainforest, by the way their attitude changed. “Do you want to see wangana?” Mintaka asked me.

Tega and Debo were searching for a weapon and Kemi was silently pulling the canoe next to the steep muddy shore. I smiled widely thinking that an encounter with wild boars would be a nice closure to my trip. “Let’s go”.

The forest started above a vertical mud wall. I barely blinked, that the Huaorani had already disappeared beyond the green curtain of vegetation. I scrambled up the bank and stumbled into the jungle trying to make as little noise as possible.

I entered the thickness of the forest illuminated by a soft dim light with green and golden highlights. I smelled rotting leaves and wet bark. The four Huaorani were 10 feet ahead, gesturing with their hands. I still did not hear or smell a thing, even though I tried hard to wake up my primary senses, buried away by city life.

Tega looked at me and signaled to follow. The Huaorani were advancing swiftly and smoothly through the intricate network of roots, snaking masterfully through bushes and low branches. Every now and then they 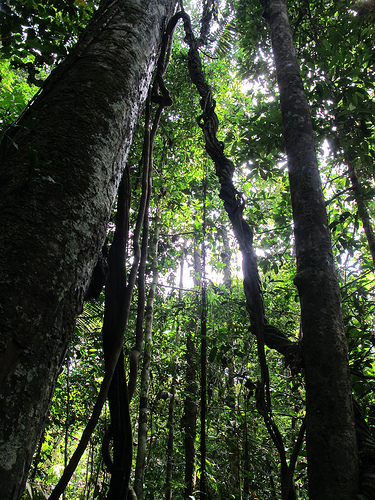 stopped and listened, raising their heads to sniff the air. I watched them in awe, turning from humans into hunting machines. The primeval instincts kicked in the moment they sensed the prey. Food was survival, and my friends were in survival mode.

Kemi stepped aside into a thicket of bamboo and with the only knife we had in the boat he chopped a bamboo spear in literally three moves. I looked around and realized I had no sense of where I was. If I were to go back where we came from, I would not know the direction of the river. If I did not want to get lost, I had to stick with the group, who at this point were almost running.

Concentrating on keeping up with the Huaorani, I hit my toes hard on a root that was sticking out of the rotting leaves. It was then I realized I was barefoot in the middle of the jungle. For one split second I panicked thinking of all the dangers I was facing — deep cuts from six-inch thorns of fallen chambira trunks, poisonous plants and insects crawling under my feet, but most terrifying of all, snakes.

I blocked these thoughts immediately and focused on running. Adrenaline was rushing through my veins as I was racing through the primeval rainforest in a reenactment of a prehistoric act. The Huaorani stopped and for the first time I heard clear grunts. My friends seemed liked superhuman warriors getting ready to attack. Every muscle in their toned bodies was tense and ready to spring into action. Their senses were at their highest, as they advanced graciously, slowly, silently with feline moves. I had a feeling they could magically transform into fierce jaguars and charge ahead.

The moment was surreal, beautiful, intense. We advanced a few more feet, until a strong pungent smell hit my nostrils and I felt I was going to throw up. I took a deep breath and barely recomposed. Dabo pointed ahead beyond a thicket of bushes. There they were, big dark shadows snorting and digging the soil with their big snouts, a whole pack of wangana — wild boars.

The Huaorani were trembling with excitement. Their bodies contracted like springs ready to launch. A few wangana stopped scavenging and raised their heads. Prey and hunters were sniffing each other. The 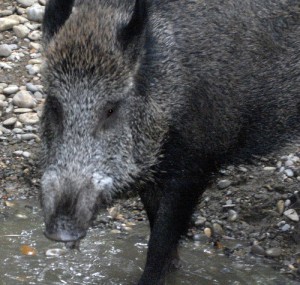 Huaorani exchanged a few looks and Dabo turned and said swiftly, “Do not be afraid.” Then wham! They charged towards the pack.

I found myself standing alone, barefoot and ankle high in dugout soil and pig feces, a dizzying smell unpleasantly tickling my nostrils. I heard a terrible noise, a mix of growls, squeaks and screams. The boars saw the Huaorani and started to run… towards me. I stood like a deer in the headlights watching how 40 crazy boars were getting closer. I suddenly remembered all the stories I heard where the boars attacked, bit and even killed hunters. My eyes grew bigger and my knees weaker as the stampede came just feet away. For a second I thought the charging boars would be the last image imprinted on my retina.

Suddenly the pack split in two and dashed around me like gushing water deflects around big boulders. It was silence again and I stood bewildered in the stinky air, still feeling on my skin the breeze of the boars running past by me.

I was alone in the jungle. The Huaorani were nowhere in sight. The boars were behind and the big wild forest was all around me. I started to scream hoping my friends would hear me, “Donde estaaaaan… no me dejen solaaaaaa!”

I should have panicked but instead I felt a weird pleasure of being in a strange situation. I felt adventurous, but I was probably just high from the adrenaline that was foaming through my veins. After what seemed an eternity, I distinguished a blue spot among the green leafage. “Daboooo!” I yelled with relief.

Dabo and Tega came in sight, followed by Mintaka and Kemi. They were panting and talking in their 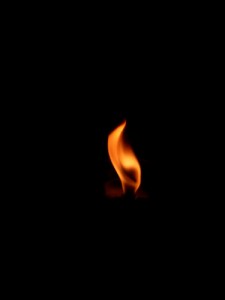 language. From the many gestures and the few words I knew, I learned that Kemi hit a wangana with the spear but its skin was too thick and the spear too blunt to go through. Tega had to jump in a tree to avoid collision with a fierce boar and Dabo chased a baby boar which he caught for a few seconds, after which the animal escaped. I told my story with equal excitement and I was proud to fit well in the group.

Back in the boat we had a long conversation about the hunt and that was all we discussed for the hours to come. I was amused at the enthusiasm of my friends, counting and recounting every detail of their actions.

Night fell and stars lit up the sky one by one. I was coming closer to the end of my trip. I was drifting out of a beautiful dream. When I saw a big orange flame shooting towards the star-filled sky, I knew it was over. It was the oil refinery on the Via Texaco road. The light brought tears to my eyes and woke me up to reality.

Huaorani torches lit up the beginning of my journey, and here, at the end of my dream, at the border between fairytale and reality, I was welcomed by oil flames biting mercilessly into the pure Amazon night.