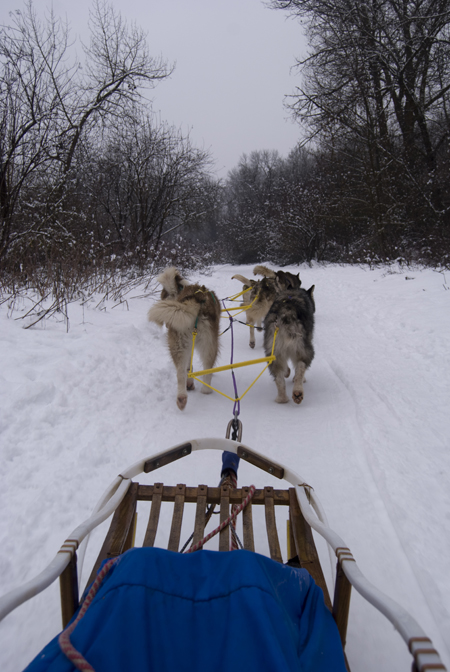 I’m standing in a snow-filled clearing in central Washington watching as one dog’s bark becomes a fervor, spreading until 20 plus dogs are howling, whining and tugging on leashes, clawing excitedly at the snow. Across the clearing two sleds are anchored — eight dogs are harnessed to one, seven to the other — and each time someone begins to walk toward a sled, the howling grows louder and more frenetic. Today we’re going dog sledding and it’s very, very clear the teams are just itching to run.

For more than 6,000 years dog sledding was done by the Mahlemiut Eskimos of northern Alaska and the Chuckchi people of northeastern Siberia. The Mahlemiut used the Alaskan Malamute for hauling food to villages and the Chuckchi employed the Siberian Husky for pulling loads or herding reindeer among other responsibilities. Many of the native communities in northern Alaska still rely on dog sled teams for transportation and its modern adaptation into the sport of racing has spread as far as Northern Europe, U.K. and Japan. The breed of dogs used has also expanded to include even the Standard Poodle who competed from 1988 to 1991 in the famous Iditarod. Today, the teams we’re running are comprised of Malamutes, Huskies and Hokkaidokens.

Gingerly I step over the railings, slide into the cargo bed and zip myself in. It’s me and my musher, Tim, on this run. I can’t help but think ‘I’m the cargo’ but the bed is surprisingly comfy and, in the thick waterproof canvas, I start to warm up. Tim grabs the anchor, places it in my lap and steps onto the runners with a curt shout: “Hike up!”

“Hike up!” Not “Mush!” It’s a common misconception, thank you Jack London, that the term mush is like saying giddyup to a horse when, in fact, its pronunciation is useless to dog ears. It’s too soft. Instead, ‘Hike up!’ gets the teams moving. The term mush originates from the French word marche meaning ‘to march.’ During the gold rush anyone traveling north was a musher, no matter their method, but the name stuck with those who traveled by dog sled and fed their dogs “mush.” Hence why my driver, Tim, is a musher.

Our team of eight have already anticipated his call and we begin to cover ground at a jogger’s pace. Sled dogs are known for two things, endurance and speed. Tim tells me the team I’m traveling with has been clocked at close to 20 miles per hour but they’re a recreational team and not used to holding speeds for extended periods. Racing dogs can clock an average of 20 mph for up to 25 miles but over longer distances the average speed drops to about 14 mph. Tim calls ‘Hike up!’ to the team twice more and with each shout their pace increases until I feel a noticeable breeze hitting my face. The path ahead is straight but I can feel Tim’s weight shifting subtly on the rails below me to either keep in line with the wheel dogs or find the smoothest areas of the trail — probably both. Ahead, it’s obvious the dogs are thrilled.

The team keeps this pace until a bend appears in the trail ahead. “Easy!” Tim calls out. Slowing somewhat the lead dog maintains the middle of the trail and the sled begins to swing to the outside. To counteract, Tim shifts his weight into the inside of the corner and the sled straightens, gliding cleanly through. The motion reminds me of countless hours riding a toboggan through the snow behind my parent’s truck. 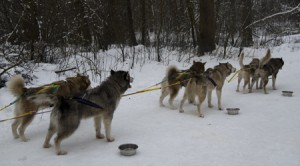 Constructing a Sled
Though materials have changed from bone, sinew and rawhide to plastics, carbon fiber and Kevlar, modern dog sleds aren’t much different from their traditional predecessors. Two basic types of sled are in use today: The basket sled features a woven cargo bed raised approximately six inches off runners to prevent basket drag on fresh powder; and the toboggan sled which consists of a thick, solid plastic sheet acting as the cargo bed and attached directly to the top of the runners. Typically used in races such as the Iditarod, the toboggan sled’s lower center of gravity helps it float atop deep, unpacked snow. A hybrid style does exist, which we’re running today: a raised toboggan which has a solid plastic bed suspended around four inches above the runners.

All sleds consist of six major components — the primary being the runners and the cargo bed. Runners are the skis that slide along the snow and the cargo bed carries the load atop the runners. At the front of the cargo bed a brushbow acts as a sort of bumper, semi-circular in shape, which deflects brush. A handlebar for the musher is attached behind the cargo bed and footboards are mounted on the back ends of the runners. This is where the musher stands. Finally, a brake is attached to the back of the cargo bed. It’s an aluminum or steel u-shaped bar which, when stepped on, drops two metal claws into the snow to stop or slow the team. Most sleds have a few other items: A snow hook — a metal anchor that is angled to dig deeper into the snow if, say, an excited team suddenly takes off; and a track or drag — a rubber mat that, placed between the runners, acts as a second braking mechanism and applies more uniform resistance than the claws. 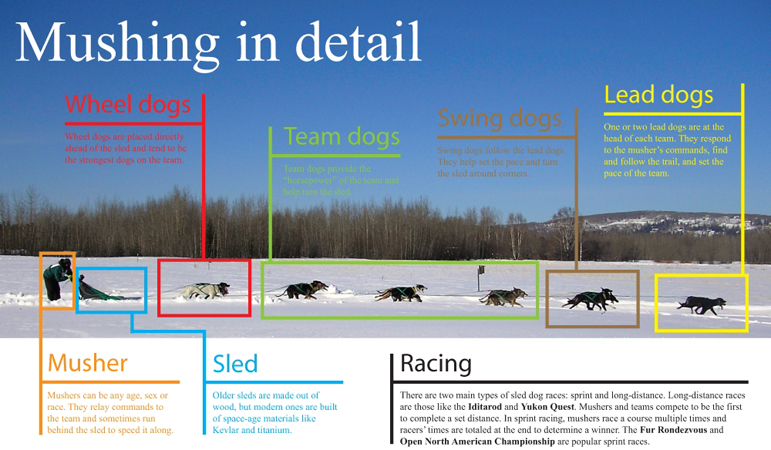 Sled teams are selected and assembled with great care and training usually begins when the dogs are around six months old. The number of dogs that comprise a team varies from just two to upwards of 22 but they’re divided into four roles. At the front are the lead dogs. As the term implies, they set the pace and follow the musher’s commands. Swing dogs travel directly behind the leaders, helping to maintain the pace and aiding in turning the team. Team dogs, next in line, are the horsepower and have the simple task of “follow that tail!” Wheel dogs are the two directly in front of the sled. They assist in steering the sled itself and initiating that first tug to get a stationary sled moving. It’s best for a team if each dog is capable of switching positions, though not all dogs are the powerhouse needed to get a sled moving and not all dogs want to run in front. Of course, the final member of the team is the sled’s driver, the musher.

Dogs are harnessed to the sled using a system called a towline which is composed of five major parts: Starting at the sled, a shock cord — or bungee — is placed between the sled and the towline. If the sled stops suddenly, it absorbs the impact and prevents it from jarring the dogs. The shock cord is connected to a mainline which runs the length of the team to the leader. Each dog’s body harness is connected to the mainline by a tugline. This works in tandem with a neckline which connects a dog’s collar to the mainline. The tugline and the neckline form a triangle of sorts and necklines keep a dog from going the wrong way around an obstacle. The mainline ends at the swing dogs’ necklines. From there, two distinct tuglines connect the leaders who drive without necklines. 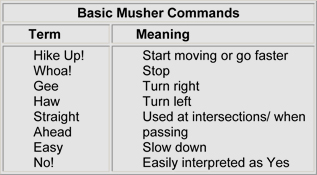 Haw and Gee!
Sleds perform effortlessly on straight, flat trails. But no steering system exists for corners as I quickly learned. Instead, the musher leans from side to side, taking care to lean into the corners as sleds tend to slip to the outside. The brake and track also assist — by applying the brake or stepping onto a track, the sled slows and is pulled to the inside of a turn. Understandable, though not obvious at first, the more strain placed on the dogs, the more control a musher has over the sled. Breaking while descending a hill maintains resistance, keeping the team and sled under control.

From this angle, tucked snugly into the bed bag, resting just six inches off the ground, the forest whips by and the running of the dogs takes on a wave-like rhythm. Their earthy, wet scent mixes with pine and fresh snow and the runners settle into a quiet shhhh skimming along the trail. I’m sure, if my musher looked down, he’d see a smile of bliss creeping at the corners of my mouth.

Where to Find Dog Sledding in Washington

Photo Credit: Mushing in detail by JKBrooks85
All other images by the author

Jonna Bell, a Northwest native and inquisitive explorer, captures herÂ adventures in photos and stories on her blog, Vas-y Fille. Her experiences, notes and research inspire and encourage the desire to be curiousÂ within us all. She can be tracked down and followed at the Vas-y Fille website, as well as on Twitter and Tumblr.