Home / WanderTales / Adventure / Buck Creek Ridge: Where the Epiphanies Are as Plentiful as Wildflowers 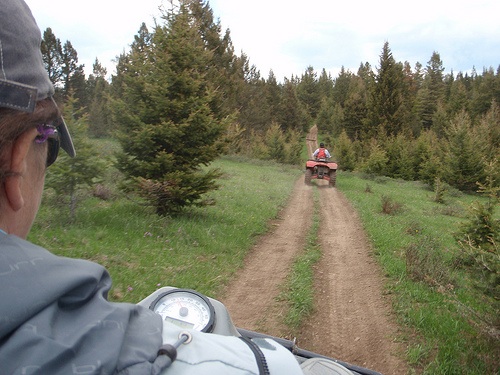 I thought driving an ATV was going to be like driving a golf cart. Not that I’ve ever driven a golf cart, but when I plunked down several hundred dollars just outside Big Sky, Montana for my 16-year-old son Ben and me to ride, I had in my head vague images of a Mrs. Arnold Palmer in nicely pressed slacks and a halter top. I did not think that what we were about to do was athletic. I was not up for athletics. At age 56 I still run, ski, mountain bike, and scuba dive. Usually. But I was only three months post-op on major shoulder surgery. So signing up for a golf-cart-like ride seemed like a pleasant way to get outside with my son, who was itching to do something fun after our visit to the Montana State University campus in Bozeman.

I should have caught on right away that nothing resembling a gentle spin on four easily controlled wheels was in my near future. After all, when the woman behind the counter pushed a map in my direction, she mumbled something about the 9000-foot ridge.Â Â She wasn’t talking 9000 feetÂ long. Now I know.

And now I also know what “eat my dust” means. Ben, you see, is a hot-rodder. He rides dirt bikes back home in Vermont, and he drives them fast–just like he drives an ATV. In the parking lot, he gave me a quick explanation about standing up on a four-wheeler being a better strategy than sitting, and then he tore off down (up, actually;Â wayÂ up) the dirt road, leaving a cloud in his wake. Which meant that, catching up with him, the full, trembling 5′ 7″ of me was breathing in massive amounts of particulates.

But stand I willingly did; my legs were the main shock absorbers on the ATV, as far as I could tell.

At first the road was only dusty. A golf cart might actually have handled it. But quickly it became gravelly, after which it became tremendously rocky and steep. Sometimes, keeping the ATV from rolling over on me required all of my strength. Earlier that same week, after visiting the University of British Columbia in Vancouver, I had opted out of paragliding because I thought it too dangerous. Towards the end of my four-hour tussle with an ATV I realized that at almost any point on that ride I might have been safer suspended under a flimsy piece of silk 4,000 feet above the earth.

Still, I’d do it again in a Montana minute, for on the ride up the ridge that 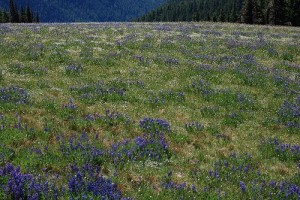 day I saw beauty that will forever defy my attempts to describe it. The sky was unsparing with glory. And the wildflowers! They surprised me everywhere I looked–as did sun-drenched life lessons and metaphors. They leaped out at me, those unexpected moments of understanding, from behind discarded elk horns, from underneath the bubbles in mountain streams, from behind cotton-puff clouds, and even from the scat of wild animals that had eaten near the trail. The epiphanies were at least as humbling as Buck Creek Ridge itself.

Here are some of the things I learned that day: 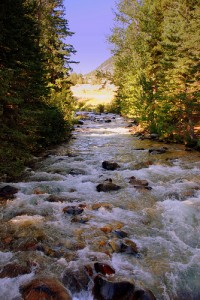 -Â Â  Â In some situations, the 20 years of experience I have as a mother just mucks things up. Riding an ATV is one such situation. I must never again try to gently guide my ATV along, teaching it as I learn from it, hoping to understand what it has in mind for its path through life. That sucker just needs to be steered.

-Â Â  Â There is no shrine to the Virgin Mary on the road up Buck Creek Ridge. That is deadwood I saw–deadwood surrounded by alpine lupines. I must remember to drink more water before I exhaust myself so that I don’t imagine things.

-Â Â  Â When my son waves hello to me from up the road, no matter how happy and relieved I am to see him I should not take one hand off the handlebars to wave jauntily back, else I quickly end up in the alpine lupines.

-Â Â  Â When a teenager flaunts his (or, for that matter, her) physical prowess in front of me, I should let that kid rideÂ wayÂ ahead. We’re both safer out of each other’s sight.

-Â Â  Â A general rule for after an ATV ride:Â Â If you can’t lift the arm attached to a post-op shoulder more than a few degrees, you shouldn’t panic and call the surgeon. Instead, Â check the other arm. Probably can’t lift it, either.

-Â Â  Â ATV-ing is like life as a woman. It’s a rocky, hard, overwhelming ride on the uphill. Ditto for the downhill. That, and the downhill goes by faster.

Rebecca Coffey’s short fiction has appeared inÂ McSweeney’s,Â The Rumpus,Â The Revolving Floor, and elsewhere. She is a commentator onÂ Vermont Public Radio, an award-winningÂ documentary filmmaker, and her bookÂ Unspeakable Truths and Happy Endings was cited as an Outstanding Academic Book by the American Library Association’sÂ Choice magazine.