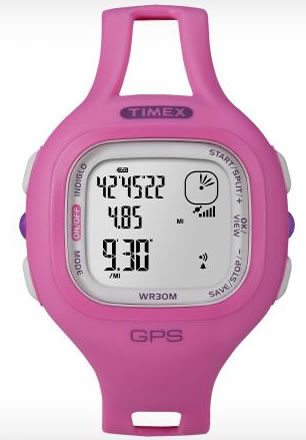 No, I’m not physically (or mentally) prepared for a marathon, yet. But I am technologically :-).

Actually, my interest in wanting to test out the Timex Marathon GPS was far simpler than wanting to run a marathon. I took up running so that I’d have a way to exercise when I travel. But the issue, I quickly discovered, was that when running in a new location, I haven’t a clue how far I’ve gone. I was using a watch to clock my time, but that wasn’t telling me distance.

The Marathon GPS does just that.

In its simplest use, this watch allows me to sync up with a satellite to track my location and then time myself. At the end of the run, it provides me with both distance and time.

I tested its accuracy at home by using it on my regular running route. According to Google Maps, my run is 2.8 miles. With the Marathon GPS, it clocks me at 2.76 (which makes total sense since Google Maps is likely calculating based on a car driving in the road, and I’m on sidewalks). So, yeah, I trust its tracking ability.

The other function that sold me on this was the ability to calculate my split laps. Simply put, I know what time I should be clocking at specific points along my run. This watch allows me to hit a button to note the time. I can then save all the data and go back and compare how I’m doing.

In terms of ease-of-use, the Marathon GPS does pretty well as far as being intuitive. It’s a somewhat complicated watch in that, yes, it tells time but it also includes the stopwatch, estimates calories burned (note it will only do this when when the GPS is turned on) and can store all that data.

It was a tad bit frustrating for me at first to learn what all the buttons were and, still, after about six weeks of use, I still have to give some thought on occasion as to which buttons stop, start and track my laps. But it’s relatively powerful (meaning lots of options) compared to other health watches I’ve owned.

I was initially concerned that the GPS was going to consume a lot of battery life and that I’d have to recharge the watch every few days. But the GPS turns off automatically after 15 minutes of non-use so it’s not eating up battery life. And each time I use it, it shows the amount of battery life left so I have a good sense of when it needs to be recharged. I can easily run for two weeks (an average of eight runs) before I’m down to about 20% battery life and feel the need to recharge.

All in all, I’d recommend the the Timex Marathon GPS watch for traveling athletes. It’s worked well here in Berlin and I’m eager to test it out in Bhutan (where I’ve had problems getting other GPS items to connect to satellites). At the very least I will be able to track my time and split laps for repeat runs.

Available for about $100 on Amazon, the cost is definitely in line with other exercise watches and gear with similar functionality.

Previous Post: « Staycation ~ Your Passport to Portland
Next Post: On Traveling: How to Choose Clothes for Packing Light »