Looking back, it’s a little embarrassing to think about the sleeping pad I brought with me on the Snowman Trek last year. It was a pad I had used many times while car camping in the Pacific Northwest and it had served me well. It was one of those large inflatable pads that you can buy at an Army/Navy store.

It worked well, but the part that I kick myself about is how much precious space it took up in my duffel bag.

Fast forward a few months. When I was walking around the convention center floor at the Outdoor Retailer Show earlier this year, I passed by the booth for Klymit. What caught my eye were the unique designs of their sleeping pads. When I looked closer, I realized these sleeping pads could squeeze down to a fraction of the size of my Army/Navy store inflatable pad.

I’ll be heading back to Bhutan next year for the Snowman Trek and no doubt a Klymit is coming with me. To test it out, I took the Klymit V2 Sleeping Pad to Papua New Guinea with me last month since I knew I’d be sleeping on the floor of a homestay. I figured that extra padding might come in handy. 🙂 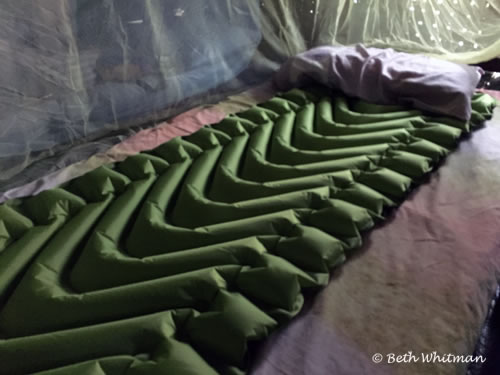 We slept under mosquito nets which you can see in the photo at right. The first night I slept on the thin pad that was provided to me by our hosts but then I used the Klymit on the second night. The difference? I definitely had more cushioning underneath me with the pad and I appreciated that. Overall I’d say it was more comfortable with those extra air pockets. But it’s hard to say whether I slept any better since 11 of us slept in the same big room and I don’t think anyone slept well!

Seriously though. I can say I was pretty comfortable on the cushy Klymit. (It looks comfortable, doesn’t it?) You’ll notice in the photo that it’s designed so your body lies in the middle with “rails” on the side so you’re not so likely to roll off of it.

It weighs just about a pound which is not much compared to other pads AND compared to the amount of comfort it will provide if you’re camping in a tent or out under the stars.

For hardcore backpackers and climbers who are need even lighter gear than this, Klymit has other styles that pack down even smaller than the V2 Sleeping Pad. I won’t need anything smaller than this, however, so it will suit me well.

The only slight downside to me sleeping on the Klymit pad in PNG was that, compared to the provided sleeping pad, it was a little noisy. I felt like I was squeaking a bit every time I moved around. Imagine the noise an inflated balloon makes when you rub it. That’s kinda how this sounded. That, however, will NOT dissuade me from bringing it trekking in the future.

The Klymit V2 Sleeping Pad is available on Amazon.

Disclosure: Klymit provided the V2 Sleeping Pad to me for review. Regardless, everything I have said in the post reflects my honest opinions.