When I first scheduled the itinerary for the Bhutan Laya Trek, I never dreamed that such an exciting event as the King’s wedding would happen during the tour. While I joked that the itinerary may or may not include a bit of of royal festivities, meeting the King and the (new) Queen wasn’t event a blip on my radar. But meet him we did.

The day after the Royal couple tied the knot at the Punakha Dzong, they made their way to Thimphu, normally a couple of hours’ drive away. On this day, however, they spent the entire day driving short distances and greeting the people who lined the road along the way, including our group.

Because no photos are allowed to be taken of the King other than by His Majesty’s (HM, as the locals call him) own photographer, the closest I came was of the altar above featuring offerings and the posed photo of the newlyweds. 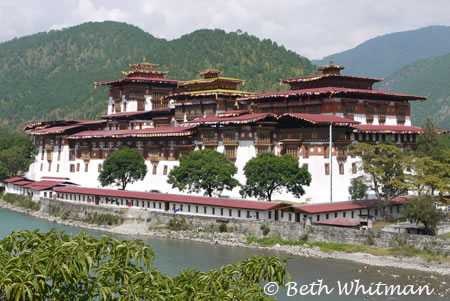 During the ceremony, the Punakha Dzong, which is already the most beautiful monastery in Bhutan, was specially lovely as it was decorated with prayer flags along the roof.

While the trek was amazing, I’d have to say the highlight of the tour might have been meeting HM 🙂