For over 200 years families in the village of Guaitil have been making Costa Rican pottery. The indigenous Chorotega people have long ago lost their language and been absorbed into the general population of Costa Rica but you can still find traces of their culture in the pottery still being made in traditional ways as it has for over 800 years. The pots are hand thrown and decorated with glazes from minerals found in the area then fired in wood burning kilns. Studios and galleries exist in most of the homes in Guaitil. During my visit in January, I spent a few hours with artisans at Willy’s Pottery where I learned more about their traditions. Willy’s family have been potters for six generations. 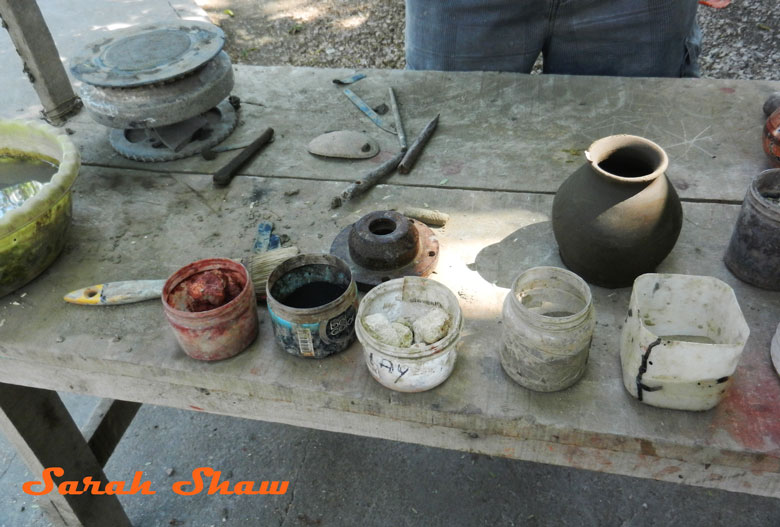 Found in the province of Guanacaste in the scenic northwest of Costa Rica, Guaitil is home to about 50 families carrying on their Chorotegan traditions. Clay is harvested from the nearby mountains and mixed with iguana sand from the beach at a ratio of 2:1. Water is added and the mixture is left to sit for two hours. Hand throwing a pot is still a simple process with clay being turned manually on a wheel rotating on an axle and built up using the coil method. Tools are simple too. Aside from their hands,  potters use a corn cob, a piece of a shell from a gourd, a scrap of rubber, a knife, a few wood sticks and a wire for cutting the completed piece from the wheel. Join me as the owner of this studio, Willy Villafuerte Ramirez, demonstrates how he creates a pot. 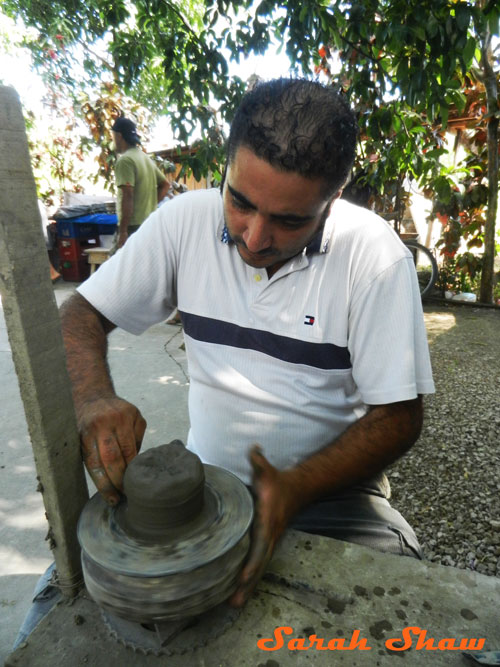 First Willy begins by placing a lump of clay on his wheel. He approximates the amount of clay he will need to create the base of the pot he is making. He spins the wheel along the side with one hand while his other hand begins to roughly shape the bottom of the pot he is creating. Years of making pots have given him the instinct to know where to begin and to see where he will end. 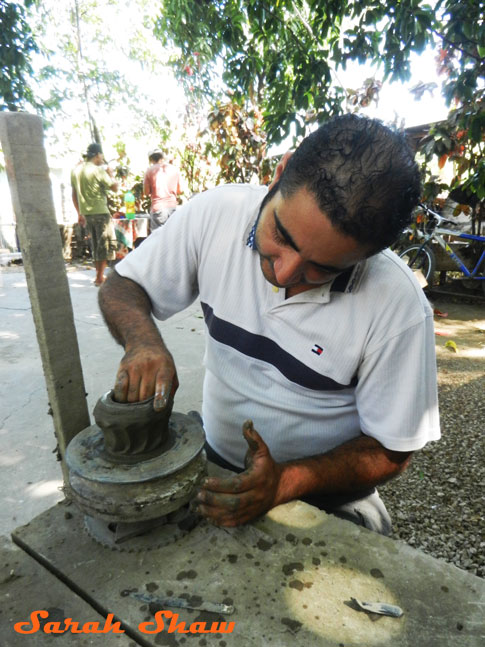 He inserts his fingers into the center of the mound of clay to begin to hollow out the pot as well as pulling the extra clay upwards to add height to the piece. His left hand continues to spin the wheel so that centrifugal force adds in the creation of his newest pot. 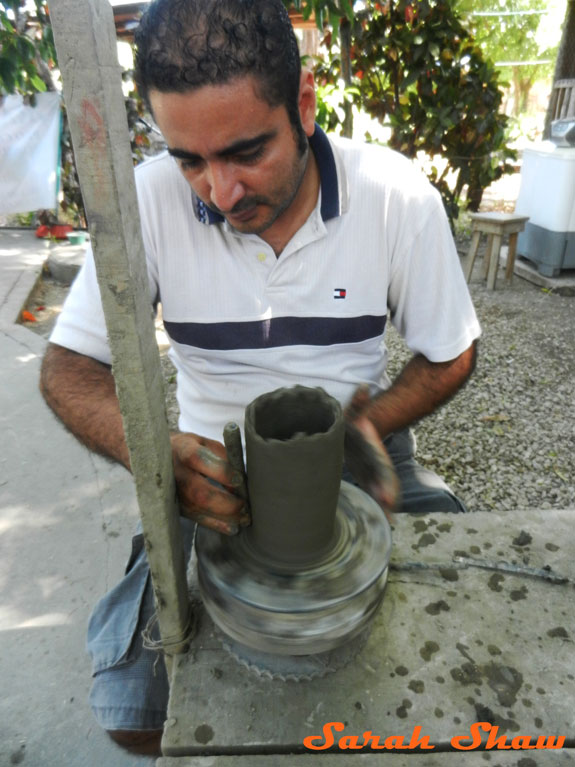 As the pot continues to gain in height, Willy uses a corn cob to help smooth the exterior of the pot. He is also making sure that the pot is the same thickness all the way around and from top to bottom. This is important because you don’t want you pottery to have a weak spot or side. It will also help the pot dry uniformly as a thicker area would take longer to dry than a thinner side. 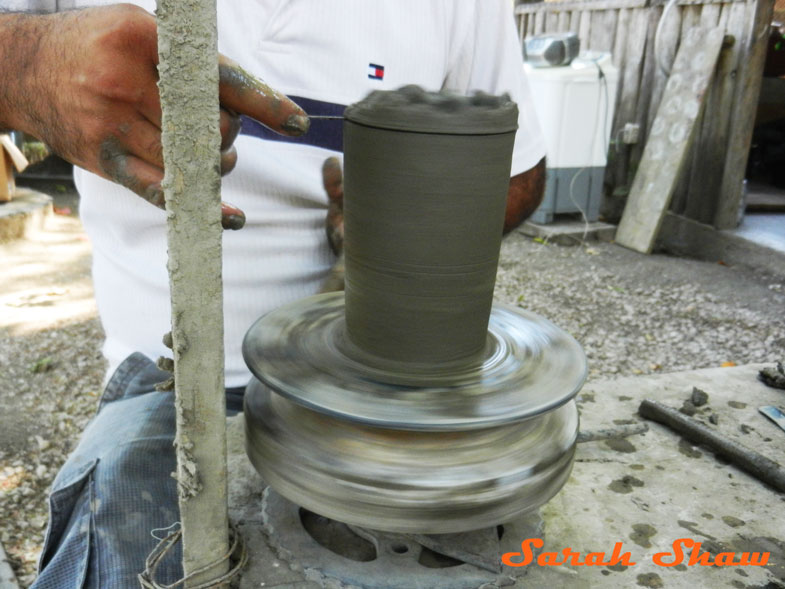 Next he uses a file to cut off the uneven edge at the top. By holding the hard tool against the soft clay and spinning his wheel, he is easily able to create a uniform edge along the top of his pot. 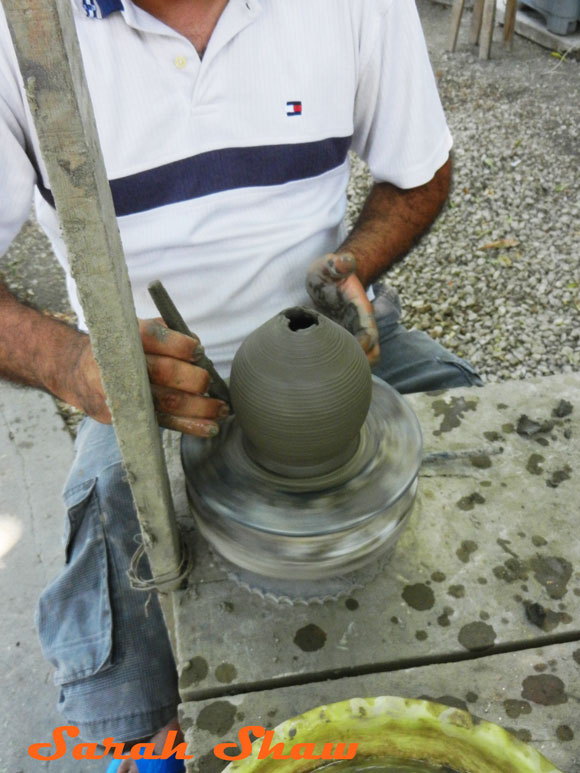 Using his fingers and the corn cob again, Willy collapses the top edge inward to create a curved shape at the top of the pot. You can see, too, the spots of water on his work surface. Willy continues to dip his fingers and the tools in a pail of water which helps to keep the clay moist and pliable. If he didn’t as he continued to work the clay in the air and heat, it would start to dry which could cause the clay to crack and break making for an inferior pot. 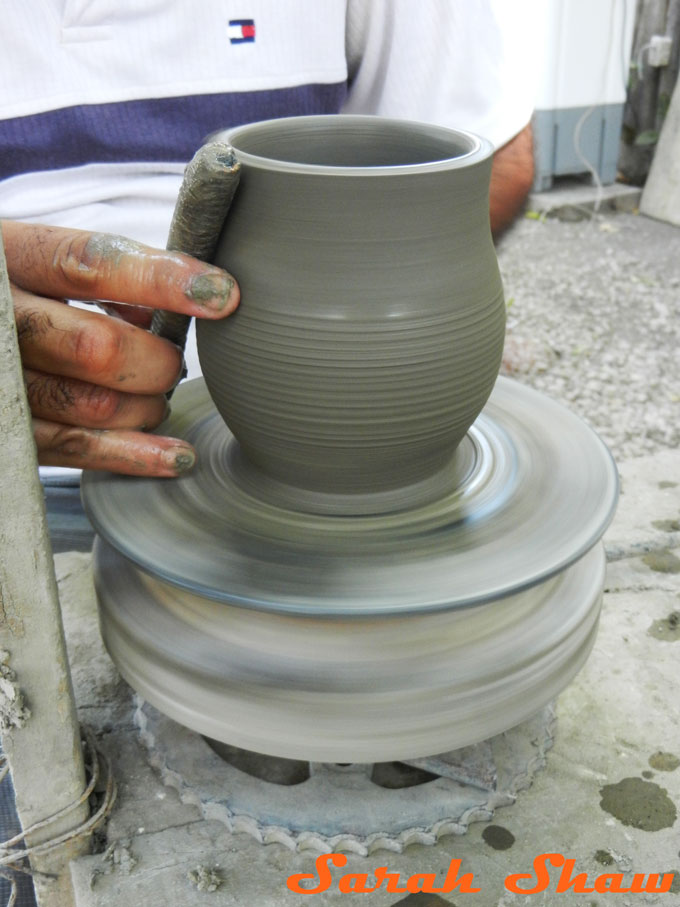 Pulling the top edge back out adds another curve to the pot and more interest. Through this method, he has added a neck to his pot making it easier to pour liquids from. 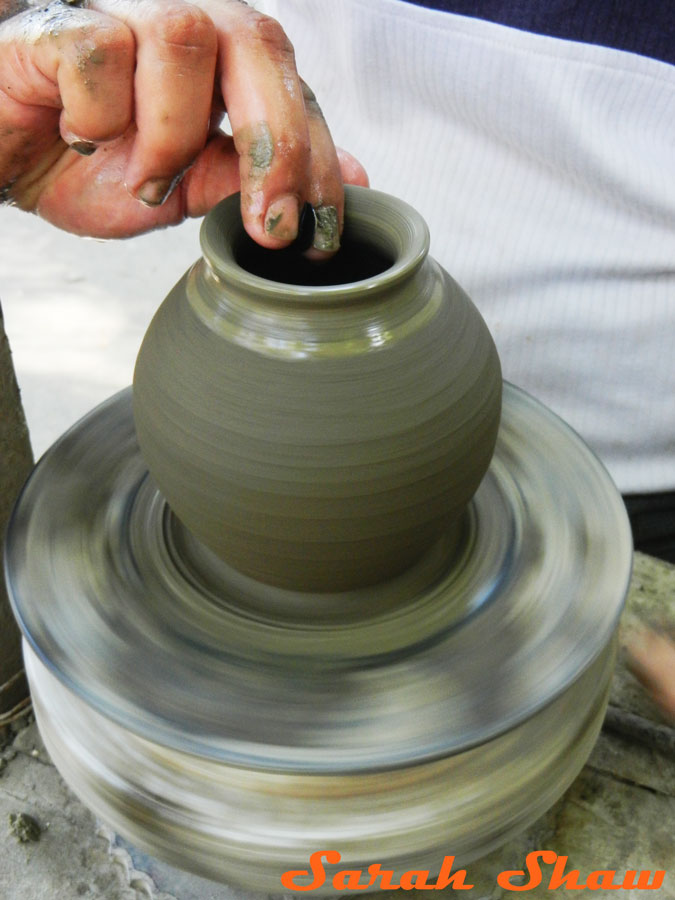 Next he creates a lip along the top rim of the pot which has taken on a jar shape. Again you can see how wet his fingers are. When they are moist and slippery like that, they slide easily over the clay as it is worked into shape. His left hand spins the wheel faster and faster as the pot nears completion. 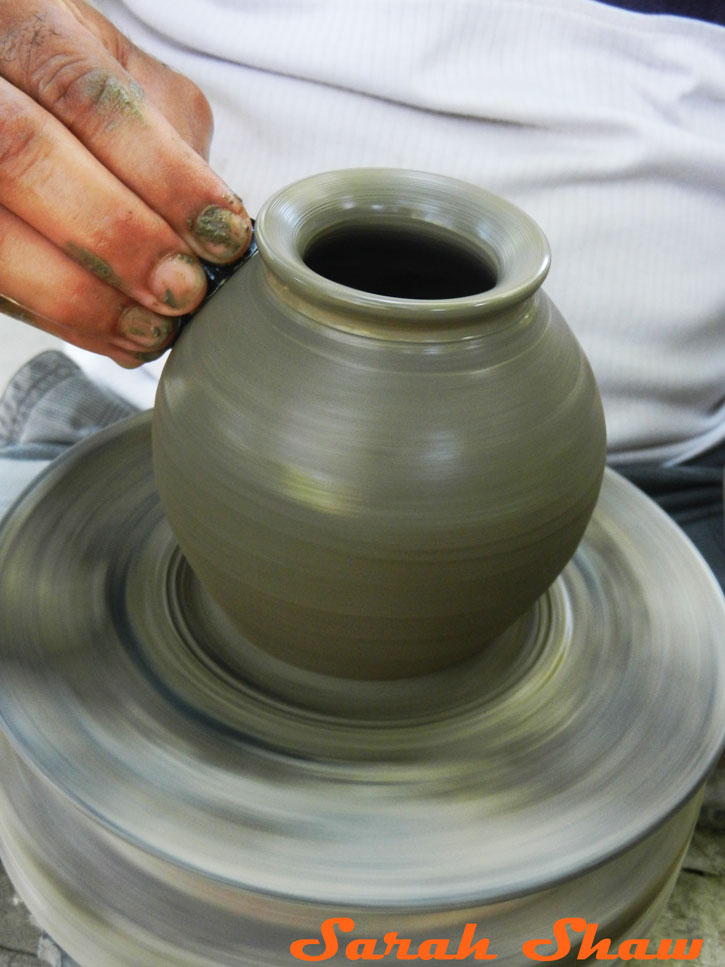 Willy takes a tool made from the dried shell of a gourd and allows it to smooth and buff the exterior of the pot as he turns the wheel quickly. These traditional pots all have a very smooth surface until sometimes during decoration, patterns may be incised. 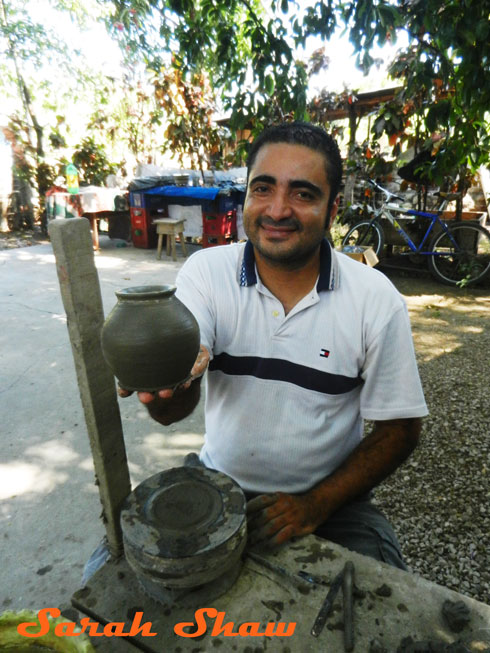 Once finished, Willy uses a piece of wire that he places behind the pot at the base and pulls evenly towards him. This cuts the pot off and it is now complete. Willy shows off his newest creation. 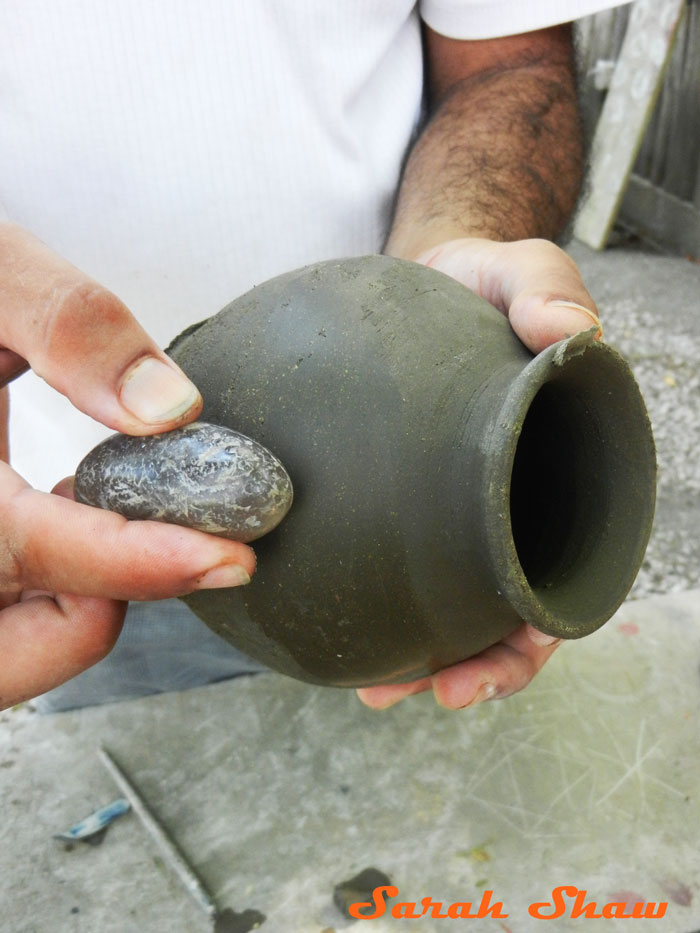 Next the pot will be burnished with a smooth piece of quartz stone. Massaging the exterior of the pot in small circles, he buffs away any little bits of unevenness on the surface which helps to prepare the pot for decoration. 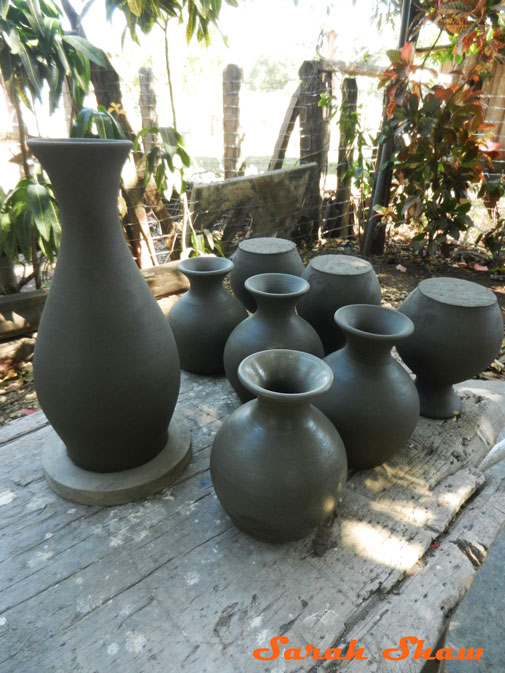 After he is satisfied with the surface, the pot will be left to dry in the sun for a day before it is time to add the decorations and then fire them in the kiln. 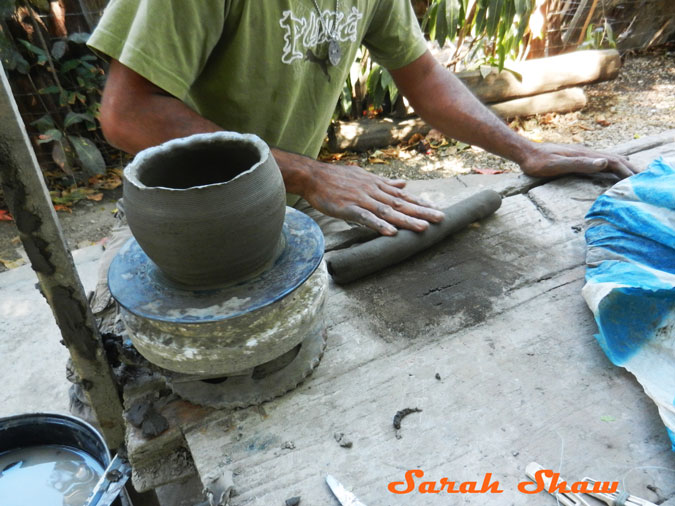 Another potter uses the coil method to build up the sides of the pot he creates. First he rolls out some clay into a long snake. Next he coils the clay around the top edge of pot. A potter might add a coil when he wants his pot to be taller but doesn’t have enough clay in the existing pot to just spin it higher as the walls would be too thin and it would be in danger of collapsing. He uses his fingers to pinch the new clay into the body of the pot before he spins the pot to help smooth the surface so it appears as if this clay has always been together. 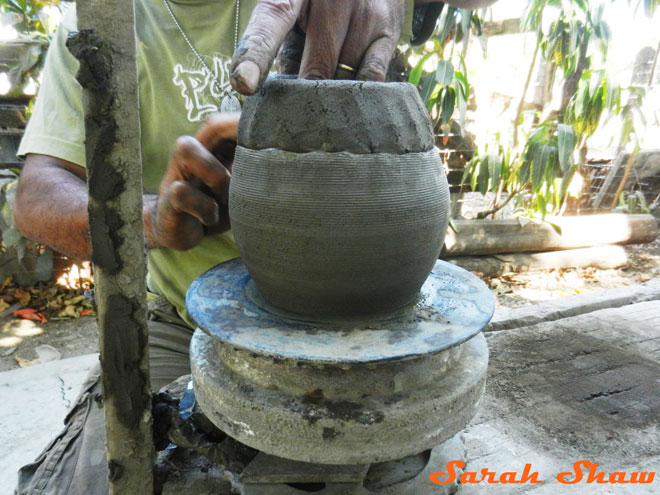 Here is his completed pot. He used coils to add height all the way up. This allowed for thicker walls which will make for a very solid pot. You can see him using a wire to slice his pot off the wheel. 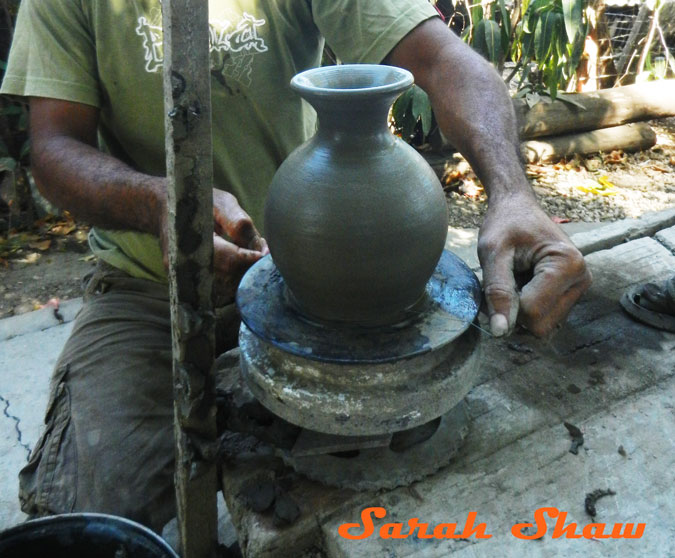 We will give these pots a day to dry and then it will be time for the artists to decorate them before they head to the kiln. In the meantime, visit WanderShopper’s Facebook Fanpage and the Costa Rica Album to see more images of the potters at work. Please visit WanderShopper again tomorrow so see how traditional designs are painted on these pots.

If you are planning a trip to Costa Rica, you will want to make sure to visits Sea Hag and Ciao Bella in Playa del Coco as well as Azul Profundo Boutique in Tamarindo. Please click on the links to see earlier posts and learn more about these WanderShopper favorites.