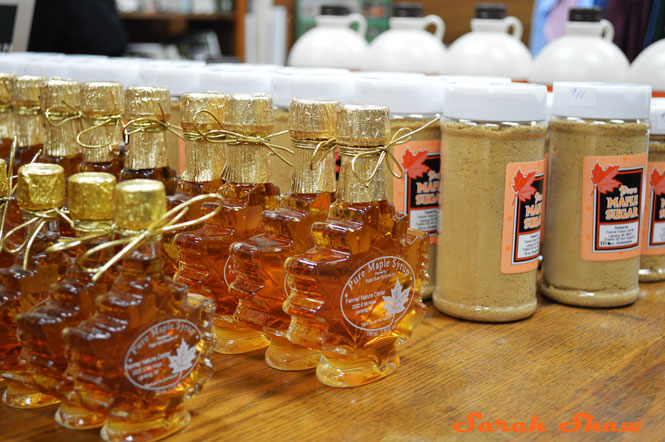 The sweet, sweet end of winter is signaled by Maple Syrup Festival celebrations in Michigan and all over the northeastern United States. Growing up with an abundance of maple syrup producers in Michigan plus a family connection to Vermont, I’ve never been able to enjoy anything but the real thing when I sit down to pancakes or french toast for breakfast. Celebrating the coming of spring and delicious maple syrup seems like such a great way to spend an afternoon. Just a few miles from my house in Lansing, the Fenner Nature Center is planning their annual Maple Syrup Festival for this Saturday. I was excited to join a tour, in advance of the big day at Fenner, to learn more about maple syrup so I could share it with you. 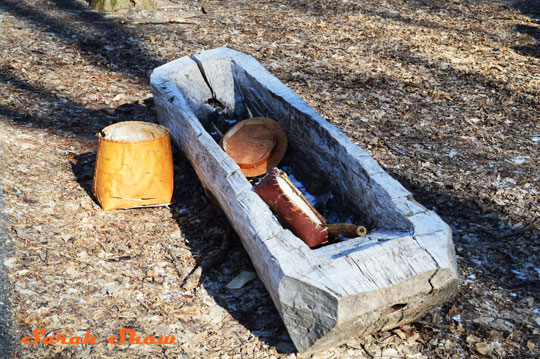 For thousands of years, Native Americans have been tapping maple trees, collecting the sap and boiling it off to create sugar. Prior to the Maple Moon, the third full moon of the year which signaled the start of the sap collection season, woodland tribes would create bowls from birch bark called mokuks. They would then pour the collected sap into dug out logs for storage. Unable to put a mokuk or the log over a fire as it would burn, they would boil the sap by placing stones heated in a fire into the container. Hot rocks continued to be cycled in until the sap thickened into a syrup. By continuing to boil it, the liquid would evaporate and make one of three kinds of sugar. The first is a taffy like wax sugar created by pouring the syrup on snow. The second was a cake sugar made from crystallized syrup. And the third was a granulated grain sugar made from remnants. Men would take this sugar, stored in a neck pouch, along with them on long hunts for energy. It is estimated that in some tribes, people consumed up to a pound of maple sugar a day. 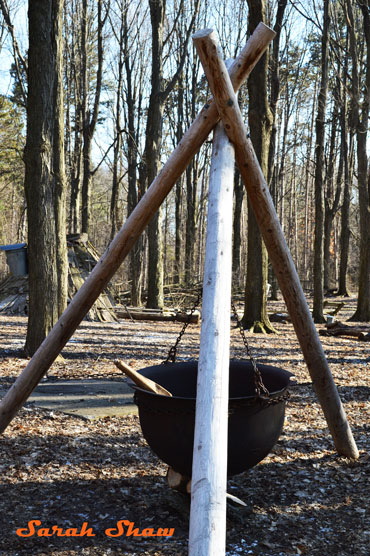 Maple syrup production was one of many things Native Americans taught the new settlers from Europe. One of the early advances was creating bore holes for collecting the syrup. The Native Americans had been collecting sap by making deep slashes in the maple trees but after a couple years, the trees would be exhausted and die. As the tribes would simply move to another area for harvest, this had never been a problem. The European settlers wanted to stay in one place and they needed a way to collect sap while doing less damage to the tree which boring allowed. They inserted tubes made from twigs into the hole to direct the sap into a collection bucket. Another advancement was using large iron cauldrons they had brought with them which allowed them to boil the sap directly over a fire. Sap spoils quickly in warmer weather so it needed to be collected and processed daily. Sugar shacks, or sugar houses, were built in wooded valleys so that processing could be done easily near the source. 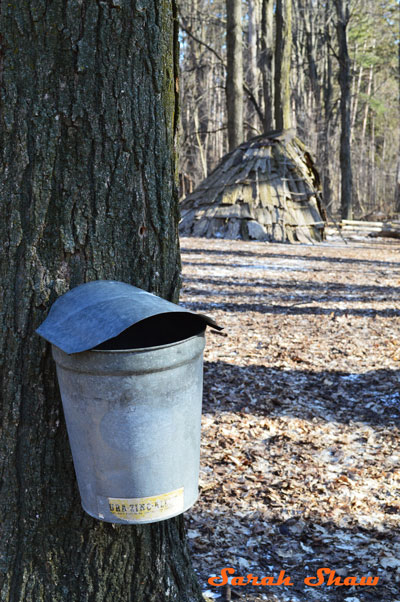 Maple sap can only be collected for a few weeks each season so advances in metal production in the later 1800’s allowed for huge production increases. The first was sheet metal which lead to the creation of the aluminum can for storing and preserving food, including maple syrup. Sheet metal also was used to create buckets with lids to keep out moisture and debris. Additionally, flat metal evaporating pans were made for the syrup making process. Sap flows best when there is a rapid warm up during the day. Once the tree begins to bud or the wood reached 40 degrees, sap collection stops. In the nineteenth century, maple sugar was the politically correct sugar to enjoy as people were asked to boycott sugar made by slaves from sugar cane in the Carribean. 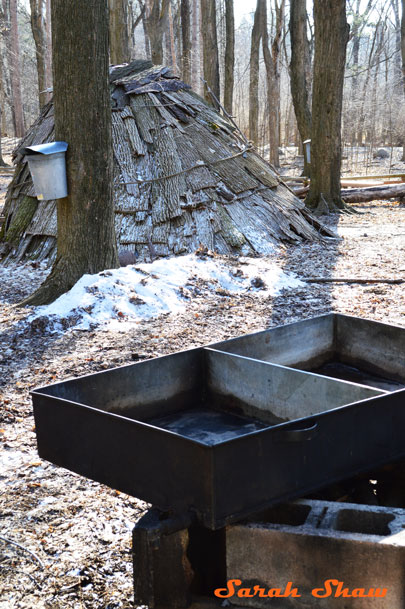 There are 13 species of maple trees that can be tapped for maple syrup from the 124 species found in the north. The most popular, and productive, is the sugar maple which can live for over 200 years.  It takes about 40 gallons of sugar maple sap to create one gallon of maple syrup. When you think about the amount of time and effort from taping, collecting and boiling as well as the quantity of sap needed, you can see why maple syrup is priced like a valuable commodity. In Michigan, only 10% of maple trees are tapped in any one year. It is the first crop harvested and can be found at farmers markets around the state. Michigan ranks 5th in the country in maple syrup production totaling 90,000 gallons a year. The top producer is Vermont with 500,000 gallons a year. 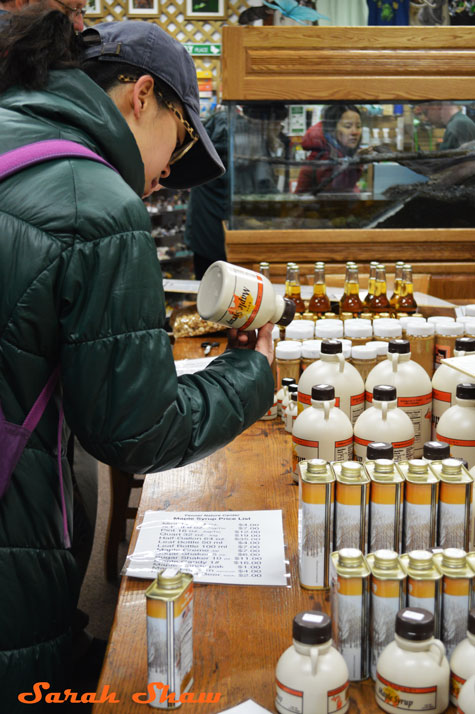 Maple syrup is given a grade which relates to its flavor and color. Grade is not associated with quality though. You will find that lower graded syrups are sometimes the most flavorful and will often be used in cooking and baking instead of as a condiment on your flapjacks. The lightest maple syrup sold is called fancy or grade A light amber. The next step down the scale is the medium amber syrup or grade A medium amber. The third is called dark amber or sometimes grade A dark amber. The final is called grade B or grade B for processing and is often headed for food manufactures to be added to granola, puddings and ice creams. Another general rule of thumb is that the lighter the syrup, the sweeter it will be.

Maple syrup is organic, sustainable and a native crop. It contains no animal products, no fats , no artificial colors or preservatives. It does contain vitamins and minerals at higher rates than honey. One ounce of maple syrup has 80 calories compared to 90 for honey and 120 for corn syrup. 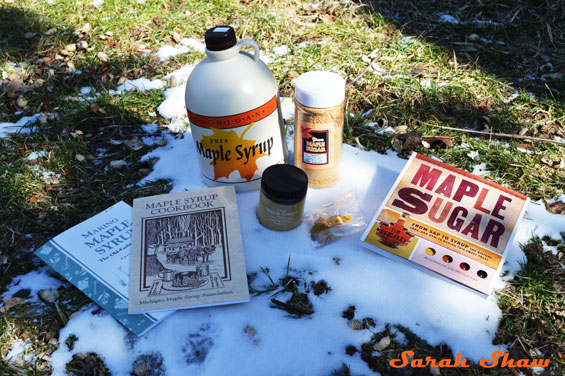 Maple syrup is the obvious product from the collection of maple sap. Fenner Nature Center will have a nice selection of other maple items for sale too at their Maple Syrup Festival. I picked up some maple sugar which is great sprinkled on buttered toast or oatmeal. Another great spread for toast is maple cream. Made by combining maple syrup with a small bit of  butter, heating it then cooling it rapidly and then finally whipping it, I find it a divine way to enjoy pure maple flavors. Maple sugar candy is always popular and is often formed into decorative shapes such as maple leaves. Fenner’s sale also includes maple root beer and some maple glazed popcorn with peanuts. On Saturday, they will also be making maple cotton candy. 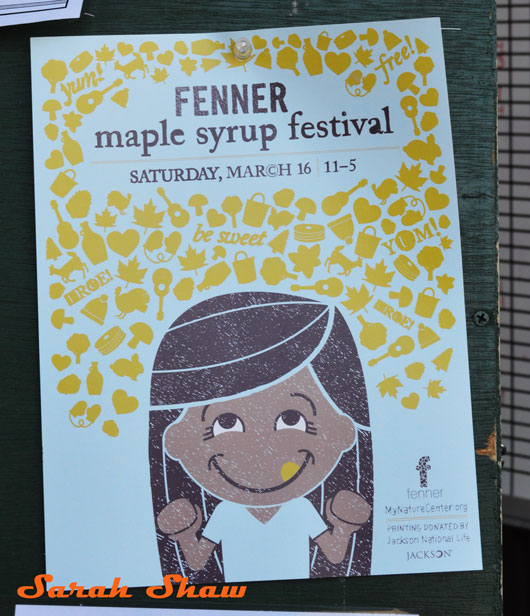 In addition to all the great maple products for sale at Fenner Nature Center’s Maple Syrup Festival this Saturday, there will also be an All-You-Can-Eat flapjacks and sausage fundraiser called Flapjacks for Fenner. Guiness World Record Holder flapjack flippers from Chris Cakes will be on hand flipping faster that you can eat them. The flapjacks will be served from 12:00 – 3:00 pm. The whole family will enjoy a variety of educational demonstrations and activities including learning more about how maple sap is turned into sweet treats. Fenner has been serving the greater Lansing community for over 50 years and is always free to visit and explore their trails. Attending the fundraiser is a great way to spend an afternoon with your family while helping to provide funding needed for Fenner to continue their programs to the public like Nature Day Camps and Knee-High Naturalists. To learn more about Fenner Nature Center, please visit their website.

Are you interested in trying to collect maple sap and make your own syrup? Many amateur enthusiasts are doing so in their own backyards and woods. A great source for supplies is Sugar Bush Supply Company and are located in nearby Mason, Michigan. 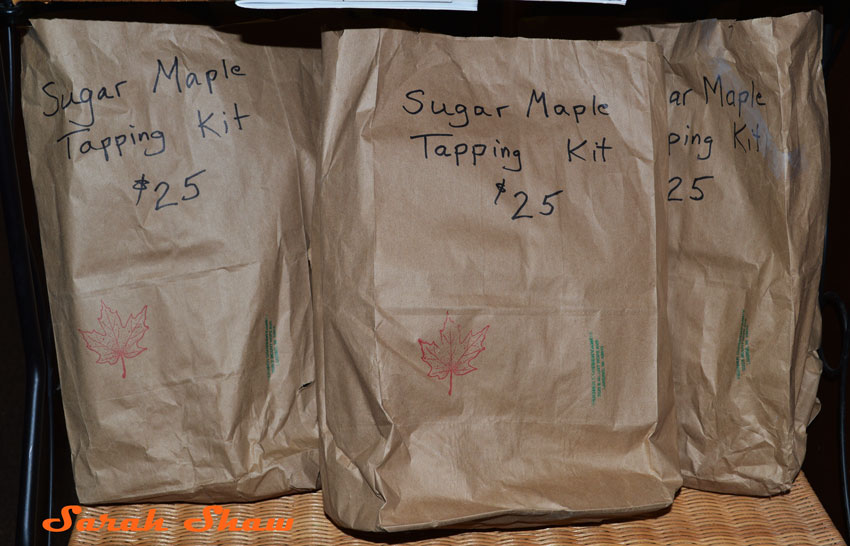 Would you like to learn more about how maple syrup is made? Visiting the Michigan Maple Syrup Association’s website is a good place to start. They have a lot of information and photos as well as listings of other festivals going on in Michigan like in Vermontville and Shepherd. I will also share a great recipe using maple syrup at the end of this post. Would you like to order some Michigan Maple Syrup? Currey Farms from Charlevoix has online ordering and can ship a variety of sizes and styles of bottles. A great book for adults to read is Maple Sugar: From Sap to Syrup: The History, Lore, and How-To Behind This Sweet Treat

. And for children, I would recommend A Day at the Sugar Bush

.  I discovered both of these books at Fenner Nature Center in their Explore Store so they are easy to pick up while you are there on Saturday. 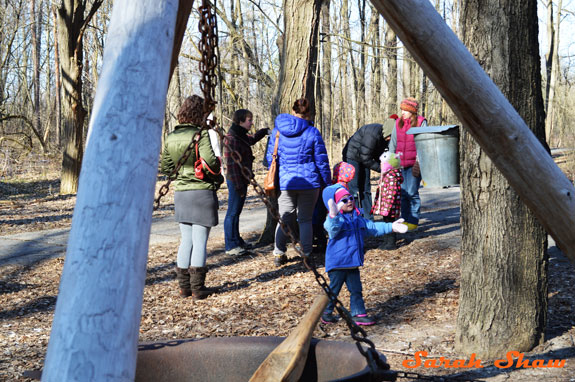 Now, I know already that none of you are going to tell me that you prefer artificial maple flavored syrup over the real thing. I can’t imagine such a person existing! So let me instead ask you, what is your favorite way to enjoy maple syrup? Have you ever tried cooking with it? What is your favorite dish?

Combine the rice and milk. Beat the eggs and Maple Syrup together; add them to the rice and milk. Add remaining ingredients. Pour into buttered baking dish and set in a pan of hot water. Bake in a 350 degrees oven or cook in a double boiler  on top of the stove. Serve warm or cold (6-8 servings.)