Before you read this article, you have to understand that when I moved to the U.S. in 1995, I was 25 and I did not have a driver’s license. In fact, I had never driven a car. When I applied for my license, the DMV official looked at me and said “You took your time love, what kept you?”

But I was a willing convert to the freeway-driving, need-a-car world which is the Western U.S. After we moved to Seattle, whenever we visited friends in the San Francisco Bay Area, renting a car was an assumed expense in planning a trip. And then, in 2003, the BART connection to SFO was opened. With that, it seemed that car rental was truly an unnecessary extravagance. On our most recent trip to San Francisco for Thanksgiving, I started my planning assuming that we would use public transit all the way.

What was surprising was how easy this turned out to be, from picking up BART tickets at the SFO station to exploring the city itself using the MUNI buses and trams and hopping on the Caltrain to visit friends living further down the Peninsula. Packing light for the trip made using transit easier since it meant that we only had three small carry-on sized suitcases to cart about to and from the airport – one for each of the “men” to look after. 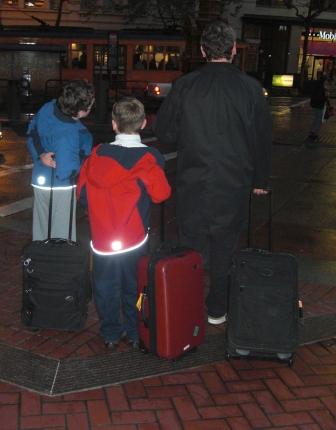 We use the buses pretty regularly in Seattle, so using the MUNI was a familiar experience for my children. The new NextBus system at MUNI bus shelters is just awesome. The displays show the number and arrival time of the next bus which will stop at that shelter. I seriously can’t wait until we have a similar system here.

The big benefit of using public transit is, of course, the costs. Using services such as Priceline.com, a compact rental car can cost as little as $15/day (not including taxes and fuel). However, that doesn’t help with parking costs – which can be astronomical in cities. As I mentioned in a previous post, we paid a fraction of the rack rate for our hotel room, but parking charges at the hotel garage run about $48/day giving a potential total cost of car rental for five days of $350. In comparison, we spent $101 on BART/MUNI/Caltrain for our entire trip.

What’s the public transit system like in your city and would you recommend that visitors depend on transit entirely or do you think a car is required?

If you haven’t already, don’t forget to support Passports With Purpose by buying a $10 raffle ticket.