My children are disgracefully fussy about food. I’m not going to even try to comprehend why. The genetics involved (i.e. mine and the WanderDad’s) should point towards adventurous palates with a penchant for hot and spicy. The reality couldn’t be further from the truth. I did an experiment once, and fed them their favorite food every day for dinner – wondering how long it would be before they would object. Two months later, I was sick of preparing pasta and cheese so I told the kids that I was going to do something else for dinner that night and was told “Well, it’s about time, Mom. We’ve had an awful lot of pasta and cheese lately.” Who knew?

Since my children are food fussy and I, like any mom, worry about what and how much they eat, food issues can add additional stress to traveling. One thing which helps is that we live in a fairly large city which has many, many nationalities represented in the restaurants available. We use these usually interesting, sometimes funky ethnic restaurants to try out new foods before we travel. Sometimes it’s a disaster – and we have to come home and cook for the kids – and sometimes it works like a dream. It’s never a waste of time since it gives me advance notice on whether or not food will be a problem when we’re at our planned destination.

Food is one of the best ways to experience and appreciate a new country. It makes me sad to see parents feeding their children pizza and chicken nuggets when they could be sampling local fare. Getting your children to try something new does take patience (which I’m not so good at) but sometimes it takes no more than a hungry child and a little encouragement to try the local ‘plain food’. When we visited Cyprus in 2007, CAM developed a taste for hummus and pita – out of necessity, because he was hungry and there wasn’t a scrap of peanut butter in sight. You have no idea how excited I was by this development. 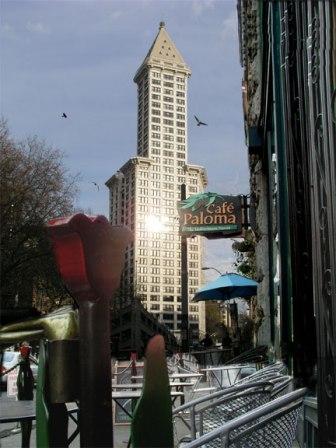 Cafe Paloma (entrance on the right-hand side of the photo) with Smith Tower in the background.

It’s easy to forget that getting a child to try out new foods when you’re away from home also pays dividends when you return. On a recent Saturday afternoon, we took a wander around the Pioneer Square area in Seattle and decided to have lunch at Cafe Paloma, a Turkish restaurant which is a favorite of mine. I’ve eaten there many times – usually for lunch since I work nearby – but this was the first time we’d taken the kids there. It was a bit of a gamble since hungry kids are grumpy kids and we still had a 30-minute bus ride home.

Cafe Paloma was quiet when we entered and the staff welcomed us warmly. There was, of course, no “kid’s menu”. We ordered some hummus to start, lamb pitas for the WanderDad and I and a chicken pita for the boys to share. I requested that the chicken pita be served with all salad and dressings on the side and asked for two plates. My food fussy kids will eat chicken and warm bread any time but (vile) greenery on the chicken could cause them to refuse to eat.

When the food arrived, CAM and BigB polished the naked chicken pita with gusto. The salad and the yogurt sauce were, as predicted, totally ignored. (Our lamb pitas, sauce and all, were scrumptious). I’m pretty impressed with how our waitress had interpreted what I had asked for and then brought the boys a plate each on which half a chicken pita was beautifully presented. There’s not many $10-a-plate places where you will get that level of service.

I feel so good writing about this. It’s taken many, many trips and countless arguments over food both at home and abroad to get to a place where this kind of food experiment would go so smoothly. Over the coming year we’ll be experimenting with Asian cuisines (outside of spring rolls, chicken satay and fried rice) in the International District in preparation for our RTW trip. We tried Dim Sum in a Vietnamese restaurant earlier this year and my boys ate exactly nothing. It’s going to take a little more effort than getting them used to mediterranean foods, but I think we’re up for the challenge.