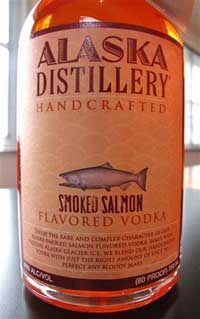 Happy Vodka Day! Today, Thursday, October 4th, is National Vodka Day. Vodka is not my favorite spirit. But it is America’s libation of choice. According to the National Vodka Day website, vodka accounts for 20-25% of the spirits sold in U.S., surpassing bourbon as the drink of choice since the 1970s.

I do enjoy sharing a vodka martini with my grandfather when I visit my grandparents in Southern Colorado and will definitely be thinking about him today on National Vodka Day. It’s practically the only cocktail he’ll drink and it is a religious experience for him. He measures everything out very carefully and always drinks it at 5 pm.

One of main reasons I’m not the biggest fan of vodka is it is a near tasteless, odorless spirit, like I’d rather have water than bother with vodka. But, to be a good sport and celebrate National Vodka Day like a true Russian would, I decided to find vodkas I would drink (some for curiosity and some just to say I had).

Here are some of the most surreal:

Smoked Salmon Alaska Distillery Vodka (why eat it when you can drink it?) 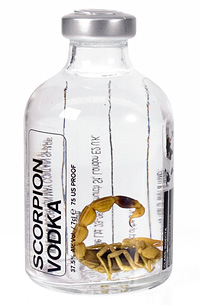 Scorpion Vodka (who needs the measly worm in the tequila when you can have a scorpion?)

Three Olives Bubble (as in bubble gum, wonder if comic strips come with too)

Smirnoff Fluffed Marshmallows (I feel a campfire coming on)

Cupcake Frosting Vodka (pour some frosting on me?)

Georgi Waffle Vodka (hey, I guess you can justify drinking now before noon with breakfast in a glass and can also be used on National Waffle Day)

And to properly celebrate the day, you should know a few things about it, like during the reign of Russia’s Ekaterina the Great, vodka was considered the most elite drink in the world. Read on at EnglishRussia.com for 10 Facts About Vodka.