Thanksgiving Coffee Company, in downtown historic Mendicino, CA, proudly displays a sign that reads: not just a cup, but a just cup. With a slogan like that, I had to venture in to find out what kind of just they were in search of. 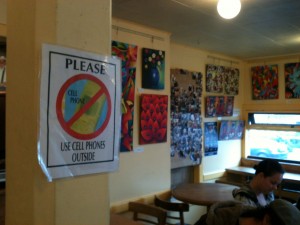 The first thing that caught my eye was a ‘no cell phones’ sign. Next was the sign that they will no longer sell plastic water bottles due to environmental damage, although they’d like to benefit from the profits, they can only offer water in a glass now.

This was a radical place in just the signage alone!

I asked if I could take his picture. He asked why. I explained that he had allure. He said he wished women my age would have noticed that forty years ago! The ice was broken and we were off on a forty minute meet and greet.

Discussing coffee roasting and his fierce dedication to not the coffee itself but the people: from the coffee farmers to the people he served the coffee to in his coffee shop, he went on to more personal matters.  After becoming one of the original “Roastmasters” (his self-appointed moniker) of the 70’s in the coffee industry, he made a life changing trip to Nicaragua.

Heartbroken about the poverty he saw there, the motto of “Not just a cup, but a just cup” was born. He then went on to champion fair trade in the coffee industry, especially in South American countries like Bolivia, Nicaragua and Columbia. 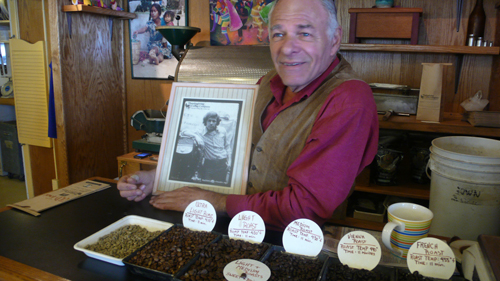 My latte tasted all the better knowing Paul Katzeff is making a better world one cup at a time.

Do yourself a favor and stop in when you visit Mendicino for a enlightening lesson not only in a what it takes to make a fine cup of coffee but also in human dignity.

Photos by the author.