George Washington is not only this nation’s most beloved President but come to find out – a great mixologist and craft whiskey maker as well! 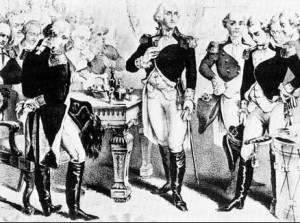 As the generous chubby man in the horrible red outfit is as synonymous with Christmas – so are my cravings for this gluttonous holiday treat: glorious eggnog.  Channeling the spirit of Martha Stewart, I have ambitions of making my own this year and researching recipes, I found a peculiar fun fact about our nation’s first president: he made a mean eggnog!

This recipe below is a modern version of the stout eggnog George Washington whipped up to serve his guests during the holidays at Mount Vernon. The recipe was found in his paperwork. Of course, the spices are part of the modern version as they would have been way too lux, even for Mr. President.

Two facts to know before you start:

Eggnog is not like a normal cocktail – mix, shake and serve. No sir, plan in advance. It takes at least four days to cure the raw eggs.

Beat whites of eggs until stiff and fold slowly into the alcohol mixture. Add nutmeg and cinnamon stick, and stir well to incorporate. Cover mixture in an airtight container.

Allow eggnog to cure undisturbed for several days (4-7) in the coldest part of the refrigerator, or outside in a very cold (below 40 degrees) place. The mixture will separate as it cures. This is OK. Just be sure to re-incorporate mixture before serving cold. Recipe courtesy of CD Kitchen.

Fun GW fact: George Washington was a guy this Wanderlusher could love. He built and owned one of the largest rye whiskey distilleries of the eighteenth century at Mount Vernon.

CNN’s Egg Nog: Everything You Need to Know

LA Times’ EggNog as You’ve Never Had it – Creative twists on classic recipes.