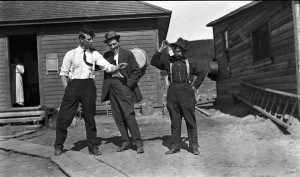 There is something about being able to enjoy a nice glass of whiskey that is just so, adult. In the constant struggle toward proving my own adulthood to myself, my lack of appreciation for whiskey gnaws at my confidence. It’s not that I don’t want to appreciate it, it just doesn’t taste good to me.

Westland Distillery is the largest producer of single malt whiskey in the Western Hemisphere. That ranking makes it sound like a large operation, but compared to the size of the whiskey operations of Scotland, it would be on the smaller end. Westland Distillery isn’t concerned about the size, however. “Our mission is to put Washington State on the map as a place to produce world class whiskey,” Stephen says, ‘the state itself is screaming for a single malt whiskey.”

Stephen starts off the whiskey tasting easy with Westland’s Flagship American Single Malt Whiskey.  “We like to say distilled in the Scottish tradition, matured in the American Style, I think it tastes like my wife’s peach cobbler. Some people taste  chocolate chip cookies, or hints of vanilla from the oak.”  I ask Jim if you could pair this whiskey with dessert – I’m contemplating how to best bring out these dessert-like flavors of which he speaks. The answer is affirmative. “I would have this with peach cobbler, absolutely. I had it with whole wheat flour thumbprint cookies with raspberry jam in the middle the other day, it was great.” Jim assures me,  “it’s really approachable and accessible for a new whiskey drinker, but seasoned veterans can appreciate it as well.”

I have to admit, I didn’t taste a whole lot of chocolate chip cookie as the whiskey burned it’s way down my throat, but I was willing to keep trying.

Next, Jim has us try the Sherry Wood.   “It starts its life the same as the flagship, then gets aged in the sherry barrels. The barrels have been aging sherry for 70-80 years. You’ll get hints of maple syrup on the nose.” Jim is quick to point out that Westland is not out to make a caricature of sherry. “We aren’t out to make a stupid cartoon American sherry whiskey, we’re out to make a unique flavor.”

Even if I can’t say I like the whiskey yet, I can taste the difference between the two we’ve had so far. I’m counting this vital step as key to the process. I even go so far as to share my observations with Jim. My clandestine categorization of the Sherry Wood being more cinnamon-like-spicy gets a sympathetic nod of approval.

“We’re going to open it up with some water.” I’m definitely thinking that Jim thinks I can’t handle the whiskey like a big girl after the cinnamon comment, but I’m pleasantly surprised. “A few drops of water lets the ethanol break free of the flavor compounds, so, the flavor compounds become more accessible, and you should be able to get more flavor.”

To my surprise and delight, I (again) notice a difference in flavor. And, low and behold, I like the flavor more.

“In Scotland you’d be remiss if you didn’t taste your whiskey with water. The prevailing wisdom is that you should add water to some of it.” Jim goes on, “This is all personal, but what I do, when trying to hone in on flavors, is swirl it around in the glass, smell it, then acquaint myself with it on my tongue. I then enjoy a few sips, then add a few drops of water to experience that change. There are some people that swear by putting ice in the whiskey to continuously change the flavor. I don’t like that because it cools the whiskey down. The flavor compounds become less accessible when they are cold.”

Though I did grow a little more fond of whiskey, and a little more inspired to try (sans trendy huge ice-cube) whiskey more often, I still don’t feel quite like a pro. I ask Jim for advice on learning to love whiskey. “I’m fairly new to the company, and this is my unbiased, outside opinion. I think you are in the right spot. Especially with our flagship; it’s fruity, it’s accessible. We concentrate on creating a lot of flavor, even if that means we have to produce less than we wanted to on any given day. A lot of what people describe [about our whiskey] is that the harshness is gone.

Looking to get your hands on some Washington whiskey? Westland Distillery’s products can be found at across the US and even online. Westland also welcomes visitors! Find out more on their website.