Home / Lunch / WanderFood Wednesday: Ten Thousand Buddhas, One Highway Patrolman, But No Lunch
« Winding Through the Redwood Forest on the “Hit The Road Hungry” Road Trip |
Main
| Time for Biscuits and Gravy! » 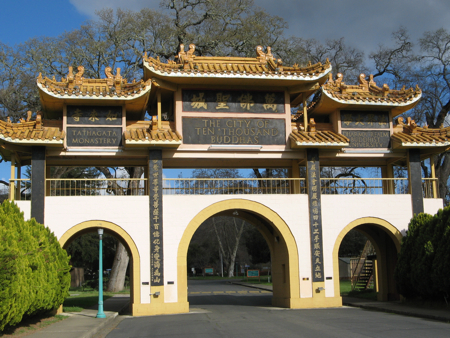 What does it say about my karma if the California Highway Patrol pulls me over in the driveway of a Buddhist monastery?

I’ve rolled off Highway 101 near the northern California town of Ukiah, hoping to stretch my legs at the City of Ten Thousand Buddhas, a monastery built on the grounds of a former psychiatric hospital on the edge of town.

Wrapped up in otherworldly thoughts, I apparently notice too late that the speed limit in this world has abruptly dropped to 30 mph, and suddenly, there’s a flashing light behind me.

I don’t believe in divine intervention, but I’m grateful to whatever spirit moved the officer to wave me on with only a stern warning to watch my speed. 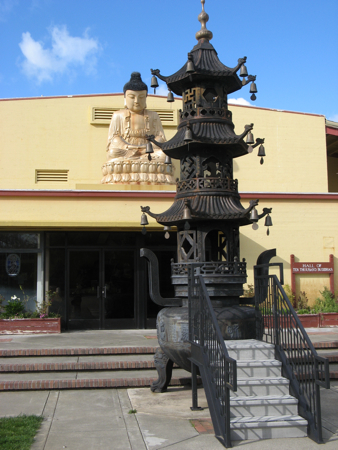 Slightly rattled by my encounter with the patrolman, I wander through the monastery campus, past streets with names like Mindfulness Avenue and Patience Way.

Despite the temple’s name, I’m still surprised when I enter the blocky beige building and tiptoe into the silent sanctuary. It’s covered top to bottom with small golden Buddha statues.

(I wish I could have taken a photo, but it felt disrespectful, with two people kneeling in prayer. You can get the general idea of the Buddha statues in the temple interior here and here.) 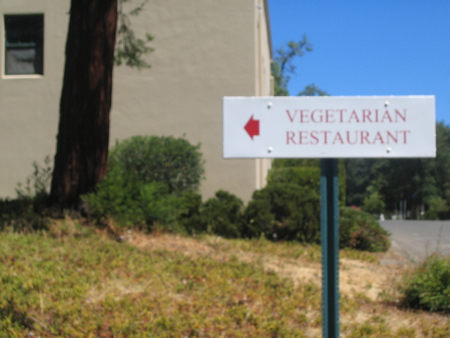 Of course, this story has a food angle, too. The earnest young man at the temple information desk tells me that I’ve arrived too late in the afternoon for the vegetarian lunch that is served to visitors every day (except Tuesday). He says he hopes that on my next visit, I will come in time for a meal.

When I say that yes, I’d like to return to eat, he touches his palms together, ever so slightly bows his head, and far more gently than the highway patrolman, sends me on my way.

The previous posts in this series are:
When Plans for Pie Go Awry
Taco Craving
Pok Pok in Portland
Living The Serious Coffee Lifestyle in Portland
Bites By Bike, with Portland’s Pedal Bike Tours
Taste of Korea: A Taste of the Food Cart Scene in Portland
I Should Have Had the Deep-Fried Pickles
Winding Through the Redwood Forest