Home / Lunch / Taste of Korea: A Taste of the Food Cart Scene in Portland on the “Hit the Road Hungry” Road Trip
« WanderFood Wednesday: Bites By Bike, with Portland’s Pedal Bike Tours |
Main
| I Should Have Had the Deep-Fried Pickles…: Hitting The Road Hungry in Southern Oregon » 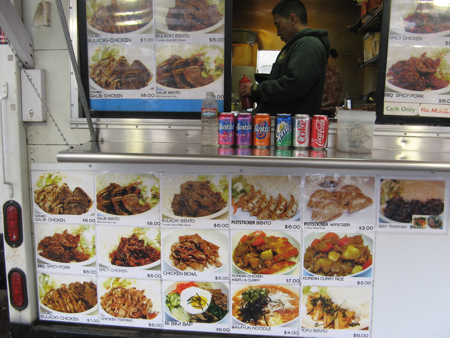 So many food carts, so little time…

I really didn’t need to eat lunch before I left Portland, since I had spent the morning on the Bites by Bike food tour, with Pedal Bike Tours.

But how could I leave the city without sampling at least one of the famous food carts?

Thanks to a tip from Pedal Bike Tours’ founder Todd Roll, I decided that my “taste of Portland” should be the bibimbap from Taste of Korea, a cart in the food truck “pod” at SW 3rd and Stark. 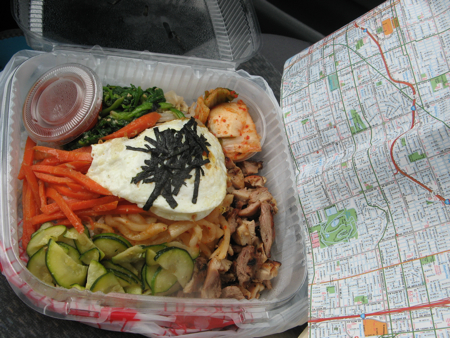 The previous posts in this series are:
When Plans for Pie Go Awry
Taco Craving
Pok Pok in Portland
Living The Serious Coffee Lifestyle in Portland
Bites By Bike, with Portland’s Pedal Bike Tours