Home / American West / In Praise of Huckleberries: A Taste of the Northwest
« Product Review: Sky’s the Limit with Anatomie’s Skyler Skinny Pants |
Main
| Fair Trade Underwear: “The Second Best Thing In Your Pants” » 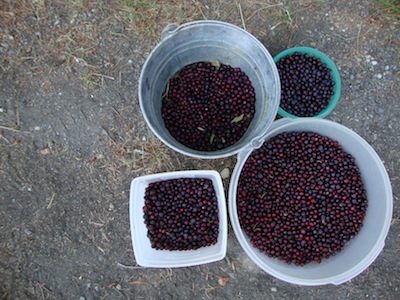 When I moved to the Pacific Northwest four years ago, I learned quickly that this is Huckleberry Country. (Huckleberry Country is also a pretty good name for a band that might play at, say, the Saturday farmers market or a street fair).

I was familiar with Huckleberries of the Finn and Hound variety. But I’d never thought of them as raw materials for pie, nor did I understand why people swooned at the mere mention of huckleberry pancakes or ice cream.

I’d read that huckleberries aren’t cultivated. You have to go into wild, or pay someone else to, if you want these treats. So far, there’s not a great way to grow them commercially. The untamed spirit of the berry makes a great metaphor for the American West. It’s a sweet-tart edible version of one of those wooden plaques with an eagle carved over an American flag.

A friend describes huckleberries as the anti-consumer fruit. This isn’t to say that there aren’t shelves full of huckleberry products. But the local berries aren’t like blueberries air freighted in all year. We don’t get huckleberries on demand.

When some friends, including this blogger, invited me to go to huckleberry picking with them earlier this month, I said sure thing. I was the only first-timer. I knew my assimilation to the PNW wouldn’t be complete without a huckleberry picking merit badge. We headed up to Mt. Spokane State Park because the berries prefer a “mid-alpine” climate.

I didn’t even have a bucket to put them in, so a friend loaned me her Party Pail ice cream container (shown in the photo below). One member of the group brought two small Tupperware containers, probably less than two cups each, with lids. We mocked. Girl, have you no ambition? Why would you bring dinky little Tupperware? But after almost spilling my bucket for the second time, I recognized the wisdom of the lid. 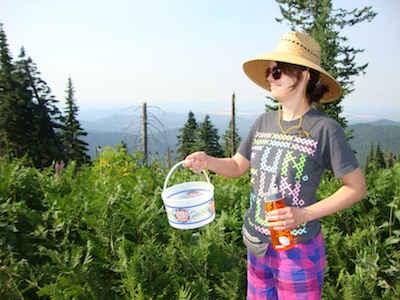 As you can see, I chose my berry-picking attire with care. The sun hat was a good call. I opted for the plaid shorts because of their berry shades. Even so, I managed to sit on fruit that left a rather unladylike splotch on the back of them. The rest of the berry pickers wore black shorts and pants. Genius. I also had the chance to break out my American Apparel fanny pack for hands-free access to my camera and chap stick, vital equipment for any berry picker.

What do huckleberries taste like, my mom asked. A good question, and I didn’t have a simple answer. The closest I’ve come is like a cross between a blueberry and a cherry, but with the lightness of citrus, too. One site describes their taste as “as tasting like a blueberry, raspberry and cranberry all together.”

So, when you’re up on the mountain, how do you know that these berries you’re eating and dropping into your bucket aren’t, like, from The Hunger Games? My strategy was to go with people who’ve done this before. Dea, from Live.Eat.Travel. has a more evidence-based approach: “[L]ook for the little crown on the top that you see on a blueberry. That is unique to all vacciniums (the blueberry family) and means that it is edible.” In fact, I refer you to Dea’s tutorial on picking huckleberries.

I learned that berry picking is slow work. Now wonder these little gems are so pricey. Our containers of berries were like rare money we had to spend carefully, and soon. Would you blow them all on a pie? Would you ration them, little by little, into your pancakes?

In a couple of hours, I picked enough huckleberries to make one crisp. I used the “four fruit crisp” recipe from Simply in Season, one of my favorite Mennonite cookbooks. If I’d had any berries left over, I’d have mixed up some huckleberry mojitos to enjoy in this primo backyard-sitting weather.

And though they say you’re supposed to keep your huckleberry-picking spots a secret–like fishing holes or the workings of a magic trick–here’s a look at mine. 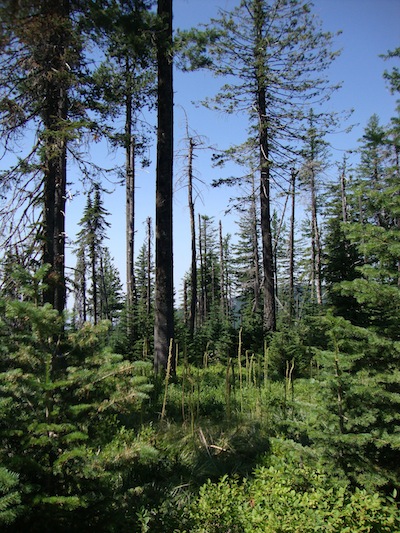