With its rich Russian history, the city of Sitka has long captivated my imagination. Before my visit, I wondered how much of its Russian influence is still visible today.

I didn’t have to wander too far to discover the heart of that dominance: St. Michael’s Cathedral, Alaska’s most famous Russian orthodox church, located in the center of town.

The cathedral, a National Historic landmark, is distinctive for its cross-shaped architecture with two enormous domes and steeples. While the exterior of the structure is beautiful in its simplicity, its interior is adorned with silver and gilt-covered icons, including religious paintings, plaques, screens, chalices and crucifixes and richly embroidered vestments. 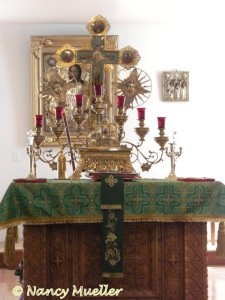 It must have been such a heartbreaking scene in 1966 when the original church was destroyed in a fire, just four years after being granted its landmark status. Once the townspeople realized the church couldn’t be saved, they banded together to retrieve the priceless treasures inside, saving all but the bells, the clock in the bell-tower, and the large icon of the Last Supper above the Royal Doors. 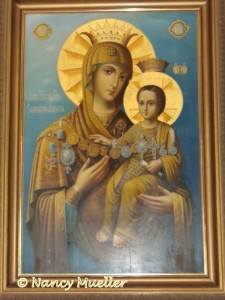 This was the second tragedy that had befallen many of the icons. Several, including the silver-encrusted icon of St. Michael the Archangel, had been retrieved from the Russian warship, the Neva, after it sunk off the coast of Sitka, taking its precious cargo along with it.

Today the rebuilt church stands on its original site, a symbol to the faithful, and a reminder of the resilience of the city’s inhabitants. 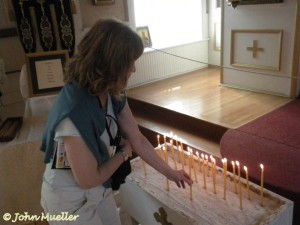