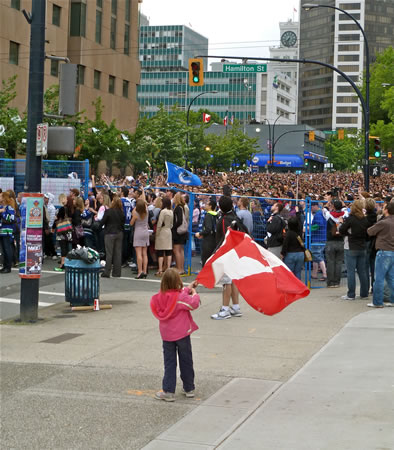 I rolled into Vancouver, BC last Friday afternoon just in time to join the crowds on the streets for game 5 of the Stanley Cup Hockey playoffs. This photo encapsulates what I experienced there – a sense of shared euphoria and excitement among everyone, and collective pride for their team and their city. It was a thrilling, and safe, place to be.

Just a few days later on Wednesday, the Canucks lost the championship run in game 7, and things turned ugly in these same streets. Burning cars, violence, looting and rioting put Vancouver on the map suddenly as the “world’s sorest losers.” The Canadians I was traveling with were heartbroken…and embarrassed.

Reports have since surfaced indicating that the riots were a premeditated effort by a small group of thugs who posed as Canucks fans that night. Having witnessed firsthand the sportsmanship and good-nature of the city, this helps to make sense of the awful mess that’s scarred both Vancouver’s downtown streets and its collective psyche. I only hope now that the press follows up and helps explain to the world that this in no way represents the people of Vancouver, one of the most hospitable places I’ve been.

A local movement had already taken shape the following morning to clean the image and the streets of Vancouver by residents who feel it has been wrongfully taken from them. Multitudes of Canadians have come together to work constructively towards winning back their city and their dignity. This is the face of a true Canucks fan. This is the true Vancouver.

Too often, the actions of a select few come to represent the image of many. As travelers and world citizens, it’s our job to remember that.

Photo Friday continues over at the Delicious Baby website