Home / Ballet / The Sleeping Beauty shines at Pacific Northwest Ballet
« I believe I can fly — at iFly Seattle! |
Main
| A Quiet Retreat in Off-Season Friday Harbor »

Everything about the production of The Sleeping Beauty at Pacific Northwest Ballet is glorious — from the exquisitely detailed scenery and costumes (by Peter Docherty) to the choreography (by Ronald Hynd, after Petipa) to Tchaikovsky’s score. First performed in 1890 in Russia, with Marius Petipa as the choreographer, it is based on the fairy tale by Charles Perrault. (There is a lot of history and symbolism in it, and I suggest you attend a pre-ballet lecture by Doug Fullington if possible — he is very knowledgeable and interesting, and it really adds to the experience.)

Act One of the ballet begins with a soiree to celebrate the christening of Princess Aurora. The king and queen have invited lots of guests including the local fairies who have come to bless the baby. Unfortunately, one rather scary fairy was left off the guest list – Carabosse. That doesn’t go over very well, and she flies into the middle of the party and curses the baby. 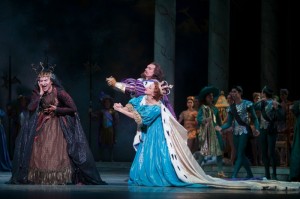 The curse basically says the girl will prick her finger on a spindle and die. This is mitigated by The Lilac Fairy who says the girl will not die, she will only sleep for 100 years — at that point true love will awaken her with a kiss. Despite doing all they can to avoid this, the king and queen cannot prevent it and Princess Aurora does prick her finger on her sixteenth birthday and she falls asleep. In fact, they all fall asleep with her. 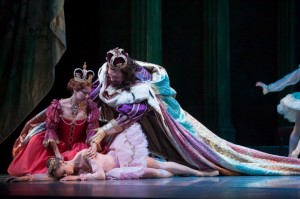 The good news is that there is a prince coming — and at the end of those 100 years he will discover Aurora and fall in love with her. His kiss will awaken her and all with be perfect once again! However, as he is approaching her raised sleeping chamber, who should appear again but Carabosse! The prince takes his sword, which he has put to good use by cutting through all the branches and brambles surrounding Aurora, and he kills Carabosse, kisses Aurora, and the couple sails away. Then they get married and everyone lives happily ever after. 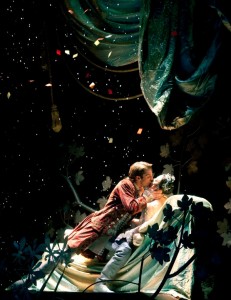 It’s a simple story, but the ballet is quite complex – four acts in three hours (including three 15-minute intermissions). There is a lot to oooh and aaaah over, believe me, from the incredible endurance and balance that the ballerina who plays the part of Aurora demonstrates to the highly entertaining characters that make up the cast to the layered colors and sheen of the tutus and curtains … wow, it is just eye candy to be honest — there is so much to take in! 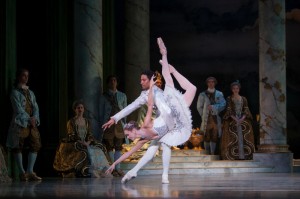 The Sleeping Beauty is one of those classic ballets that you really should see. It’s amazing and Seattle’s wonderful PNB does it more than justice, as usual. The company uses many different casts because of the demanding roles, so seeing it more than once just means you enjoy a new experience and are able to absorb a bit more of the majesty. 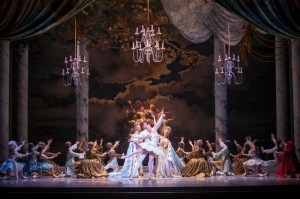 The photos in this post are explained in the order they are seen (below):