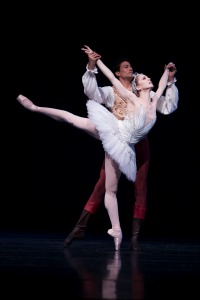 There’s not much more romantic than being swept off your feet by Karel Cruz, even vicariously. As Siegfried to Carla Körbes’ Odette, Cruz and Körbes made the perfect pair of tragic lovers in last Friday night’s opening of Swan Lake at Pacific Northwest Ballet.

The first ballet composed by Peter Ilyich Tchaikovsky in 1875-76, Swan Lake is based on Russian folk tales. It tells the story of Odette, a princess turned into a swan (along with her attendants) by an evil sorcerer’s curse. The only hope for breaking the curse is if a man proves faithful to her, which is where Siegfried comes in. The opening scene is of the prince’s 21st birthday party, during which his mother orders him to get married. In angst at the command, he goes hunting with his friends, and during the night he meets Odette in human form and they fall in love.

The following night at a palace ball the sorcerer shows up with Odile, a black swan who looks nearly identical to Odette (and is played by the same ballerina usually) who convinces Siegfried that she is his true love. He falls for her ruse and realizes too late that the curse on Odette will never be broken and they can never be together, leaving him heartbroken with grief and regret.

Swan Lake is considered to be the greatest of all classical ballets. There is something truly stunning about seeing 24 ballerinas dance in perfect unison, which the bevvy of handmaidens/swans do in the second and fourth acts. The lead female role is incredibly challenging, with Odile performing 32 fouetté, something for which the ballet is famous. And there is plenty to ooo and ahh over in the male leads’ movements.

In addition to Cruz and Körbes, Benjamin Griffiths dances masterfully as the court jester, and Kiyon Gaines is very fun to watch in the part of Wolfgang.