Finding an award-winning locally owned restaurant in Portland, Oregon requires little more than getting off the couch, putting on pants, and walking down the block.  It often seems as though there are more farm-to-table eateries in this town than there are bicycles; more gourmet cupcake shops than Birkenstocks; and more upscale food carts than white people.  And that’s a tall order for a white-washed city on two wheels.

The real trick comes down to telling them apart.* 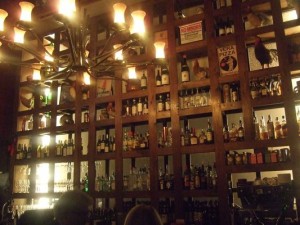 This weekend, however, I had the pleasure of eating at a restaurant that truly broke the mold.  Located on SE 14th and Morrison,  Nostrana sits modestly at the corner of a parking lot lined with a dentist’s office and a stereo store.  But walk inside and (for my Harry Potter fans in the house) it feels like opening the flap of Mr. Weasley’s tent at the Quidditch World Cup.  A wooden plank ceiling sits high above the dining room, opening the restaurant up with an incredible amount of vertical space; and large windows wrap around the south and west corners of the building, filling the seating area with natural light.  The sense of openness extends to the kitchen nestled between a large stone fireplace and a sky-high wooden shelf of adult beverages.  Nostrana, which means ours in Italian, truly feels like an intentionally created, shared, and celebrated space. 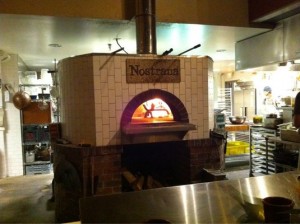 Atmosphere aside, Nostrana is also the brain child of owner and 2011 James Beard Award nominated Executive Chef  Cathy Whims.  Yep, a female chef – an unfortunate rarity in Portland’s high-end cuisine scene.  On September 5 (Nostrana’s menu changes daily), Whims included a mouthwatering roasted lamb with amish butter polenta and baby carrots.  And the tagliata, a flat iron steak dry aged seven days, was cooked to perfection in garlic-rosemary oil.  Keep in mind that I am by no means a foodie, but even I feel compelled to describe Whims’ tasty creations.

For those on a budget, I would suggest at least stopping by for an appetizer.  The insalata caprese and the scamorza cheese are enough to render your most talkative dinner date silent with enjoyment.

So get after it.  Go eat some great food, cooked by a talented lady, in a memorable environment.  You won’t regret it, and chances are – you’ll probably even remember it.

Photos by Jodi V. and  Jose M. via Yelp.

*The restaurants, not the white people.